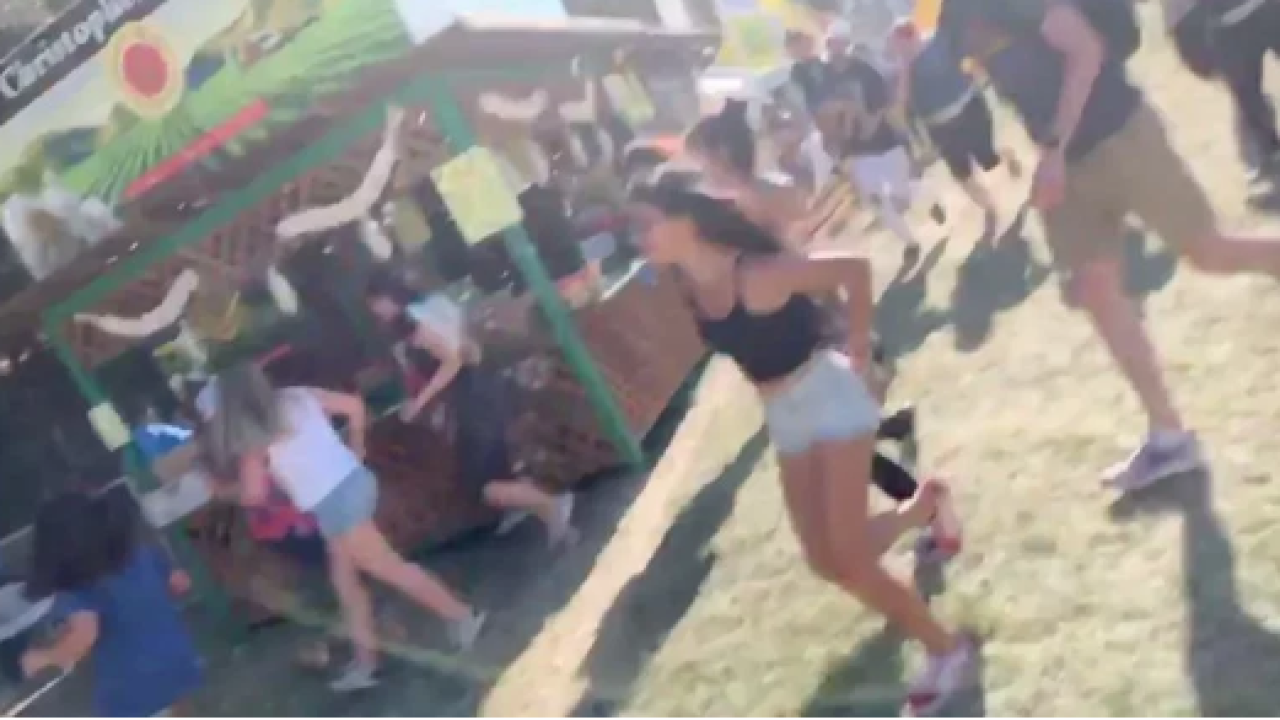 People are seen rushing out of the Gilroy Garlic Festival after reports of an active shooter on July 28, 2019.(Credit: @wavyia on Twitter)

People are seen rushing out of the Gilroy Garlic Festival after reports of an active shooter on July 28, 2019.(Credit: @wavyia on Twitter)

“I do know that the suspect was hit multiple times by the rounds the officers fired, which put him down,” he said. “It appears now, with that ruling on the cause and manner of death, that once he was down, he was able to get a round off and he shot himself. It sounds like that round was to the head.”

The suicide finding contradicts earlier comments from Smithee, made in the hours after Sunday’s shooting, that Legan was shot and killed by officers who engaged him at the festival.

The three officers who responded to the shooting and exchanged fire with Legan were identified this week by Smithee as Eric Cryar, a 23-year law enforcement veteran; Hugo Del Moral, a 17-year veteran; and Robert Basuino, a 13-year veteran.

Related: Gunman kills 3 people – including a 6-year-old boy – and wounds 11 others at California garlic festival

Police found extremist material Tuesday during a search of a Walker Lake, Nevada, home police believe Legan once rented. The home is about 100 miles southeast of Reno.

Because the material seized pertained to different — and at times, competing — political ideologies, authorities have had a hard time nailing down a clear ideology for Legan.

Legan’s social media activity suggests he had xenophobic or racist tendencies, but a neighbor said he and his family seemed like nice people. And while former classmates said he didn’t stand out, a Gilroy High School employee described him as a troublemaker who was “difficult to manage” when he actually showed up for class.

Investigators are continuing their forensic analysis of Legan’s digital media, including his social media posts.

On an Instagram account bearing Legan’s name, created shortly before the Gilroy shooting, a post the day of the attack featured a photo of Smokey the Bear and a sign saying, “Fire Danger High Today.”

The caption read, “Read Might is Right by Ragnar Redbeard. Why overcrowd towns and pave more open space to make room for hordes of mestizos and Silicon Valley white tw**s?”

A mestizo is a person of mixed descent, commonly white and Hispanic or white and American Indian.

“Might is Right,” first published in the late 1800s, has been described as a white supremacist text that promotes anarchy while vilifying Christianity. The book calls Jesus the “true Prince of Evil” and says that the natural order is a world at war in which the strong must vanquish the weak and white men must rule over those of color.