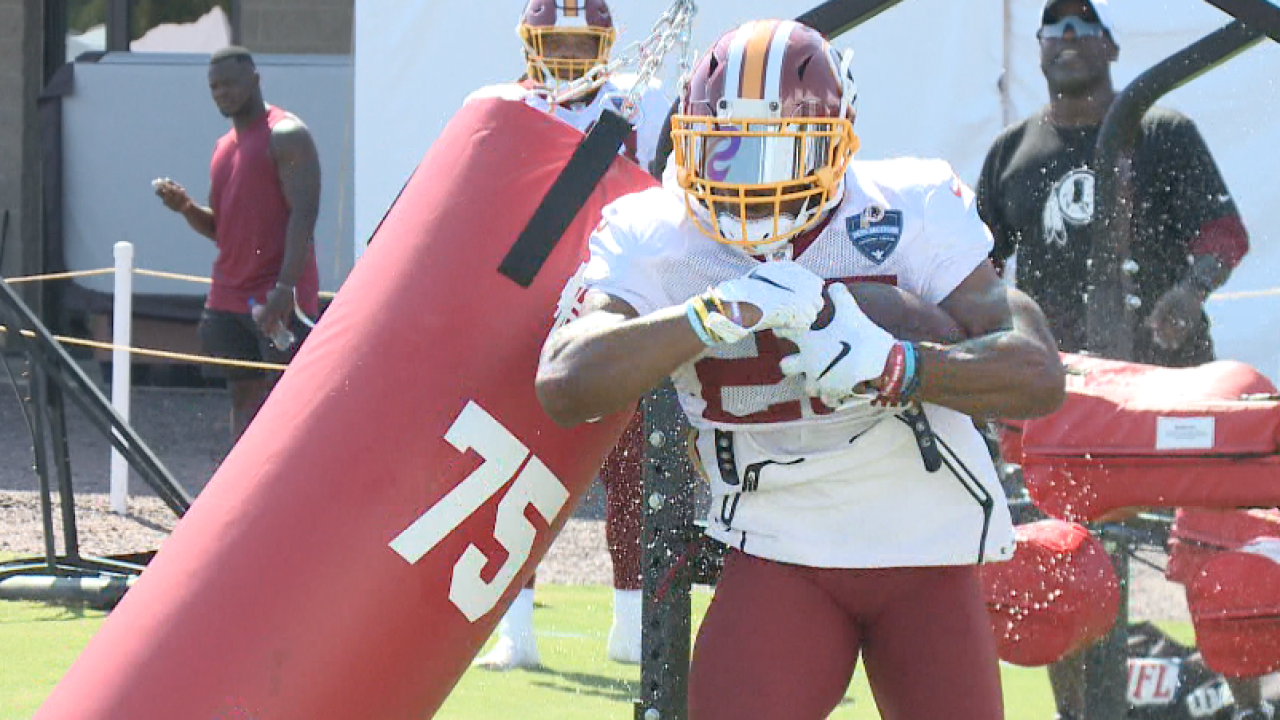 RICHMOND, Va. – With their regular season opener exactly six weeks away, the Washington Redskins will hit the field Sunday for their fourth day of training camp.

Saturday, the team put on the pads for the first time in camp.

“I think you’re really looking for the interior part of it, not so much the outside receivers and all that stuff, but mainly the line, tight ends, linebackers, defensive line, just the thud; getting off blocks, using your pad level and making sure nobody’s playing too high,” Redskins head coach Jay Gruden said of the difference in his team’s workouts once pads are put on. “It forces you to get your pads down which is good. To watch the people shed blocks which is the most important thing in football for defense, shedding blocks. But, we’re still going to run the ball, we’re still not going to take anybody to the ground. It’s just a glorified thud period which is good.”

Cornerback Josh Norman #24 of the Washington Redskins reacts after a play against the Cleveland Browns. (Photo by Mitchell Layton/Getty Images)

Sunday’s 9:45 a.m. practice and 4:40 p.m. walkthrough are the final workouts before the team’s first off day of camp, which occurs Monday.

“Shoot, you can’t say enough about our crew really,” Norman noted. “How we have been able to evolve. I don’t even want to talk about D-line because I get [excited] just talking about those guys because they are just so freakin phenomenal – they really are. Those bulls up front really makes everything go for us. If they can thread through the offensive line like they’ve been doing these past three days; oh man we’re going to be a force to be reckoned with, for sure.”

News 3, Hampton Roads’ home of the Redskins, will have live coverage from training camp each & every day the team practices.

No onesie, errr, no one is more popular with fans here at #SkinsCamp than future @ProFootballHOF’er @AdrianPeterson. Here he is signing an 11 month-old baby following this afternoon’s practice.#Redskins #HTTR @WTKR3 https://t.co/bcg345ppnk pic.twitter.com/5IXNuJ0fjb