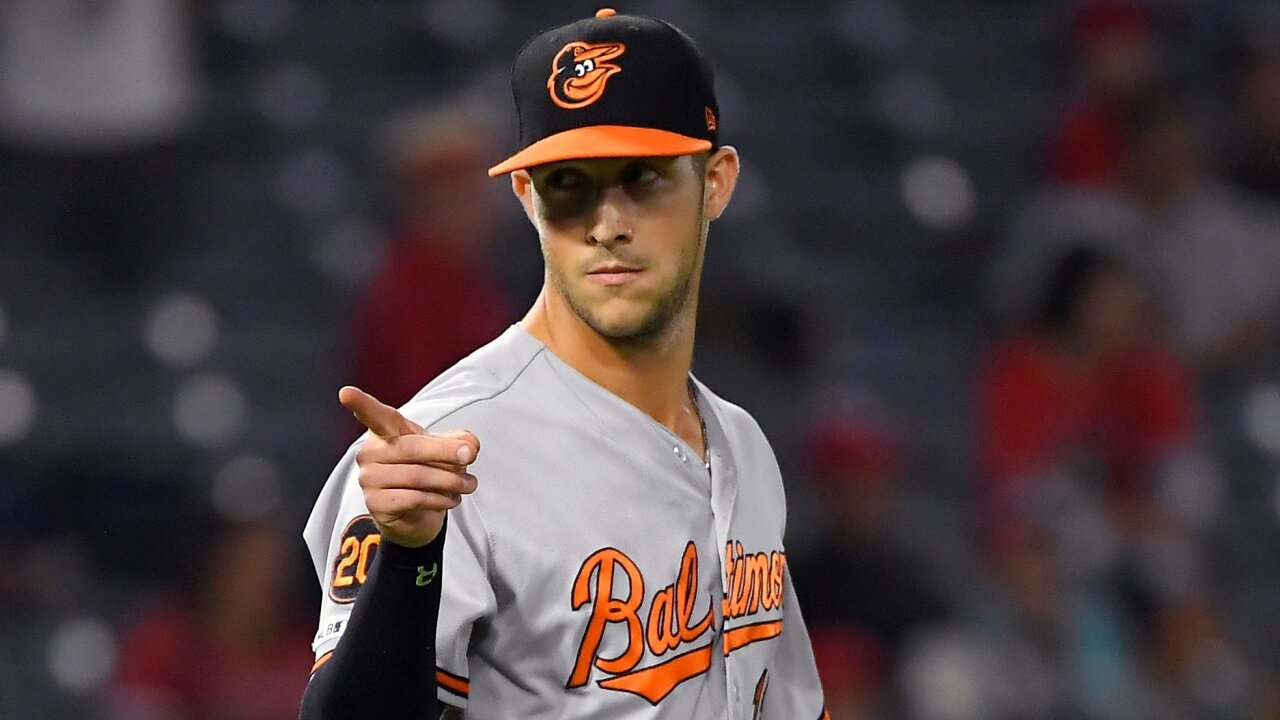 Stevie Wilkerson earned the save after Baltimore defeated the Los Angeles Angels 10-8 in 16 innings.

A former player for the Norfolk Tides had his pitches looking more like lobs, with speeds in the mid-50s, almost reminiscent of a knuckleball — or perhaps throwing to hitters in batting practice.

Stevie Wilkerson earned the save after Baltimore defeated the Los Angeles Angels 10-8 in 16 innings.

That’s understandable, as Stevie Wilkerson is a center fielder for the Baltimore Orioles. Still, he has pitched before at the major-league level — albeit in mop-up duty situations.

This was not one of those times.

It was getting so late it was getting early — as Thursday’s marathon game against the Los Angeles Angels moved into the early hours of Friday — and the Orioles were out of pitchers. It was the bottom of the 16th inning when Wilkerson took the mound with his team up 10-8.

Pitching a perfect inning, Wilkerson became the first position player ever in Major League Baseball to record a save, MLB says. He retired Albert Pujols on a fly ball, ending the game just before 1:30 a.m. local time (4:30 a.m. ET) after six hours, 19 minutes.

“I don’t think I’ve wrapped my head around it yet,” said Wilkerson, who played for the Norfolk Tides on-and-off both in 2018 season and started the 2019 season with the Tides.

Earlier in the night, Wilkerson hit a game-tying double the top of the eighth inning, redeeming himself after misplaying a fly ball that had given the Angels the lead in the seventh. The score continued to climb, but neither team could seize control.

Around the 13th inning in Anaheim, Wilkerson knew pitching may be a possibility, as he went to get his pitching glove. This was his third career pitching appearance, with his last coming on Saturday against the Boston Red Sox.

“I knew we were running thin on guys,” the 27-year-old Wilkerson said. “I knew it was a possibility when the game was getting late.”

In a game where both teams coughed up leads, the Angels had a chance to win in the bottom of the 15th, but David Fletcher was called out at home trying to score on a Mike Trout bases-loaded double. The call stood after review.

The Orioles then took the lead in the top of the 16th with a two-run home run from Jonathan Villar, setting up the save opportunity — which became an official stat in 1969 — for Wilkerson.

“I was just hoping somehow they would hit three balls at somebody,” Baltimore manager Brandon Hyde said. “It’s below hitting speed, so that’s hard.”

Mission accomplished: Fly out, ground out, fly out.

“Just a great, great baseball game,” Hyde said. “A really gutty performance from our guys. It was a boxing match back and forth.”