The Open: Return to Northern Ireland ‘beyond realms of possibility’ 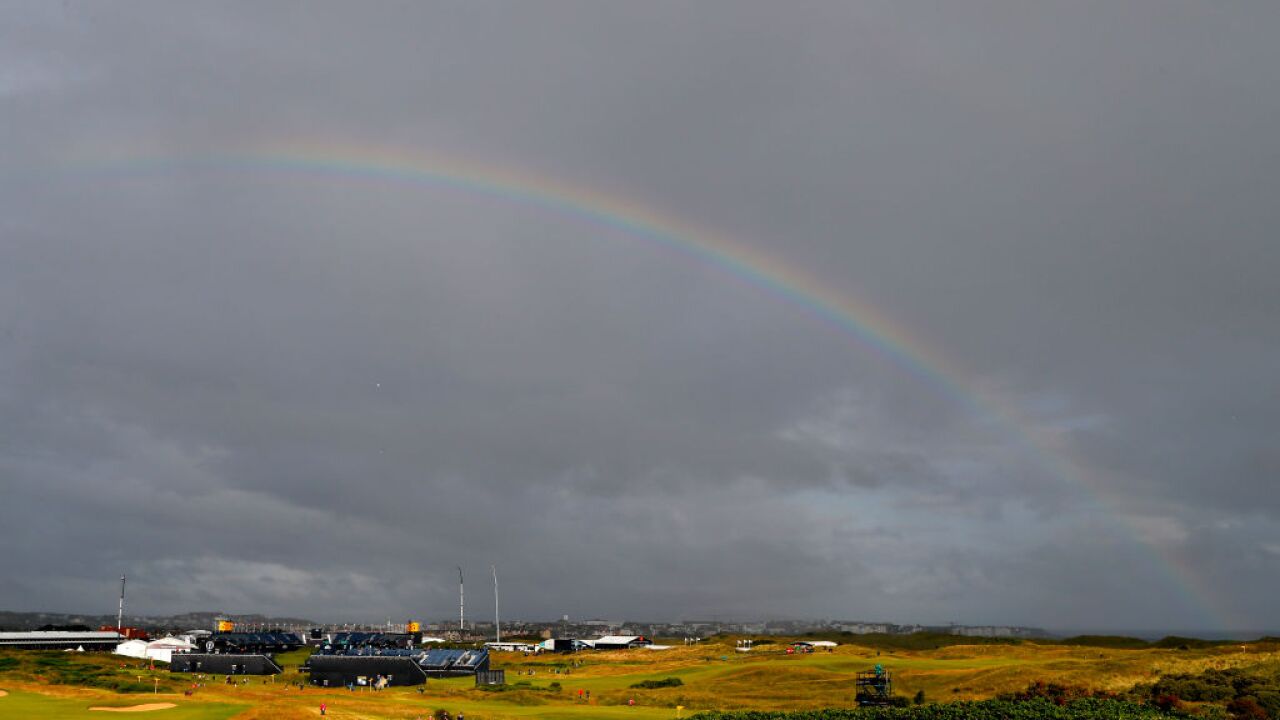 PORTRUSH, NORTHERN IRELAND – JULY 18: A rainbow is seen over the course during the first round of the 148th Open Championship held on the Dunluce Links at Royal Portrush Golf Club on July 18, 2019 in Portrush, United Kingdom. (Photo by Kevin C. Cox/Getty Images)

Not so long ago the notion of staging a huge sporting event such as the Open Championship in a land infamous for bloodshed and violence was unthinkable.

The political and social situation during the period known as the “Troubles” in Northern Ireland made it just too difficult and too dangerous.

“It was beyond the realms of possibility. It was just never going to happen,” said Northern Ireland golfer Darren Clarke, a Portrush resident and Open champion in 2011.

“Portrush had always been on the R&A’s radar as a wonderful golf course,” said Peter Dawson, the former chief executive of the R&A, the Open organizer.

“Time went by and for all sorts of obvious reasons, it was difficult to bring big events to Northern Ireland.”

But the peace that has existed across the province since the Good Friday Agreement in 1998 shifted thoughts back to staging the world’s oldest major for the first time since 1951.

Now, 68 years later, Royal Portrush on Northern Ireland’s north coast is back on the tournament’s rotation of 10 courses in England and Scotland and is set to host the 148th Open Championship, which starts Thursday.

The peace accord, and the staging of the 2012 Irish Open, which attracted 130,000 visitors to the club, opened the R&A’s eyes to the possibilities of staging the Open in Northern Ireland.

It also added to the growing reputation of Northern Irish golf, fueled by the major-winning exploits of its most famous sons Clarke, Rory McIlroy and Graeme McDowell, as well as the twin Open titles won by Ireland’s Padraig Harrington in 2007 and 2008.

Portrush’s own McDowell opened the floodgates with victory in the US Open in 2010, before McIlroy, from Holywood near Belfast, won the 2011 US Open and Clarke clinched the Claret Jug the same summer. McIlroy went on to add the Open in 2014 and two PGA Championships.

All three helped nudge the R&A and will all be the center of fevered attention this week, with world No.3 McIlroy among the favorites to win golf’s final major of the season.

Former European Ryder Cup captain Clarke, who narrowly escaped being caught up in a terrorist bombing as a youngster, has been honored with hitting the opening tee shot Thursday.

“Northern Ireland over the last 70 years is not really somewhere to be proud of,” said McDowell, who was a member of the town’s Rathmore Golf Club growing up, and used to sneak onto Royal Portrush’s celebrated Dunluce links with his brother Gary, now a greenskeeper on the course.

“But for the first time in my life it may be something that I am very, very patriotic about.”

He added: “The buzz has been amazing. I didn’t expect the buzz from fans and how genuinely happy and proud and excited they are to have this great golf tournament in this part of the world.”

When Dawson and his R&A colleagues met with the Northern Ireland Executive in 2014, negotiations were “quite short,” according to the former chief executive of the R&A.

The announcement that Royal Portrush would host the Open was made the following year. It built on the considerable and complicated groundwork of multiple agencies across the province — not least by the club and long-time secretary-manager Wilma Erskine and her team.

“Having the Open back in this country is massive,” said McIlroy. “It speaks volumes for where the country and where the people that live here are now. That’s a wonderful thing.”

Today, with the Open at its door and ranked seventh in Golf Digest’s list of the world’s top courses, it has a turnover of $4.9 million and is on the bucket list of every golfing tourist, Erskine told a BBC documentary “Road to the Open.”

One look over the links of Portrush and it’s not hard to see why.

The championship’s Dunluce course, and its neighboring Valley course, are laid out among the crumpled folds of a vast dunescape gently sloping down to the sea, the fairways draped like velvet ribbons of green among the humps, hollows and wild grasses.

The dramatic coastline takes in the soft sand of Portrush’s numerous beaches, the rocky cliffs to the east and the ruins of Dunluce Castle, and beyond Giant’s Causeway, all framed by the pounding North Atlantic.

Not for nothing has the region been the main setting for the filming of “Game of Thrones,” with nearby Ballintoy, Larryvane and Portstewart Strand among a host of locations in the region.

The Open Championship is said to bring in about $124 million to the host region, according to figures collected by the R&A.

This year’s attendance is projected to be 237,750, which will make it the second biggest in Open history after the 239,000 who attended the 2000 Open at St. Andrews in Scotland.

When Royal Portrush last held the Open, it was won by flamboyant Englishman Max Faulkner in canary trousers and red socks.

Now, with the creation of two new holes — the seventh and eighth — to beef up the challenge, it will be tackled by the biggest stars in the game such as McIlroy, a resurgent Tiger Woods, and the game’s powerful world No.1 Brooks Koepka, whose caddie Ricky Elliott is also from Portrush.

“I don’t think when he grew up that he ever thought there would be an Open Championship here,” said Koepka, who visited Elliott’s parents and took in the sights of Portrush and its infamous Harbour Bar after arriving last week.

“It would be cool to see him win.”

Italy’s Francesco Molinari is the defending champion, but Americans have won nine of the last 10 majors, albeit four of those have come from Koepka. Another American victory this week would mean that for the first time since 1982 the year’s four majors have all been won by US golfers.

Faulkner pocketed £300 ($372 at today’s exchange rate) when he won, but the winner now receives $1.935 million as well as the celebrated Claret Jug and the title “Champion golfer of the Year.”

History has already been made by bringing the tournament back to Northern Ireland.