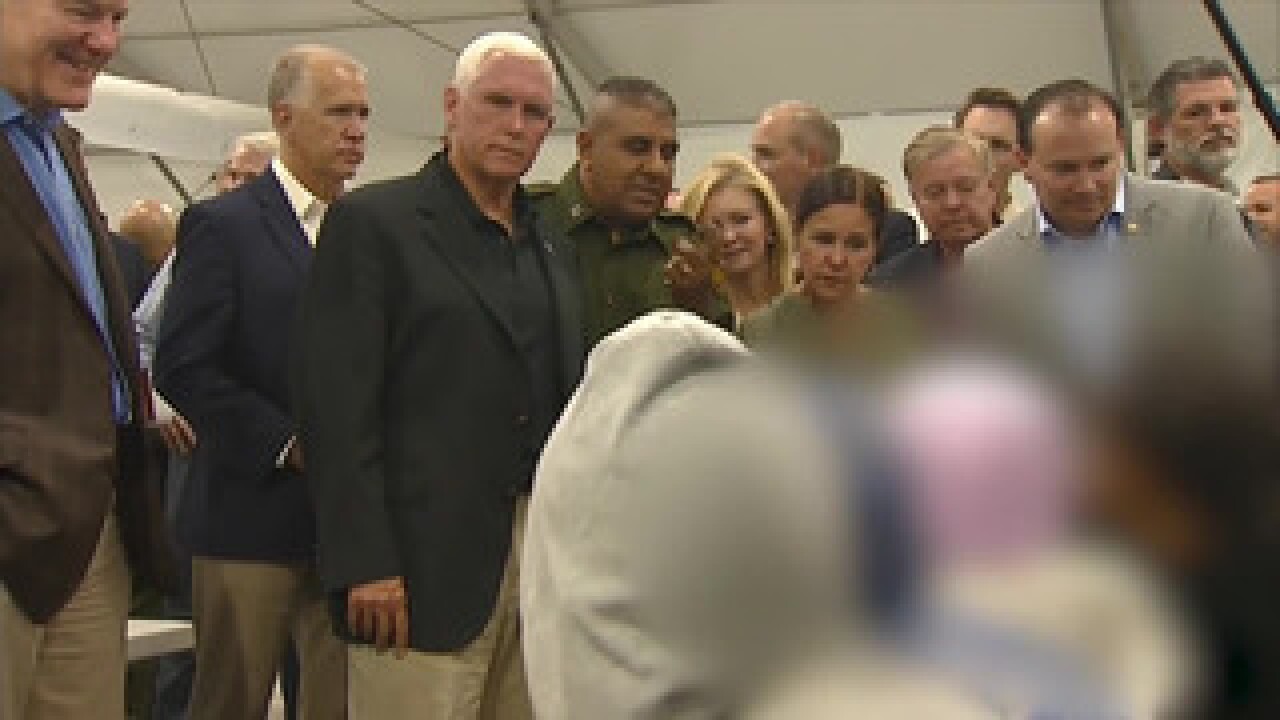 “To be honest with you, I was not surprised by what we saw,” Pence told reporters Friday, citing the humanitarian crisis and congestion. “This crisis is real, the time for action is now.”

In McAllen, it was a much different scene: Pence toured a swelteringly hot room called a sally port with hundreds of men, a strong smell of sweat and overcrowding so extreme there was no room for cots, the migrants left to sleep on concrete beneath mylar blankets.

“The Vice President’s office specifically instructed CBP to not clean up or sanitize the facility beyond what is routine so the American people could see how serious the crisis at our border is (overcrowding, lack of resources, beds),” an administration official said in an email, noting there were Secret Service concerns over Pence entering the sally port, but the Vice President’s office pushed for press access.

‘Time for Congress to act’

Asked by CNN whether the conditions for the detained single adult immigrants were acceptable, Pence said no.

“No, it’s not. That’s the reason why we demanded that Congress provide $4.6 billion in additional support to Customs and Border Protection,” the vice president said in an interview following both tours and a roundtable with Border Patrol officials. “The McAllen station, where our cells are overflowing … ought to be a very clear message to every American that the time for action is now and the time for Congress to act to end the flow of families that are coming north from Central America to our border is now.”

Pence’s visit comes ahead of Sunday’s scheduled ICE raids targeting migrant families with court-ordered removals that had previously been called off by President Donald Trump. The upcoming ICE operation is expected to target approximately 2,000 people and take place over several days in major cities across the nation.

Advocacy groups have been hosting “Know Your Rights” trainings and circulating fliers and social medial posts with guidelines about what they say immigrants should do if ICE agents show up at their door.

Pence would not answer four repeated questions from CNN on whether the Sunday ICE raids will separate families.

“The upcoming efforts are going to focus exclusively on individuals who have been fully adjudicated and ordered by a judge to be deported,” he said.

Pence said ICE will prioritize immigrants with deportation orders who have also committed crimes in the US, though he was vague on whether those who had not committed crimes could be targeted as well.

“These will be individuals who are facing a deportation order, and the priority that Homeland Security and ICE will be placing will be on those individuals that have also committed crimes in this country, and represent a threat to our communities,” he said.

In McAllen, Pence did not engage directly with any of the men, but he did speak with some of the children and mothers in Donna, asking them if they were well cared for. They all nodded yes. Children told him their journey to the United States by foot took two and three months. In Donna, there were rooms filled with health supplies, snacks and changes of clothes for the migrants, many of whom had arrived at the facility with shoes and pants crusted in mud from the journey.

Donna was one of the facilities built to accommodate the recent large increase of family crossings. Standing in a supply room in front of a wall stacked with Kool-Aid Jammers, Pence asked officials whether the children in custody are receiving adequate meals and snacks. They answered affirmatively. The level of care at Donna hasn’t necessarily been the case for children at other facilities.

Yazmin Juarez, a mother whose toddler died weeks after they were released from ICE custody in 2018, recalled the death of her child in emotional testimony before a House panel Wednesday.

“I watched my baby girl die, slowly, and painfully, just a few months before her second birthday,” she said through an interpreter, later beginning to cry recounting her 19-month-old daughter being admitted to the ICU.

And in testimony from Elora Mukherjee, attorney and Clinical Professor of Law at Columbia Law School, at a House Oversight Committee hearing on the border on Friday, Mukherjee said that in her interviews with hundreds of immigrant children and families that many children in custody are embarrassed to use the toilets because “they are open” and have no privacy.

The men in the sally port in McAllen told CNN they had been in Customs and Border Protection custody for more than 40 days. They said they hadn’t had access to showers or toothbrushes. They yelled before reporters that they were hungry.

“This isn’t human. I’m not a terrorist,” one man said.

Patrol agent in charge Michael Banks disputed some of those characterizations. He said a trailer with showers had arrived Thursday, though it was possible some of the men had not bathed yet. He said there were 88,000 disposable toothbrushes on site and that the migrants got three hot meals a day from local restaurants. He said the space, which, despite the heat, does have air-conditioning, was cleaned three times a day. He said none of the migrants had been there longer than 32 days.

The trip came weeks after unannounced inspections of Border Patrol facilities by an internal Department of Homeland Security watchdog found extreme overcrowding and children younger than 7 being held in custody for longer than two weeks — far more than the allotted 72 hours — among other “urgent” issues discovered. The watchdog found additional violations of detention policy, such as a lack of hot meals, inadequate access to showers and limited access to a change of clothes.

Additionally, images of squalid conditions and thinly stretched resources found in news reports and congressional Democrats’ descriptions of their own visits have captured the nation’s attention.

Pence said there should be the “same standard of care” for both families and single adults, defending the disparate conditions.

“What you saw today was a very clean facility where people were being detained indoors, and then you saw a temporary facility that was constructed because this facility is overcrowded. And we can’t keep people in a cell beyond what the rules and regulations allow for, but everyone in that temporary facility is getting health care, they’re getting hygiene and the Customs and Border Protection is doing their level best in an overcrowded environment and a difficult environment to address this issue, but Congress has got to act,” he said.

The images of the vice president walking through the Donna facility Friday stand in stark contrast to photographs of overcrowded conditions facing families with children by DHS inspector general just weeks before. Overcrowded conditions have eased considerably following the movement of most migrant children to Health and Human Services facilities thanks to new funding from Congress. There was a 28% drop in numbers of migrants apprehended at the border in June, in part due to the season, but also, Pence said, because of support from Mexico.

Pence said he had read the report, but added, “I can’t account for that,” when pressed by CNN about images of conditions similar to those of the McAllen facilities for families with children featured in the DHS inspector general’s report.

“The facility you saw today represents the level and the standards of care that we are working to bring to all those caught up in this crisis. Remember, it was just a few short weeks ago that Congress finally acknowledged the crisis and gave us an additional $4.6 billion in humanitarian aid. Now we’re going to continue to improve, we’re going to continue to provide care at the standard the American people expect,” he said, calling on Congress to overhaul asylum laws and close what he characterized as legal loopholes.

Officials say the overcrowding among children has largely been alleviated because of the supplemental funding that Congress just passed. As a result, most have been moved out within the 72-hour time limit to HHS facilities.

Though Pence’s office also extended invitations to Senate Democrats for the Friday visit, none were in attendance, underscoring the highly politicized situation as the humanitarian crisis at the US-Mexico border unfolds. A group of congressional Democrats will tour the area Saturday.

Democratic Sen. Mazie Hirono of Hawaii had told CNN Thursday she did not want to be part of a politicized trip.

“I don’t want to participate in what is basically the Trump show, the Trump-Pence show. What do you think they are going to see? You have a President saying, ‘Everything’s just fine. These facilities, these detention centers are just being run great.’ Yeah, that’s what they’re going to see. But we know from all of the reports that things are not great,” she said.