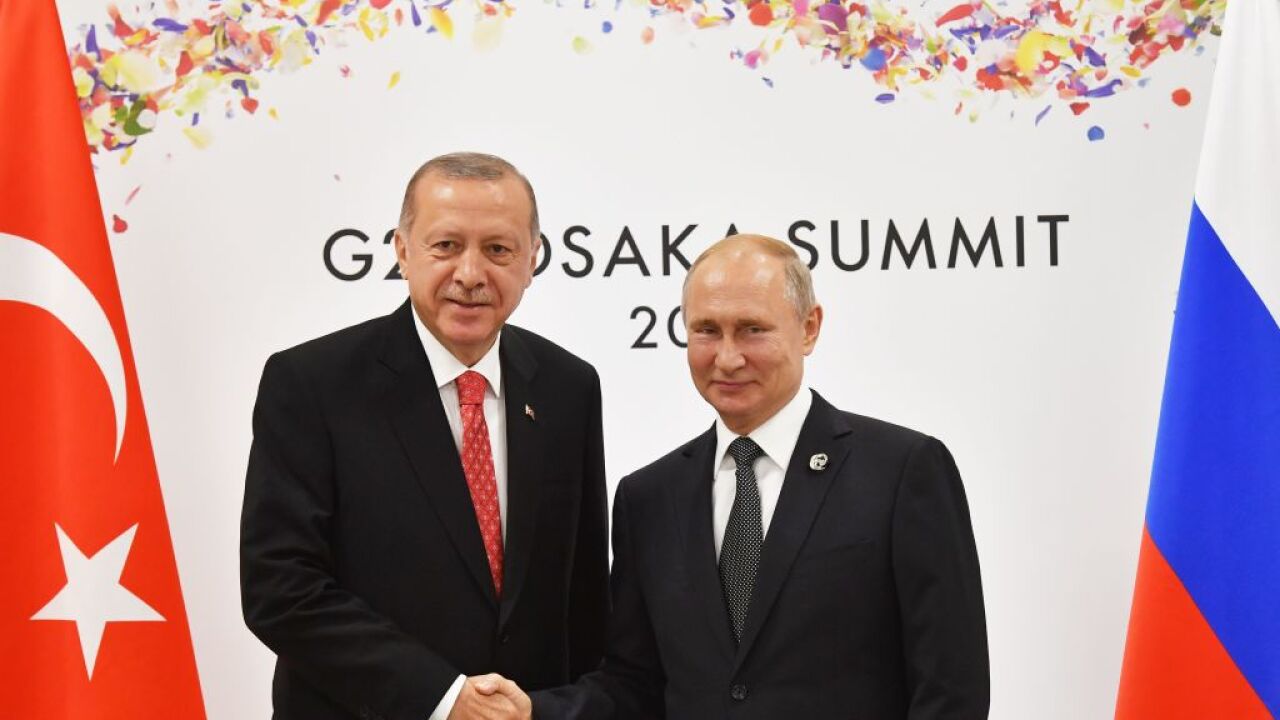 The first shipment of the Russian-made S-400 air defense missile system has landed in Ankara, in a move that sets up a potential showdown between Turkey and the United States.

The equipment arrived at the Murted Air Base on Friday, according to the Turkish Defense Ministry.

Turkey’s decision to purchase the equipment solidifies ties that have been developed between Russia’s President Vladimir Putin and his Turkish counterpart, Recep Tayyip Erdogan, and is just the latest setback to US-Turkish relations which have seen the two NATO allies at odds over issues such as Syria.

The US has long warned that Turkey risked being blocked from receiving the advanced F-35 stealth jet due to Ankara’s insistence on acquiring the Russian missiles — a system US officials fear could be used to analyze and collect intelligence on the F-35.

A NATO official told CNN on Friday that: “It is up to allies to decide what military equipment they buy. However, we are concerned about the potential consequences of Turkey’s decision to acquire the S-400 system.”

The official added that, “interoperability of our armed forces is fundamental to NATO for the conduct of our operations and missions.”

How the US could react

The Pentagon could formally suspend Turkey from participation in the F-35 program altogether.

Touted as the future of military aviation, the F-35 jet — which is the most expensive weapons system in history — is a lethal and versatile aircraft that combines stealth capabilities, supersonic speed, extreme agility and sensor fusion technology, according to its primary contractor Lockheed Martin.

The plane, which maintains stealth capabilities making it harder for enemy radars to detect, has been a favorite of President Donald Trump, who has lauded the F-35 several times for being “invisible.”

The US had consistently told Turkey that the S-400 was incompatible with NATO systems.

During a visit to NATO headquarters in Belgium late last month, acting Secretary of Defense Mark Esper said: “If Turkey accepts delivery of the S-400, they will not receive the F-35. It’s that simple.”

Turkish F-35 students, maintenance personnel and instructor pilots that had been training in the US could also be sent home.

Yet despite those warnings, senior Turkish officials had long expressed optimism that the Trump administration would not follow through on its threat to expel Turkey from the jet program, saying that the US President had promised to resolve the issue while also pledging not to integrate the S-400 with any NATO systems.

US defense officials last month said the US was still determining what to do about the four F-35 aircraft earmarked for Turkey that had remained in the US to facilitate the training of Turkish pilots at Luke Air Force Base in Arizona.

The US is expected to level sanctions against Turkey over its acquisition of the Russian system, penalties mandated by the Countering America’s Adversaries Through Sanctions Act (CAATSA) which penalizes countries that purchase military equipment from blacklisted firms.

Ellen Lord, Under Secretary of Defense for Acquisition and Sustainment, told reporters at the Pentagon last month that “there is strong bipartisan US congressional determination to see CAATSA sanctions imposed on Turkey if Turkey acquires the S-400.”

Sanctions could severely hurt Turkey’s economy, which is suffering from the fallout of Erdogan’s recent move to sack the governor of the Turkish Central Bank.

The Pentagon had already begun suspending Turkey from some aspects of the F-35 program and announced last month that Ankara had until July 31 to reach a mutual agreement with the US over the purchase of the Russian system, but said that the suspension could come in advance of that if Turkey were to take delivery of the missile system before then.

If the US ejects Turkey from the program, Ankara will not only be prevented from fulfilling its plans to acquire some 100 aircraft but Turkish companies and component manufacturers, which have been involved in the plane’s development will lose out on significant business opportunities.

In April, Vice President Mike Pence warned that the expulsion of Turkey from the joint F-35 program “will harm not just Turkey’s defense capacity, but it may cripple many of the Turkish component manufacturers that supply that program.”

Turkish Foreign Minister Mevlut Çavuşoğlu said in April that Turkey had already invested “$1.2 billion and another $2.3 billion is on the way and we have actually fulfilled all our obligations as one of the countries which is in the (F-35) program.”

The US Defense Department has said that more than 900 of the jets parts, including elements of the landing gear and center fuselage, are produced by Turkish industries with “a little over 400 of them” being “sole-sourced.”

Lord said the Pentagon is actively working “with Lockheed Martin on the aircraft side, with Pratt & Whitney on the engine side, to find alternate sources” for the Turkish produced parts.

She also said the program could rely on alternate depots in Europe to make up for the loss of a Turkey-based parts depot that was meant to support the aircraft’s sustainment.

What does it mean for Turkey’s standing in NATO?

Turkey’s purchase of the S-400 missile system opens up wider questions concerning Turkey’s diplomatic path, as this sale marks another edge towards autocratic regimes like Russia.

Erdogan’s jailing of journalists and authoritarian have already clashed with key tenants of NATO’s membership, which carries with it obligations of democracy and human rights.

But, more importantly, NATO’s mission since inception is to defend other member states from Russian encroachment.

So a key NATO member, with Turkey possessing the second largest standing army and being its only Muslim member, actually courting Russian hardware could be beyond the pale for many NATO members .

But it appears that Erdogan seems to think the payoff from playing Moscow against Brussels and Washington is greater than potentially being cast out of the world’s largest military alliance.

How has the Kremlin responded?

Russia has said that the deal is only commercial and that it is fulfilling their obligations under the contract.

The Federal Service for Military-Technical Cooperation confirmed the start of deliveries of the S-400 to Turkey on Friday, according to Russian state news agency RIA Novosti.

The Kremlin has largely stood back from Friday’s drama, however, watching a wedge being driven in this important Western institution.