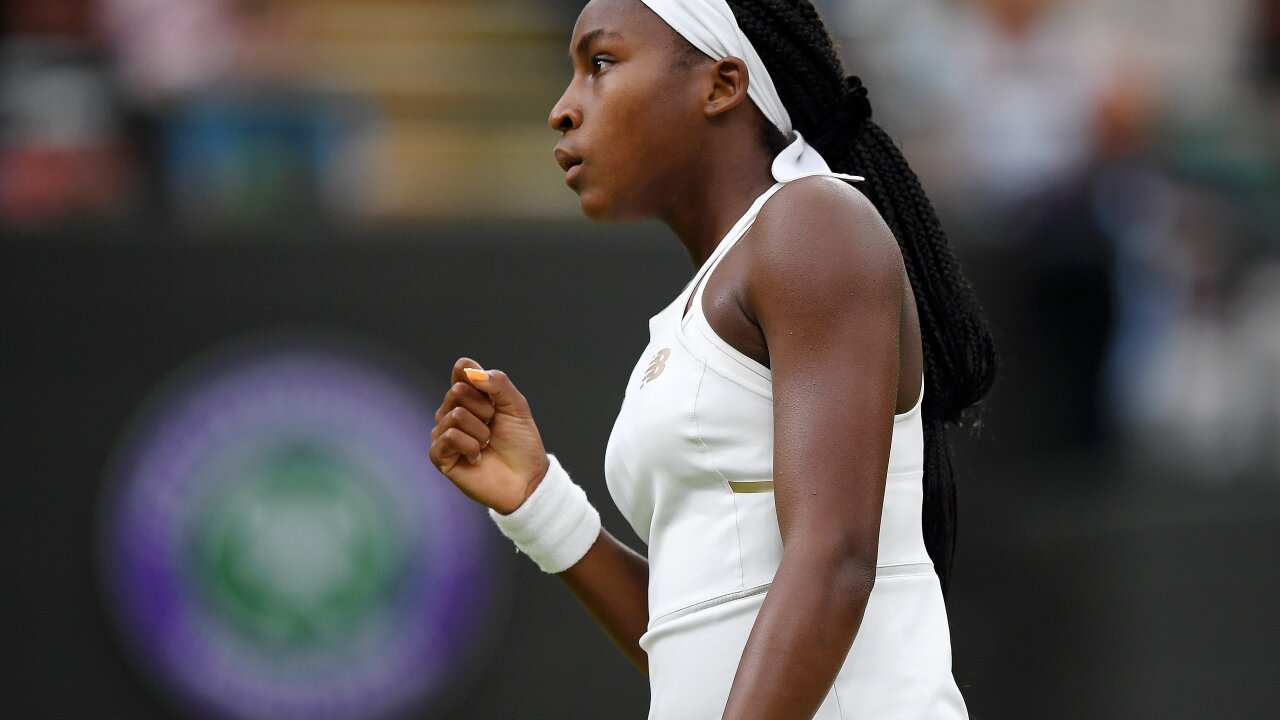 Cori Gauff beat Magdaléna Rybáriková in the second round of Wimbledon.

Even a late change of location Wednesday couldn’t halt the momentum of Cori Gauff, the teenager making history virtually every time she steps onto Wimbledon’s fabled grass.

Already the youngest ever to emerge from qualifying and youngest since 1991 to win a match in the main draw when she beat idol Venus Williams, the 15-year-old American became the first player to win a full match under the oldest grand slam’s new Court One roof.

Cori Gauff beat Magdaléna Rybáriková in the second round of Wimbledon.

It was another straight-set victory, too, 6-3 6-3 over Magdalena Rybarikova.

The 30-year-old Slovak’s ranking might have slipped to 139th in the world, but in 2017, she found herself in the last four at Wimbledon.

“I don’t even know how I played, if I played better or not,” Gauff said. “I like to say maybe I played a little better.”

“Amazing” was how the USTA’s general manager of player development, Martin Blackman, summed up her performance.

“After she had a huge win like she had in the first round, to come back with that much poise against a woman who got to the semis here two years ago and who is very good on grass, it’s just remarkable,” Blackman said.

Will Gauff emulate Jennifer Capriati’s semifinal achievement of 28 years ago?

We’ll know more over the coming days but one thing is already certain: Wimbledon fans are head over heels for the player nicknamed “Coco.”

“She’s such a gracious young lady, great sportsmanship,” he said. “We saw a couple of times when Rybarikova hit great shots that Coco kind of clapped with her racket, really classy. But I think they just love seeing a young woman like that who is so gifted, such a great competitor.”

Cries of “Come on, Cori” broke the silence between points, and a hush descended when Gauff slipped and did the splits late in the second set.

A thumbs up, to their relief, confirmed that she was OK.

And when Rybarikova double-faulted to bring up a first match point at 5-3 in the second, the decibel level rose with cheers — and applauding on double faults usually contravenes tennis etiquette.

Gauff smiled and waved to her new adoring public as she left the court about 9.15 p.m. local time, probably not far off her usual bedtime.

“That smile at the end said everything,” Blackman said.

It was an ‘A’ performance from Gauff, who took a science test during her qualifying run while reaching the main draw.

She was due to face Rybarikova on Court Two — still a big stage, especially for two unseeded players — but organizers shifted the contest to the second show court when matches on Court 2 ran late.

She looked at home in only her second ever Grand Slam outing.

Many a player before her has struggled to follow up massive victories, but Gauff seems a character hard to ruffle.

“I could lie and say I felt normal,” Gauff said. “It was honestly so hard just with social media and everything trying to focus on [Wednesday’s match] because people are still posting about Venus.

“I wasn’t expecting any of this. A lot of celebrities were [direct messaging], posting me. I’m kind of starstruck.”

As news filtered across the grounds that an extra match would be played on Court One, a 40% full stadium became around 80% by the time the first set ended.

This after Serena Williams, Venus’ younger sister, spoke highly of her over the weekend.

She was exquisitely efficient, and the variety on her backhand is stellar, not to mention her movement. She even felt comfortable sliding on grass, considered by many players to be the trickiest surface to move on.

When Gauff needed to relieve pressure at 2-1, 30-30 in the second set, she struck an ace. A “come on” followed, and there were two more in that game, one following a sizzling forehand winner that allowed her to hold serve.

But perhaps her loudest roar came at 3-2, deuce, when an ace flew off her racket immediately after she was run ragged by Rybarikova on a drop-and-lob combination. She never faced a break point.

As she neared victory and chased another drop shot, another fan encouraged her to “run, run, run.”

Gauff’s reply found the net, but it was one of the rare occasions when Rybarikova’s drop shot, one of her favorite strokes, stymied her opponent.

It’s hard to believe that when Gauff was 7, mom Candi said, she was the worst player in her tennis program.

Mom did track and field at Florida State while dad Corey played basketball at Georgia State.

Their athletic pedigree has surely aided Gauff, along with their daughter’s resolve.

She soon reached No. 1 in the junior rankings and at the age of 13 became the youngest US Open junior finalist.

Tennis has seen its fair share of young stars come — but then go with little fanfare.

Only the years ahead will give us a final verdict on Gauff, yet for the time being, the feel good story of Wimbledon rolls on.

And the question now is, what history will she make when playing Polona Hercog — who upset Madison Keys — on Friday?

“All eyes are on her, and she’s handling it really good,” said Hercog’s coach, Zeljko Krajan. “It seems like she enjoyed the matchup with Venus on such a big court. It’s really only big players or so-called champions who can do that.”