England vs. USA: English women chase World Cup history against ‘the team everyone wants to beat’ 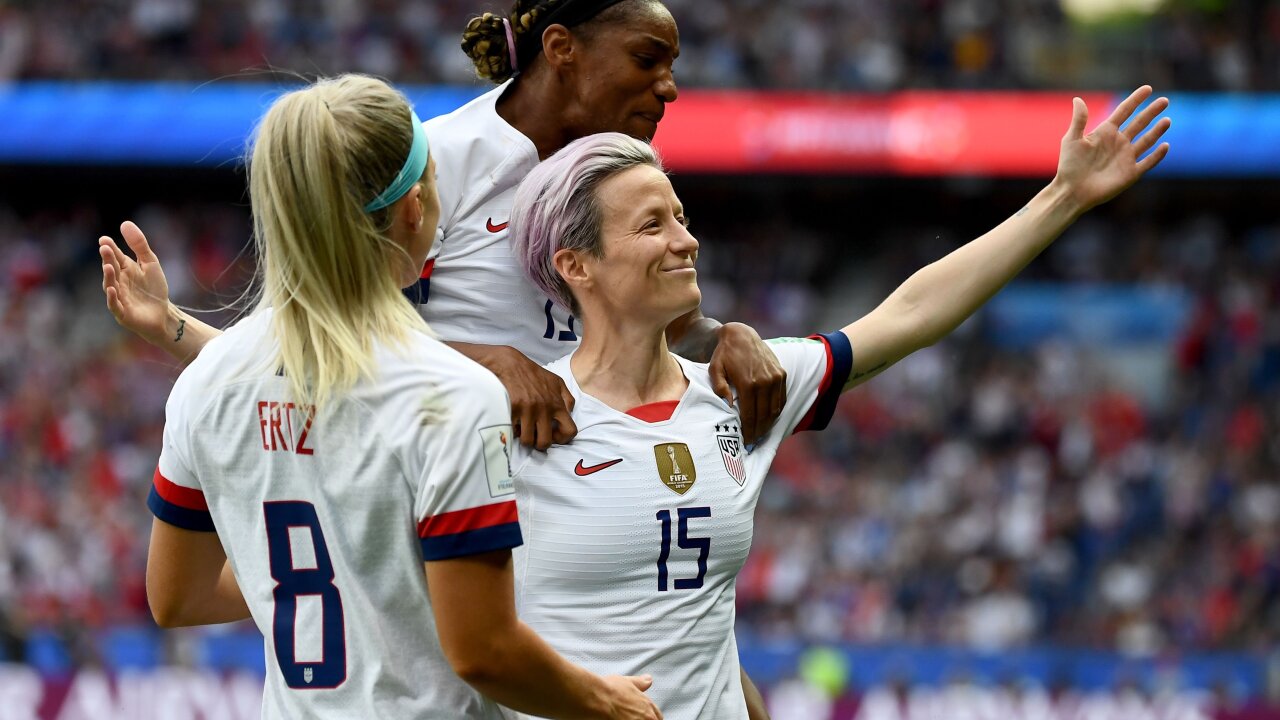 All eyes now turn to Lyon, France’s culinary capital and host city to a semifinal in which arguably the two best teams remaining in the competition scrap it out for a place in the final. A confident England awaits.

If the US is to successfully defends its title, it will certainly have done it the hard way because should the defending champion see off Phil Neville’s team, it will have beaten the No 4. (France) and No.3 (England) ranked teams in the world in the knockout stages.

The USWNT has been the dominant force in the women’s game since the first Women’s World Cup in 1991 but England poses a real threat after ruthlessly dispatching Norway 3-0 in its quarterfinal. Neville’s players are chasing history as well — aiming to become the first senior England side since 1966 to reach a major football final.

Like any match which induces feverish excitement days before kickoff, there are also plenty of subplots which make for a fascinating contest.

“It’s not etiquette, really, is it?” said England boss Neville in response to two US staff members being spotted at England’s team hotel in Lyon. The build up to a big match isn’t quite the same without a ‘spygate’ headline.

US coach Jill Ellis told reporters that they were looking at the hotel as a potential base before Sunday’s final in Lyon and played down suggestions that such preparedness hinted at arrogance.

“I think that’s important, to do your job. So, in terms of arrogance, I think that’s got nothing to do with us. That’s planning and preparation for our staff, so I think that’s pretty normal,” she told reporters Sunday.

Neville conceded that scouting the hotel would not give the US an “unfair advantage” in the semifinal.

“The only thing I would say is it’s not something that I would want my team ops person doing. We’re happy with our hotel. So, I hope they enjoyed the hotel,” Neville said.

Rapinoe vs. Bronze – A mouthwatering battle

Megan Rapinoe has dominated the headlines this last week.

First a video of the US co-captain saying she wouldn’t go to the White House should the US win the title went viral. Then US President Donald Trump responded to stoke the flames before Rapinoe became the match-winner Friday by scoring both goals in the 2-1 win over France. Rapinoe’s brace meant the 33-year-old has been directly involved in 14 goals in her last 16 appearances at the Women’s World Cup.

“Fantastic,” was how Ellis described her forward’s performance in that heavyweight battle. Hollywood star Zac Efron tweeted that he was going to dye his hair purple in homage to the winger. Indeed, after her scoring feat and arms-outstretched goal celebration against France, social media was awash with people voicing their admiration for Rapinoe.

That England right back Lucy Bronze produced a stunning performance, scoring a sublime goal to boot, against Norway went largely unnoticed everywhere other than in England.

In Tuesday’s semifinal, Bronze, who plays for European champion Lyon, will likely to be tasked with marking Rapinoe. However, Neville suggested in his press conference Sunday that he may select Rachel Daly, who played at right back when England drew with the US in the SheBelieves Cup earlier this year.

Is the England boss playing mind games? Perhaps. After all, he did play under Sir Alex Ferguson at Manchester United, the master of mental manipulation.

“I do believe Lucy’s the best player in the world. She’s unique in almost everything she does,” said Neville of his defender. “If you look at the left-hand side of the USA and the right-hand side of England, I don’t think you’ll get a better left and right in women’s football.”

Ellis’ accent, a curious mix of an American drawl and clipped English, hints that the 52-year-old did not spend her formative years in the US. It is the result of a childhood spent in Portsmouth, on England’s south coast, and of nearly 40 years living in the US.

She migrated in 1981 with her family to the Washington, D.C. area. Her father John is a former Royal Marine who used to work for the English Football Association. He set up a football academy after moving to the US and was assistant coach to the USWNT at the beginning of this century.

Had her family not moved, Ellis has admitted her career path may have been very different.

“I truly think if I’d have stayed in England, I’m not sure I’d would be in coaching,” she told reporters. “At the time, it was not even a career path. It was a rare career path in the States, but it wasn’t a career path [in England] for sure.”

Ellis has faced England before, five times since 2014, but never in a major tournament. Asked Friday how she felt about facing her home nation, she bristled: “I’ve got US citizenship, brother.”

Having overseen 125 games, no one has coached more games for the USWNT than Ellis, and only Tony DiCicco has more national victories with 105. Ellis is unbeaten in 12 Women’s World Cup games and the 2015 FIFA World Coach of the Year for Women’s Football is aiming to become the first to win the World Cup twice. The coach who was made in America is two games away from history.

Thorough and organized, England’s head coach is the sort of person who prepares for all eventualities. Ever since Neville was appointed in January 2018, the 42-year-old has been plotting England’s path to World Cup glory.

With no previous experience in women’s football or management, and despite initially not having applied for the job, Neville became the most high-profile England women’s manager in history.

But it was a bumpy start for a man who, if rumor is to be believed, emerged as a candidate after a well-known broadcaster lightheartedly suggested him to FA bosses during a Christmas party. Within 24 hours of getting the job in January, the father of two was forced to make a public apology for Twitter comments made in 2012 which had prompted a sexism row. He weathered the storm.

Speaking to CNN in December, the Englishman said one of his motivations was to “prove people wrong that doubted me.” He has silenced the naysayers by guiding England to the semifinals without much trouble.

For a man whose playing career yielded 59 England caps and 10 major trophies with Manchester United, Neville’s standards are unsurprisingly high. He told reporters that not reaching the final would be considered a failure, adding: “Nobody cares who loses a semifinal, it’s all about winning. No one cares about silver and bronze. It’s the gold medal everyone wants.”

Battle for the golden boot

It’s a four-way tie at the top of the scoring charts, and three of the World Cup’s leading scorers will be playing Tuesday.

Alex Morgan, Megan Rapinoe and Ellen White have all netted five times in four games in this tournament. All of Morgan’s goals came in the 13-0 thrashing of Thailand, while Rapinoe scored twice in back-to-back games to add to her goal against Thailand.

England striker White has been consistently ruthless throughout.

“Ellen White is obviously coming into this next game really confident,” Morgan told reporters Sunday. “She has gained that starting spot and that’s huge. We have to look at her because of the goals she is scoring.”

Can the US be beaten?

England has never progressed beyond the semifinals, its best finish being third after beating Germany in the third-place playoff four years ago.

The US is a three-time World Cup champion and has lost just once to England. In their only World Cup encounter in 2007, the US prevailed 3-0. But England’s performances in the SheBelieves Cup earlier this year, where England drew 2-2 with the US, will give Neville hope.

But the US’ record at the World Cup is an intimidating one. The US has reached the finals four time in seven tournaments and in beating France the team tied the record of 10 successive World Cup victories. Indeed, the US has only lost once in 43 matches, a friendly defeat against France in January.

Former World Cup winner Abby Wambach has described this US team as the greatest in the country’s history. After the US beat Chile 3-0 in the group stage — when coach Ellis made seven changes to the starting lineup — defender Ali Krieger said the Americans had “the best team in the world, and the second-best team in the world.”

But there is a chink in the US armor — as Spain and France found by breaching its defense — and a predator such as White will pounce on any lapses.

Spain scored courtesy of the US defense being sloppy in possession near its own goal, while France halved the deficit from a set piece. England will have taken note and the US’ defenders and goalkeeper Alyssa Naeher will no doubt be put under pressure.

There is a sense that England needs to score first Tuesday because, as France found, attempting to catch the US once it has taken the lead is a formidable task. Around the hour mark against Les Bleues, the US retreated to a five-person defense and had the midfield dropping back to help. It was a conservative, but effective, approach.

Former US goalkeeper Hope Solo has suggested England needs to change its pleasing-on-the-eye style and be more direct if it is to beat the US. Neville has ruled that out. “The style is non-negotiable however far we go,” he said.

The mind games have started, the statistics are being mulled over. All the ingredients are there for a World Cup epic.