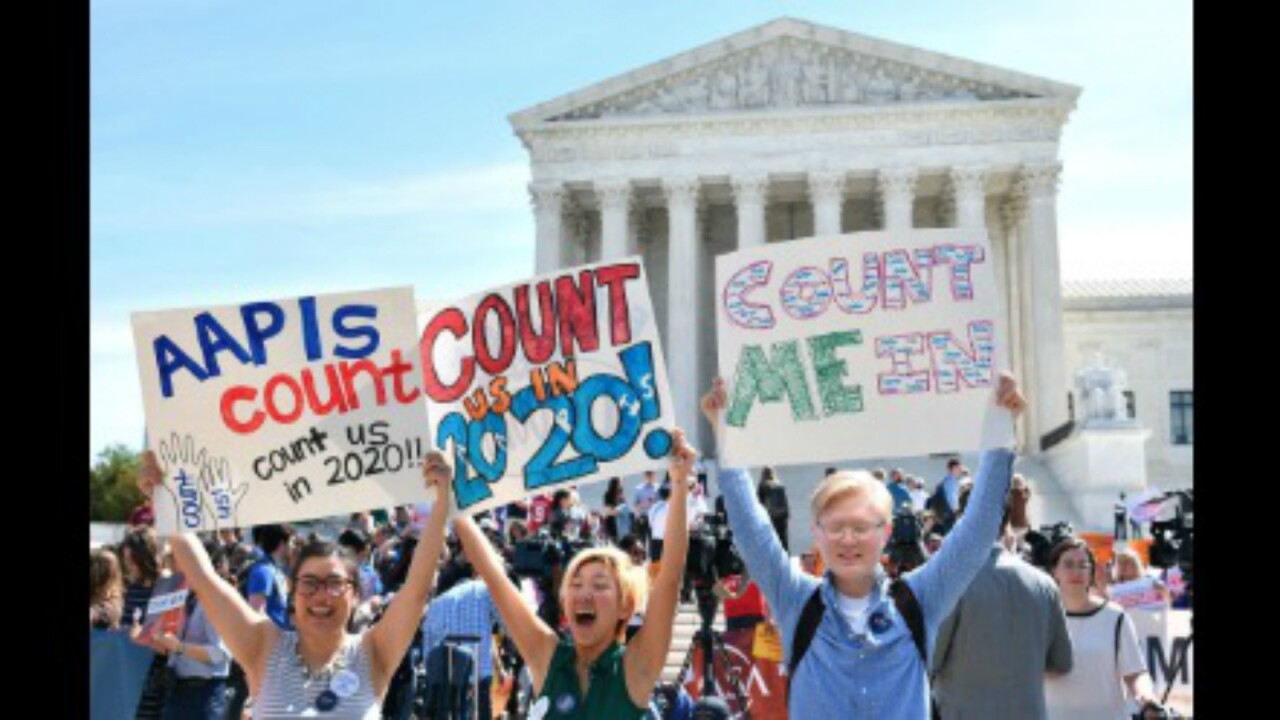 WASHINGTON – The Supreme Court has blocked a citizenship question from being added to the 2020 census for the time being in a major setback for the Trump administration.

The bitter controversy centers around whether the administration can ask all recipients a citizenship question on the 2020 census for the first time since 1950 — a move that could impact the balance of power in states and the House of Representatives, which are based on total population. Adding the question, critics say, could result in minorities being undercounted.

Writing for a 5-4 majority, Chief Justice John Roberts concluded there was sufficient reason for concern about why the Commerce Department wanted to add the question. Roberts had the support of the four liberal justices.

Supreme Court justices issued rulings on two major cases during their final day of the term, both dealing with partisan politics. Roberts split his votes, siding with conservatives on a major decision allowing severe partisan gerrymandering, and then crossing ideological lines to side with liberals on the census case.

“If judicial review is to be more than an empty ritual, it must demand something better than the explanation offered for the action taken in this case,” Roberts wrote.

The data obtained from the 2020 census is used for the allocation of congressional seats and the distribution of billions of federal dollars to states and localities over the next decade.

The Trump administration claimed the citizenship question on the census questionnaire is necessary to better comply with federal voting rights law. Critics argued it is an attempt to intimidate noncitizens and Hispanic households and will lead to a decline in response rates and underrepresentation of minorities.

Following the 2010 census, Republicans drew favorable maps in enough states that the party’s hold on a House majority was all but guaranteed until 2018 — and to cement their legislative majorities in a host of swing states. Because the GOP’s voters are whiter and more spread geographically, while non-white voters tend to back Democrats and are more concentrated in urban areas, a census that counts fewer non-white people could help Republicans draw favorable maps that would last another decade.

President Donald Trump tweeted Thursday he has asked lawyers whether it’s possible to delay the census.

“Seems totally ridiculous that our government, and indeed Country, cannot ask a basic question of Citizenship in a very expensive, detailed and important Census, in this case for 2020. I have asked the lawyers if they can delay the Census, no matter how long, until the … United States Supreme Court is given additional information from which it can make a final and decisive decision on this very critical matter,” he wrote in a pair of tweets.

“Can anyone really believe that as a great Country, we are not able the ask whether or not someone is a Citizen,” Trump wrote. “Only in America!”

Justice Department spokesperson Kelly Laco told CNN, “We are disappointed by the Supreme Court’s decision today. The Department of Justice will continue to defend this Administration’s lawful exercises of executive power.”

Trump has said the census would be “meaningless” without the citizenship question.

The President tweeted in April, “Can you believe that the Radical Left Democrats want to do our new and very important Census Report without the all important Citizenship Question. Report would be meaningless and a waste of the $Billions (ridiculous) that it costs to put together!”

The administration has also asserted executive privilege over materials related to the citizenship question, spurring a fight with House Democrats.

“The sole stated reason — seems to have been contrived. We are presented, in other words, with an explanation for agency action that is incongruent with what the record reveals about the agency’s priorities and decision-making process.”

Justice Stephen Breyer, joined in part by Justices Sonia Sotomayor, Ruth Bader Ginsburg and Elena Kagan, agreed with Roberts that the Commerce Department provided a “pretextual reason” for adding the question. But they would have gone further. They wrote separately to say the decision violated a federal law, the Administrative Procedure Act that regulates how agencies establish their rules.

Breyer wrote that asking the question “risked undermining public confidence in the integrity of our democratic system itself.”

New York Attorney General Letitia James, who challenged the administration, said in a statement Thursday “This one question could have caused a substantial undercount, particularly of noncitizens and Latinos.”

“Thanks to the Court, the census will remain a tool for delivering on our government’s promise of fairness and equity,” James said.

Related: Bank of America will no longer do business with companies that run detention centers

Justice Clarence Thomas, joined in part by Justices Neil Gorsuch and Brett Kavanaugh, said he would have allowed the question on the census.

“For the first time ever, the Court invalidates an agency action solely because it questions the sincerity of the agency’s otherwise adequate rationale,” Thomas wrote.

“Echoing the din of suspicion and distrust that seems to typify modern discourse, the Court declares the Secretary’s memorandum ‘pretextual’ because, ‘viewing the evidence as a whole,’ his explanation that including a citizenship question on the census would help enforce the Voting Rights Act … ‘seems to have been contrived.'”

Every lower court asked to consider the issue has blocked the administration from adding the question, ruling that Commerce Secretary Wilbur Ross exceeded his authority under federal law or the Constitution by doing so.

Steve Vladeck, CNN Supreme Court analyst and professor at the University of Texas School of Law, said there may be a big difference between the formal ruling and its practical impact given the timing.

“Formally, it’s a very narrow decision that likely won’t have that big of a direct impact on these kinds of cases going forward, and it doesn’t even preclude the Trump administration from asking about citizenship on the census if they do it in a way that is less transparently pretextual,” he said. “But practically, it’s going to be very difficult for the government to run the traps in time — and the most likely outcome is that the 2020 census will go out with no citizenship question.”

After arguments before the high court, opponents of the question informed the court they had obtained “new evidence” the decision was politically motivated. They say the intention was to intimidate minority households from responding in order to reduce Democratic Party representation.

Late last month, the ACLU obtained a hard drive with about 75,000 documents, including a 2015 study from a Republican redistricting expert, Dr. Thomas Hofeller, who they say played a significant role in the decision to add the question.

Hofeller, who has since died, wrote that using “citizen voting age” population as the redistricting population base would be “advantageous to Republicans and Non-Hispanic Whites.”

Opponents of the citizen question allege Hofeller ghostwrote part of a Justice Department draft letter requesting the Commerce Department, which oversees the census, add the question. They say the evidence reveals that Ross adviser A. Mark Neuman and senior Justice official John Gore “falsely testified” about the genesis of the request to add the question.

DOJ claimed in a letter to Furman that Hofeller’s work did not play “any role whatsoever” in the department’s request to add the question.