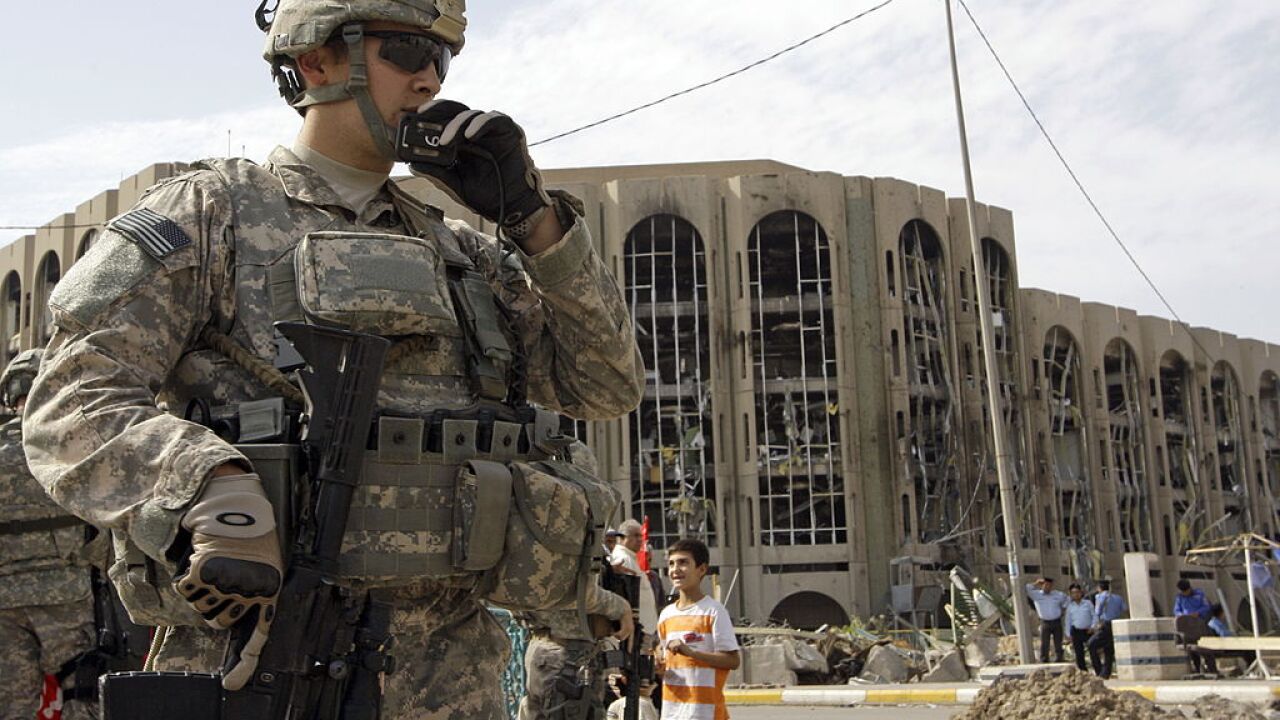 A US soldier surveys the area of the destroyed Justice Ministry (behind) in central Baghdad on October 30, 2009, five days following a suicide bus bombing outside. US forces expect insurgents to plan more spectacular attacks in the run-up to January elections and are braced for an upswing in violence, a senior US Major General John D. Johnson warned in an interview with AFP. AFP PHOTO / ALI AL-SAADI (Photo credit should read ALI AL-SAADI/AFP/Getty Images)

A Canadian man was sentenced to 26 years in prison for conspiring to kill five US soldiers in Iraq in a 2009 suicide attack.

Faruq Khalil Muhammad ‘Isa was a resident of Edmonton, Canada, and a member of a multinational network that helped those hoping to carry out suicide bombings travel to Iraq, according to the Department of Justice.

On April 10, 2009, a convoy of five vehicles carrying US soldiers was outside the Forward Operating Base Marez in Iraq when a dump truck, under fire by Iraqi guards, breached the checkpoint, passed four vehicles and detonated next to the fifth.

The blast left a 60-foot-deep crater about 50 yards outside of the base’s entrance.

The Department of Justice said that while living in Canada, ‘Isa communicated with members of the terrorist network, some of whom carried out the attack, to facilitate their travel from Syria to Iraq and offer “words of encouragement and religious guidance.”

In recorded phone and electronic communications with numerous co-conspirators, including would-be suicide bombers and facilitators based in Iraq, ‘Isa often referred to carrying out terrorist attacks as getting “married,” as in marriage to 70 virgins or “farming,” because they “plant metal and harvest metal and flesh,” according to the Justice Department’s criminal complaint.

Court documents show ‘Isa regularly checking in with the foreign fighters to find out the status of their “marriages” — and he even discussed his terrorist activities with his own family based in Iraq. He urged his sister to “learn about weapons and go attack the police and Americans,” according to court documents.

He was first arrested in 2011 and pleaded guilty on March 6, 2018 to conspiracy to commit murder of United States Nationals as part of a plea agreement.

After his release from prison, ‘Isa will be sent to Canada under lifetime supervised release, the DOJ said.

“Today’s sentence brings some measure of earthly justice to an individual involved in the deaths of five service members, but it cannot begin to compensate for the evil he contributed to or alleviate the pain of those families whose lives he changed forever,” Assistant Attorney General Demers said in a statement after the sentencing.