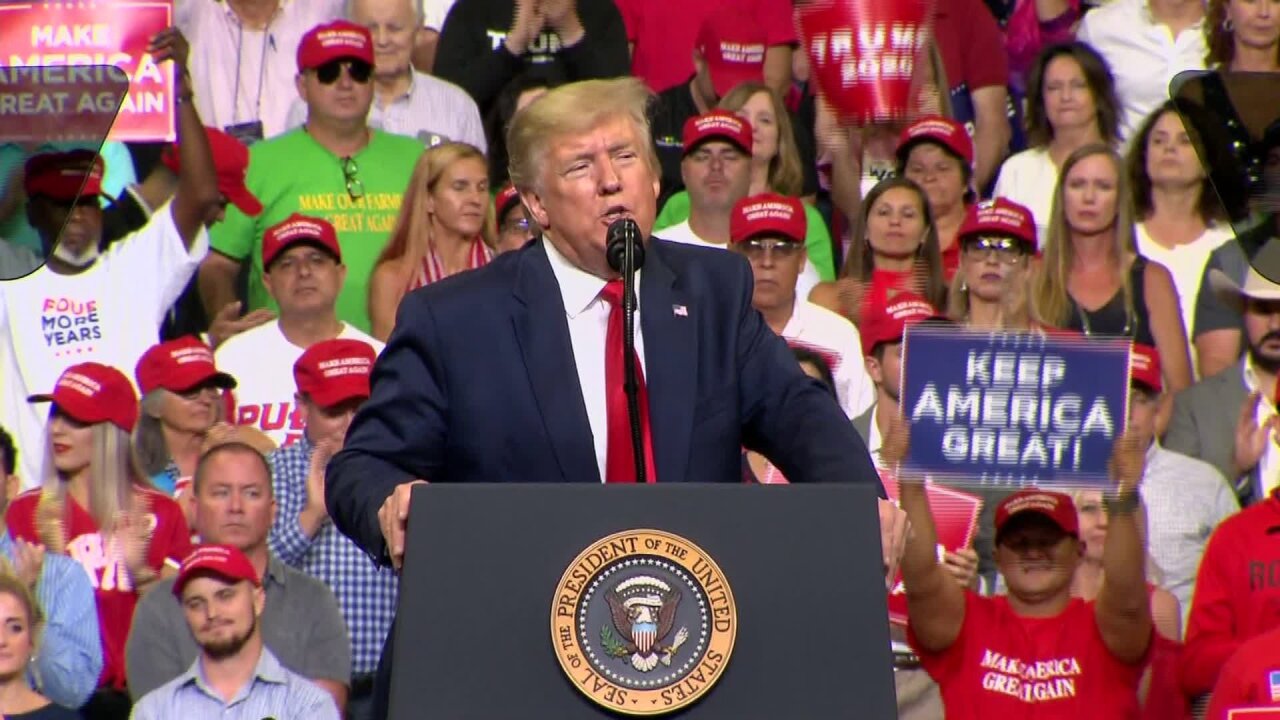 He railed against illegal immigration and promised mass deportations. He pledged to negotiate a winning trade deal with China, or walk away altogether. He painted Democrats as hateful socialists who want to “destroy” the country. And he continued to sell himself as an outsider who is fighting “the swamp.”

He even went after Hillary Clinton, his 2016 presidential opponent, prompting “lock her up” chants from the Orlando crowd.

The President’s political advisers had hoped that Trump would use the 60th rally of his presidency — branded as a 2020 campaign kickoff — to tout his accomplishments and deliver a pitch for four more years tailored to a “promises kept” mantra. Trump did tick off a list of accomplishments, but his speech mostly centered on a string of personal grievances, fear-mongering about Democrats and attacks on his political opponents, past and present.

“Our radical Democrat opponents are driven by hatred, prejudice and rage. They want to destroy you and they want to destroy our country as we know it. Not acceptable. It’s not going to happen,” Trump warned his supporters, without evidence.

Over the last five months, Trump has watched nearly two dozen Democrats launch their presidential campaigns, swinging the media spotlight — with varying degrees of success — away from him and onto his would-be successors.

Trump, who filed for reelection the day of his inauguration, was left commentating from the sidelines. He tipped his hat to Sen. Kamala Harris for the crowd size and “enthusiasm” of her campaign launch. He mocked Sen. Amy Klobuchar for looking like a “Snowman(woman)!” when she announced her run outdoors during a snowstorm. And he panned former Rep. Beto O’Rourke’s hand movements.

All the while, he groused to aides and advisers that cable TV networks had largely stopped airing his campaign rallies live as they did in 2016, two sources familiar with his comments said, to the point that aides contemplated ways to garner media interest in Trump’s rallies.

His formal campaign launch on Tuesday at a packed 20,000-person arena in battleground Florida was aimed at doing just that, but his focus on the past and a series of personal grievances raised questions about his ability to reclaim the narrative of the 2020 campaign.

Campaign officials hoped the spectacle would satisfy Trump’s thirst for the spotlight and saw it as a way to “reset” the campaign’s efforts, one campaign source said, signaling to grassroots supporters and donors alike the start of the campaign season.

Ahead of the rally, Trump and Vice President Mike Pence hosted a fundraising reception for high-dollar donors, some of whom flew in from around the country for the kickoff event, according to sources familiar with the event. And this week the Republican National Committee and the Trump campaign are also holding a national week of training to train volunteers and neighborhood organizers.

Four years ago, Trump dove into presidential politics with no political experience to speak of and a slapdash campaign operation at his back. This time, he “announced” his reelection run at the 60th campaign rally of his presidency — and with a professionalized political operation already up and running. His campaign war chest totaled $40 million at the end of March and about 80 staffers are on board, including a slate of regional political directors and state directors in battleground states building up the campaign’s field operations.

Trump, though, remains as controversial as ever, and despite a strong economy, faces an uphill battle: More than half the country disapproves of his job as President and he trails every presidential candidate in the top tier of the Democratic field in head-to-head matchups, according to recent polls.

And while special counsel Robert Mueller’s investigation has concluded, Mueller’s refusal to render a judgment on whether Trump obstructed justice has only amplified talk of impeaching him and prompted House Democrats to double down on their investigations of Trump’s administration.

The warning signs most recently came from within Trump’s own operation when polling conducted by his campaign showed the President trailing in battleground states that were crucial to his path to victory in 2016. After Trump denied the poll numbers existed, the specific numbers leaked. The Trump campaign ultimately confirmed the legitimacy of the figures and moved to fire three campaign pollsters over the leaks.

That move is already causing concerns among some Trump campaign advisers, who worry that Trump is not heeding warning signs about his reelection prospects and that firing the pollsters will be counterproductive.

“You’re getting rid of the brains of your operation,” one source close to the Trump campaign said of the decision to cut off ties with the three pollsters.

Betting on his strengths

Ahead of Tuesday’s rally, Trump was already turning the focus to the signature red meat issues that dominate his campaign rhetoric: illegal immigration, the news media and the impeachment fight he may face.

Just as in 2016, Trump’s rallies will continue to be fertile ground for the campaign’s data-mining operations, deliver useful information about voters to the shared Trump campaign-Republican National Committee data files. But this time, Trump campaign operatives will aim to pull even more granular data out of the rallies and devote more energy to turning rally attendees into volunteers — something Trump campaign officials identified as a shortcoming of 2016.

This time, aides will have to contend with a candidate whose time is stretched between his duties as president and a reelection campaign. Already, that tension led the campaign to abandon plans to launch Trump’s reelection campaign by holding a cluster of rallies timed around the fourth anniversary of Trump’s campaign announcement in 2015.

But with the date falling during a month with two trips abroad, campaign aides eventually abandoned the idea, two campaign sources said.

Instead, campaign aides worked toward one rally in the critical battleground state of Florida where the President was joined by first lady Melania Trump, his children, Pence and several of his top campaign advisers. The campaign also expanded the campaign’s preprogram, adding food trucks and a performance by a live band to entertain supporters waiting in line outside the rally.

The kickoff rally followed months of work by the Trump campaign to get its operations up and running well ahead of the general election, reaping the benefits of incumbency while a crowded field of Democrats squabble for the nomination.

The President’s top political advisers have already been hitting key battleground states to connect with state party operations and get their field operations in motion. And with warning signs in the industrial Midwest states so crucial to Trump’s 2016 win, the Trump campaign has also begun to look toward other states where it sees opportunities, such as Minnesota, Nevada and even blue states such as New Mexico and Oregon.