Tiger Woods forced to ‘fight’ in US Open at Pebble Beach 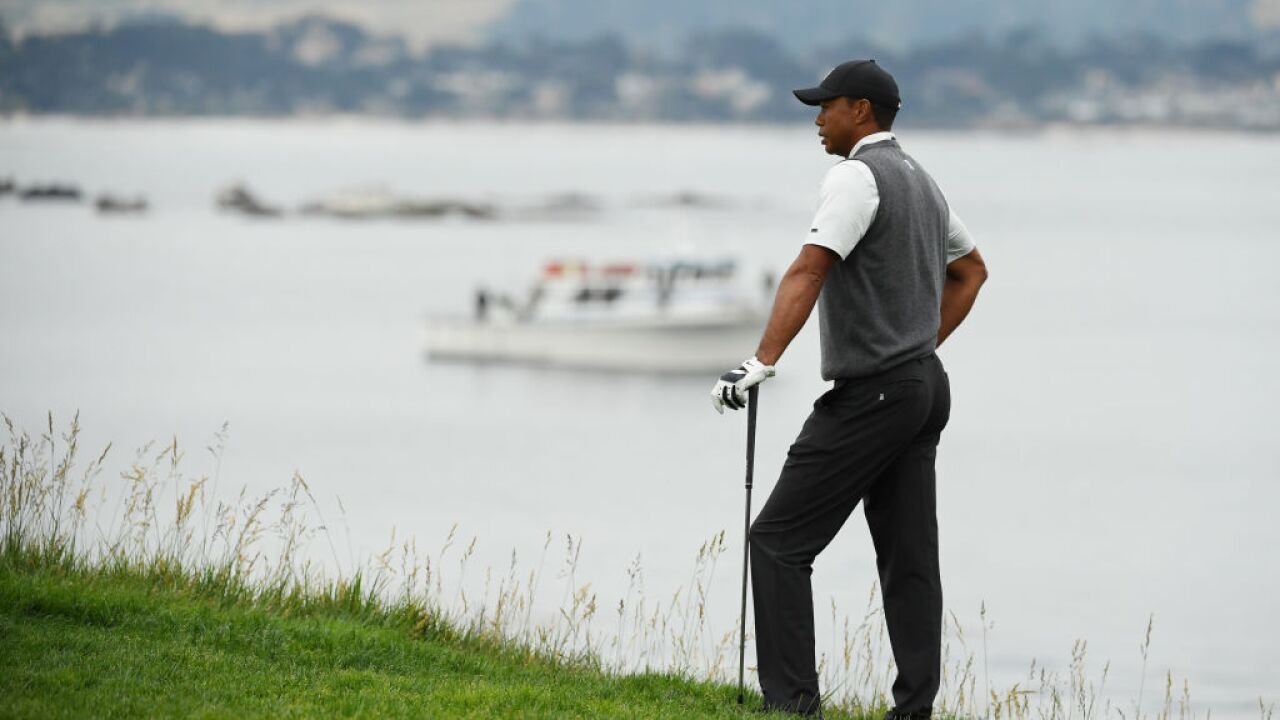 PEBBLE BEACH, CALIFORNIA – JUNE 13: Tiger Woods of the United States reacts to a shot during the first round of the 2019 U.S. Open at Pebble Beach Golf Links on June 13, 2019 in Pebble Beach, California. (Photo by Ross Kinnaird/Getty Images)

He has dazzled at Pebble Beach in the past, but Tiger Woods had to “grind” and “fight” to stay in contention at the 119th US Open Thursday.

The peerless Woods won by a record 15 shots when the US Open was held at the picturesque Monterey venue in 2000, but the 43-year-old 2019 version ground out a one-under 70 to sit five off the lead of England’s Justin Rose.

“It’s typical Pebble Beach where the first seven holes you can get it going, and then after that you’re kind of fighting and kind of hanging on,” Woods told reporters afterwards.

“I had it going early and had to fight off through the middle part of the round and hung in there with pars. It’s just fighting it out and grinding it out.”

Woods’ Masters victory in April for a 15th major and first in 11 years renewed talk of his quest to pass Jack Nicklaus’ record of 18 majors but a missed cut at the PGA Championship last month tempered expectations.

After four back operations, including spinal fusion surgery, Woods has to manage his body carefully, but he said the problem was his iron play on a short, tight course with small greens that demand strategy and accuracy above brute power.

“I tried to miss the ball in the correct spots, and a couple of times where I had wedges in my hand I was just dumping, center of the green, get my 30-, 40-footer and move on. I took my medicine when I was in a bad spot and just kind of grind it out.”

Rose, playing alongside Woods, compiled a stunning 65 as he chases a second major title to add to his 2013 US Open triumph at Merion, Pennsylvania.

“This is just a very small step towards the outcome,” said the 38-year-old. “You don’t feel like that buzz that you would on a Sunday, but you can’t help but look around over your shoulder, and [think] dam, this is Pebble Beach. Shot 65 and you’re in the US Open. It’s a cool moment. Whatever transpires the rest of the week, it was a cool moment.”

Defending champion Brooks Koepka was another who had to embrace his stoic side on the shores of Carmel Bay.

The 29-year-old, bidding to become only the second player after Willie Anderson (1903-1905) to win three straight US Opens, carded a two-under 69 after escaping from a number of tricky spots including having to play his second off a concrete cart path on the 18th.

“I try to find some positive and try to spin it, even when something negative happens,” said world No.1 Koepka, who has won four of his last eight majors.

One shot behind Rose was the quartet of Rickie Fowler, Xander Schauffele, Louis Oosthuizen and Aaron Wise.

“It was very stress free. It felt like the worst I could have shot,” said world No.11 Fowler, who is still chasing his first major title.