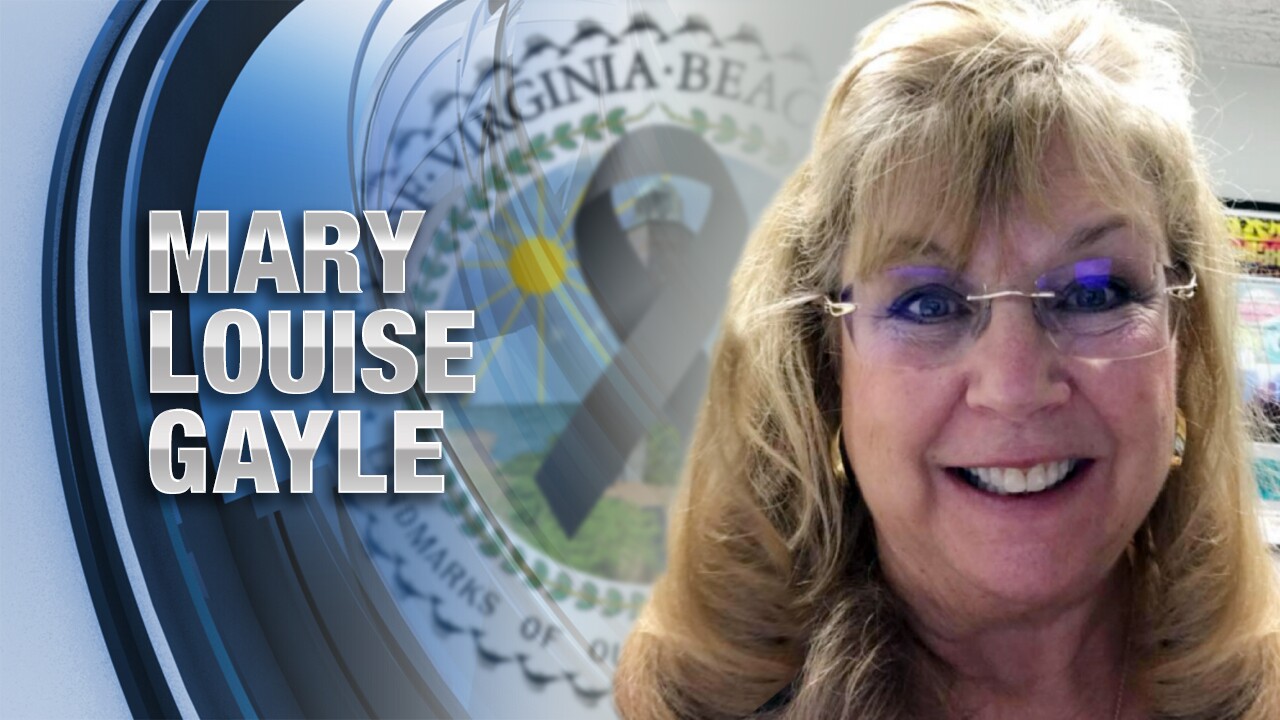 Gayle had been with the department for 24 years.

Tidewater Community College said she graduated from TCC with an Associate of Science in Science in 1976 before going on to earn a bachelor’s from St. Leo University and a master’s in public administration from Troy University.

In addition to her grandchildren, TCC said Gayle is survived by her son, Matthew Gayle, and spouse Carrie Gordon; daughter Sarah Leonard and her spouse, Jeff Leonard and four siblings, Barbara, Bobby, Cathy and Tricia.

On Wednesday, the City of Virginia Beach issued a statement from Gayle’s children, Matthew Gayle and Sarah Leonard, in lieu of further inquiries at this time:

Her nurturing spirit and protective nature extended beyond her own children. She loved people and they loved her back. It’s no surprise, as our Mom consistently sacrificed her own needs and desires to help others. She was a strong person with even stronger opinions. About everything. You might say she nagged us. It took many years, but we finally realized she was usually right, and we learned to lean on her wisdom.

The pain we have felt these last few days would have been much harder to bear if we had not been surrounded by the love and care of so many of Mom’s colleagues and friends, at least a dozen of whom introduced themselves to us by saying, “I’m your mom’s best friend.”  We get it. Somehow, she always found time for others while holding down a full-time job, going to school, raising two children on her own, volunteering at her church, and doing all sorts of DIY projects around her home. Mom would do anything she could to help others but was stubborn about being completely self-reliant. Even in her sixties, she refused to allow us to hire someone to replace the deck in her back yard. Instead, she learned to use a power saw and a nail gun so she and Matthew could do it themselves.

Our Mom was a single mother with an Associate’s degree when she began her 24-year career at the City of Virginia Beach as a Legal Secretary in the City Attorney’s Office. Through hard work and perseverance, she earned Bachelor’s and Master’s degrees and completed a rigorous certification process to become a Right of Way Agent. She thrived in her role with the City, through which she facilitated the purchase of land for development by the City. She worked hard to get where she did but despite her many accomplishments she remained humble and reserved her pride for her children and grandchildren.

Her grandchildren, Jeffrey and Genevieve, were the “lights of her life” and she would report to friends that she was “in Grammy heaven” whenever she was able to spend time with them. Just two weeks prior to her death, she spent a week caring for them while Sarah and her husband traveled for business. Typical for her, she took the children to numerous activities and events while also finding time to “clean” Sarah’s (already clean) house, stock the refrigerator, replant the garden, outfit the kids with new wardrobes, and iron all of Sarah’s husband’s dress shirts.

When our lives carried us away from Virginia Beach, Mom waged a decade-long campaign to get us to move home. She sent job postings and listings of homes for sale in the neighborhood that were conveniently right up the street or around the block from her house.

Mary Lou Gayle was a kind, warm, funny, giving, and loving woman who made this world a far better place just by being here. Our hearts go out to the other families who lost loved ones on Friday and we remain beyond grateful for the support and kindness we have received.”

The family will receive friends Thursday evening from 6 p.m. to 8 p.m. at H.D. Oliver Funeral Apts.

A Catholic Mass will be held at 11 a.m. at St. John the Apostle Catholic Church, 1968 Sandbridge Road in Virginia Beach. Her burial will follow the funeral service and will be held at Princess Anne Memorial Park.

To share your memories of Mary Louise Gayle, email us at takingaction@wtkr.com.