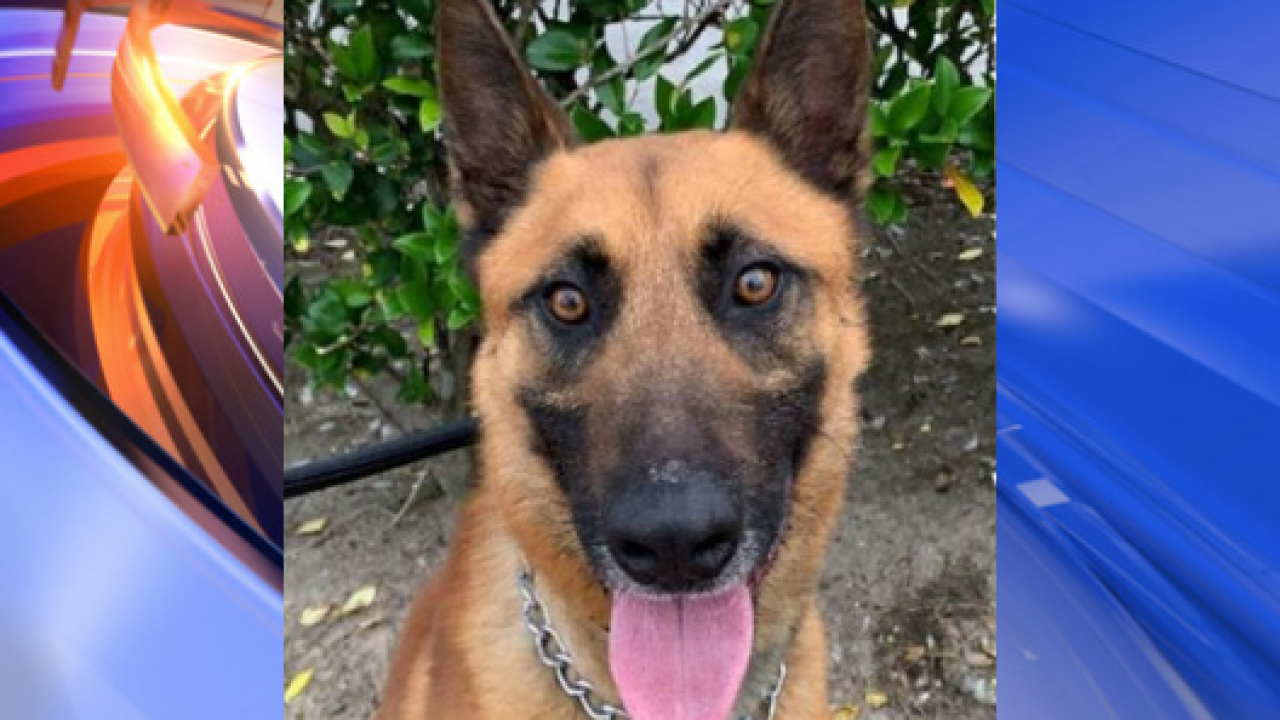 Rambo, a retired mine detection dog, is seen in this undated photo.

The four-year-old Belgian Malinoises are retired mine detection dogs who have spent much of their lives working to clear explosives in Syria. Now they’re back in the United States, working to transition to civilian life in the hopes of finding new homes.

The work of mine detection dogs like Rhino, Rambo and Der has played “a critical role” in helping the recovery of areas liberated from ISIS, Jerry Guilbert, the chief of programs for the Office of Weapons Removal and Abatement at the State Department said last week.

“These dogs have been absolutely critical to facilitating the work of our implementing partners who are doing this clearance on the ground,” he said. “And it’s because of the work that these dogs have done (that) the United States in both Iraq and Syria has been able to clear more than 80,000 explosive hazards … from nearly a thousand critical infrastructure sites in areas that have been liberated from ISIS control.”

Rhino, a retired mine detection dog, works in Syria in this undated photo.

According to Guilbert, in places where ISIS has been driven out, the terrorist organization “booby trapped anything that would have been of use to people who were going to be returning to the areas it occupied.”

“So before you can provide that critical stabilization and humanitarian assistance, you have to clear those explosive hazards away,” Guilbert explained.

Many of the explosive hazards have triggers that “can be very, very hard to detect through conventional means,” he said, adding that “trying to decipher these triggers in battlefield conditions, in heaps of rubble, is almost impossible.”

That’s where the dogs come in. They are able to sniff out explosives and can even detect large explosives from outside of buildings.

“Before we send humans in to clear a building or check that critical infrastructure site for IED contamination, one of things that we’ll do is bring these specially-trained mine detecting dogs up to sniff the perimeter, determine if there are explosives in that building and based on where the dogs may be indicating, find out where in the building perhaps do we think those explosive hazards are,” Guilbert said.

Der, a retired mine detection dog, works in Syria in this undated photo.

Many of the mine detecting dogs “will keep working until they’re just not capable of working anymore,” Guilbert said. They are often adopted by their handlers in the countries where they were serving, but sometimes — like in the case of these three dogs — they are repatriated to the United States.

Rhino, Rambo and Der are now living in Houston, working to acclimate to civilian life with the help of Mission K9 Rescue, an organization dedicated to retiring and retired working dogs.

The dogs each have individual yards, are fed twice a day and “have all the toys they could want,” Louisa Kastner, the vice president of the organization, said last week.

The rehabilitation process varies for each dog, Kastner explained, but the organization tries to surround the dogs with “constant positive interactions” and “do the best we can to make them feel safe.” Some dogs take months to transition to their new lives and get adopted, while others have lived out their lives with Mission K9 Rescue.

“They are all doing amazingly well,” Kastner said Friday in an email to CNN. “Unfortunately with the rehab process nothing is quick, we let them go at their own pace, and never try to rush or push them in their rehabilitation. They let us know when they are ready.”

Asked whether she thought it would be difficult to find homes for the three dogs, Kastner said she didn’t think it would be hard at all.

“I think it’s just a matter of finding the right home,” she said.