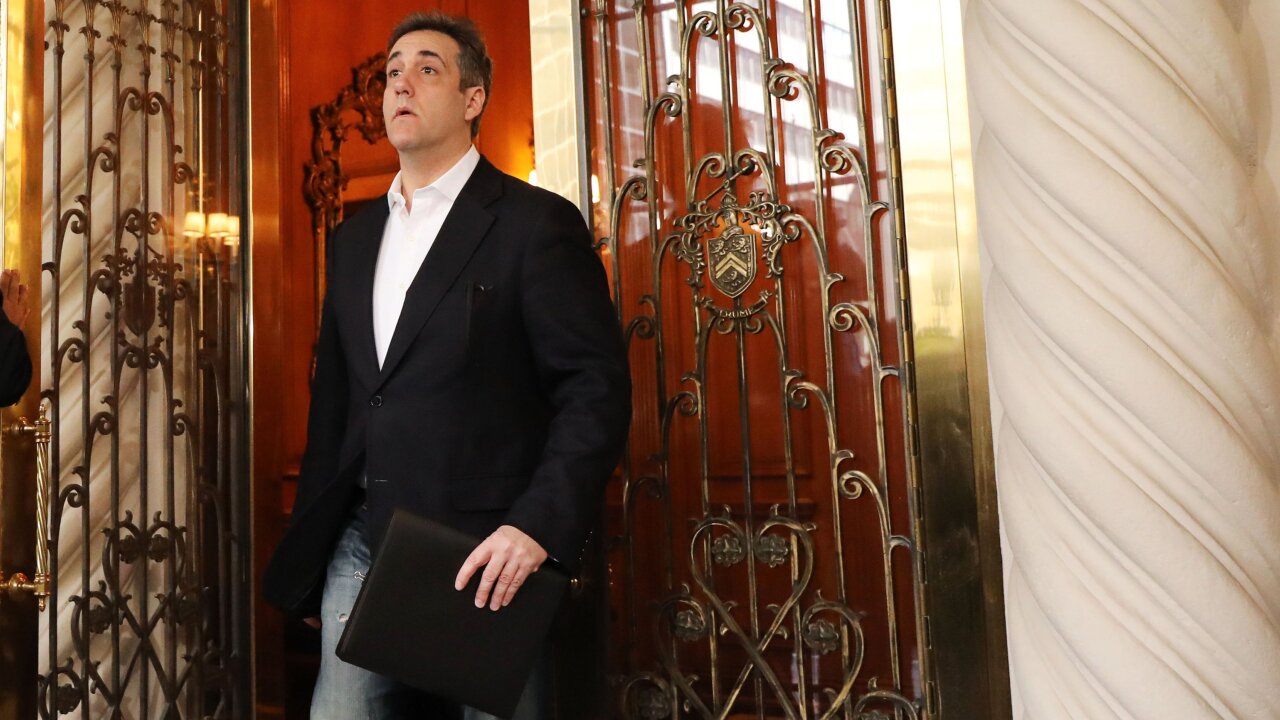 Michael Cohen, the former personal attorney to President Donald Trump, prepares to speak to the media before departing his Manhattan apartment for prison on May 06, 2019 in New York City. Special counsel Robert Mueller’s search warrants in his investigation of Michael Cohen will be made public with redactions on Wednesday, a federal judge ordered

Mueller was appointed in 2017 to investigate Russian interference in US politics, and the new documents show how Cohen gave Mueller plenty of reasons to aggressively investigate him. That’s because Cohen initiated many of his contacts with foreign companies immediately after the 2016 presidential election, and started taking hundreds of thousands of dollars from foreign sources.

Michael Cohen, the former personal attorney to President Donald Trump, prepares to speak to the media before departing his Manhattan apartment for prison on May 06, 2019 in New York City. Special counsel Robert Mueller’s search warrants in his investigation of Michael Cohen will be made public with redactions on Wednesday, a federal judge ordered

The special counsel obtained five search warrants before handing the Cohen investigation over to federal prosecutors in Manhattan. Those warrants were unsealed Wednesday by a federal court in Washington, DC, after CNN and other media outlets sued to make the records public.

The details of Mueller’s early work were disclosed as Trump and Attorney General William Barr set their sights on the origins of the Russia investigation. Barr has questioned the legitimacy of how the probe started, while Trump has called it an “illegal” and even “treasonous” endeavor.

But the documents describe how investigators were learning of new and concerning actions, tying Trump’s closest associates to powerful Russian interests, even after Trump was elected.

Mueller told a federal judge in 2017 that investigators believed Cohen’s contact with foreign companies may have included an American investment firm linked to a well-connected Russian oligarch and a Kazakhstan-based bank that was entangled in a massive fraud scheme.

At the same time, Cohen maintained close relationships with key members of the Trump administration, including the President. In the search warrant application, prosecutors cited news reports about Cohen’s efforts with a Russian-American businessman to craft a Russia-friendly “peace plan” for the Ukraine conflict and deliver it to the White House.

The Mueller investigation did not establish that there was any quid-pro-quo regarding Russian sanctions. But the new documents show how Mueller’s team had tranches of banking evidence linking Cohen to secret Russian payments, and prompting them to want to look into his emails. The documents also revealed for the first time that Mueller received approval to access Cohen’s emails at his Trump Organization address.

A federal judge agreed that Mueller had probable cause to search the online data, paving the way for Mueller to intensify the investigation that resulted in Cohen’s current incarceration. Cohen pleaded to guilty nine other crimes, including tax evasion, campaign finance violations, and lying to Congress. He reported to federal prison in New York earlier this month.

“The allegations and suspicions contained in the warrant supporting papers regarding alleged Michael Cohen ‘crimes’ were just that — and most are false and unfair,” said Lanny Davis, Cohen’s attorney, in a statement. “For example, Mr. Cohen took no illegal or improper payments from Russians or anyone – and no such charges were ever made against him.”

The search warrants show that Mueller moved on Cohen very quickly after taking over the investigation. His team was armed with significant financial information from his bank and also relied on reporting in the press about Cohen’s activities. They used that information to secure a judge’s permission to follow the money from Russian sources to Trump’s personal lawyers.

Mueller ultimately revealed in his search warrants that federal agents gathered financial information related to Cohen and his work for Trump and for foreign-linked entities from at least three banks.

In a search warrant application from July 2017, prosecutors outlined how Cohen started communicating with a Russian-connected company on Election Day. Over the next year, there were more than 1,000 calls and text messages between Cohen and the CEO of that company, Columbus Nova.

In the filing, Mueller’s team made it clear that Cohen began contacting the company immediately after the election: “Telephone records show no such text messages or telephone calls between COHEN’s cellular telephone and the CEO of Columbus Nova prior to November 8, 2016.”

Columbus Nova is an American company linked to Viktor Vekselberg, a prominent Russian oligarch. In the documents, prosecutors noted his “various connections to Russian President Vladimir Putin.” Columbus Nova has always denied being a tool of the Kremlin, and Vekselberg was questioned by the FBI in early 2018 after being stopped at a New York-area airport.

“They were working together so of course texted and called each other,” the company said in a statement on Wednesday. “This was all known and investigated, and wasn’t even deemed worthy of being included in the special counsel’s report.”

Cohen’s ties to many of these foreign companies are already well-documented. But the search warrants provide some new details about his transactions, including a contract he negotiated with a Kazakhstan-based bank to pay him a $150,000 monthly consulting fee. Cohen’s links to the bank spilled into public view during his dramatic daylong public hearing on Capitol Hill.

Cohen took money from companies during the early stages of the Trump administration, ostensibly to help businesses navigate the Trump era. He also used the account, which was for Essential Consultants LLC, to facilitate hush money payments to women who accused Trump of affairs before he was a candidate for president. Trump denies those allegations.

The basic reasoning for Mueller’s searches of Cohen was previously referenced in related warrants unsealed in New York federal court, which prosecutors used after they received the Cohen case from Mueller. In both sets of court records, chunks of the documents are still redacted, apparently including sections about the hush-money scheme to pay off the two women who have accused Trump of affairs.

An investigation related to the contributions appears to still be ongoing, and the details will remain under seal and will remain so for at least another two months, according to judges’ orders in both courts. The continued confidentiality suggests that federal prosecutors continue to investigate the Trump Organization.

Cohen was not charged with acting as a foreign agent.

Looking for a quid-pro-quo

Parts of the first search warrant mention how Cohen was involved in an effort to broker a peace plan for Ukraine. Citing heavily from The New York Times, prosecutors laid out how Cohen met with a controversial Ukrainian lawmaker while taking big money from Columbus Nova.

The insinuation was that somehow the payments could be connected to the proposal. In July 2017, Mueller said he was still investigating whether the payments were part of a quid-pro-quo.

The White House never adopted or promoted any proposals that resemble Cohen’s plan for Ukraine. In some ways, the Trump administration has been more aggressive in Ukraine policy than the Obama administration. Trump regularly echoes Kremlin talking points on Ukraine, but his administration has sent lethal weapons to Kiev for its fight against Russian-backed militias.

Mueller’s inclusion of the peace plan effort by Cohen in the early search warrants is intriguing because it is one of the remaining loose ends. The special counsel never answered key questions about Cohen’s peace plan — or even mentioned it at all — in his final report.

The redacted version of the Mueller report only describes a separate effort around a Ukraine peace plan with similar pro-Russian goals to the one described in the Cohen documents.

That other effort was the one that Paul Manafort, Trump’s former campaign chairman, and his Russian associate Konstantin Kilimnik discussed multiple times during the 2016 and later, Mueller said. In some of those conversations, the former head of Trump’s campaign talked with Kilimnik about pursuing Trump’s approval on the foreign policy.

Yet Mueller appears to not have been able to get to the bottom of what happened with the peace plans. Manafort lied about it during his post-plea interviews with prosecutors, and some of his online communications were encrypted. And the Cohen plan was left unmentioned.