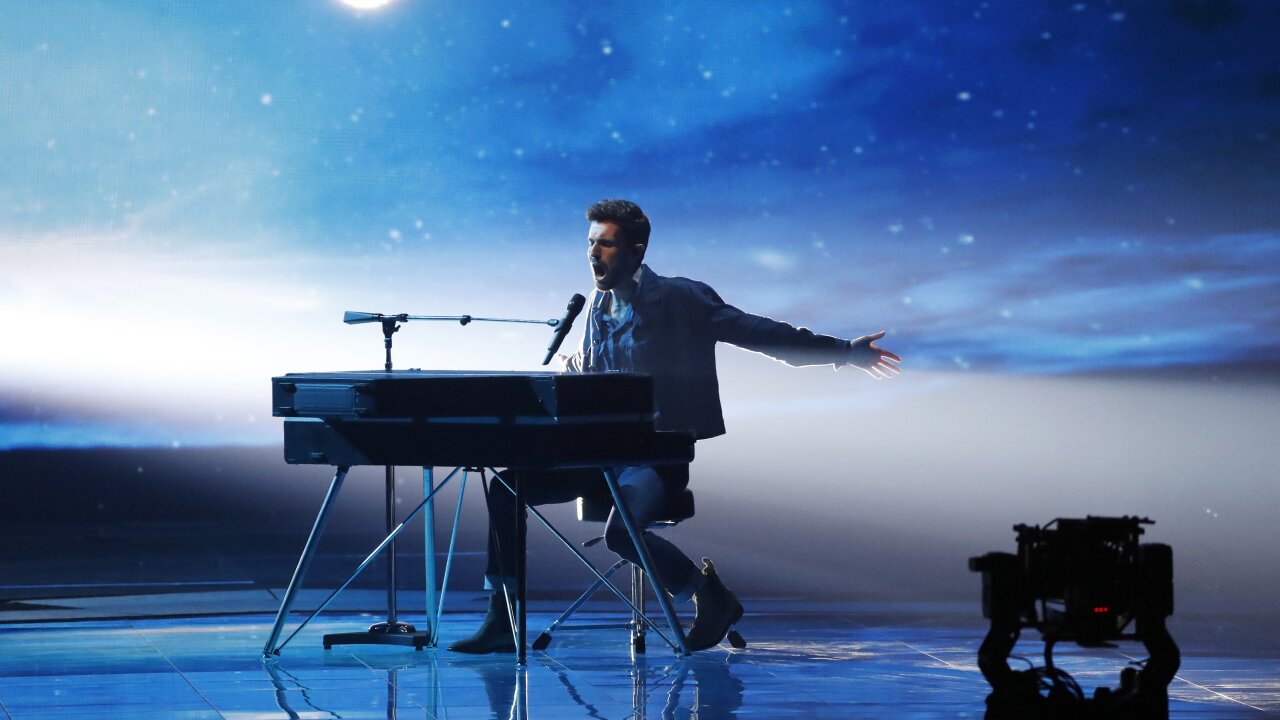 The Netherlands triumphed at a controversial Eurovision Song Contest in Tel Aviv, Israel, taking home the title in a kitsch competition that found itself dancing around an uncomfortably political spotlight.In this image, Duncan Laurence, representing the Netherlands, performs at the show.

The Netherlands triumphed at a controversial Eurovision Song Contest in Tel Aviv, Israel, taking home the title in a kitsch competition that found itself dancing around an uncomfortably political spotlight.

The Netherlands triumphed at a controversial Eurovision Song Contest in Tel Aviv, Israel, taking home the title in a kitsch competition that found itself dancing around an uncomfortably political spotlight.In this image, Duncan Laurence, representing the Netherlands, performs at the show.

Duncan Laurence was the firm favorite before the show, and the little-known Dutch singer received rapturous applause in the arena after performing his song “Arcade.” He confirmed victory after scoring strongly with both the public and national juries, beating Italy and Russia to the title.

“This is to dreaming big. This is to music first, always,” he said after being confirmed as winner — the first victor his country has had since 1975. The United Kingdom, by contrast, slumped to the bottom spot.

The contest also featured a performance from American superstar Madonna, and a crowd-pleasing segment that saw previous winners sing hit songs from the competition’s history.

But, like a handful of editions in the past, it struggled to shake off an overbearing political row. After protests in the host city and abroad leading up to the show, popular Icelandic group Hatari raised Palestinian flags during the broadcast.

Madonna had a message of her own, featuring dancers with both Palestinian and Israeli flags on their backs.

The contest will next head to the Netherlands, with the winning nation taking over hosting duties for a year. The country’s victory is its fifth in total, joining the UK, France and Luxembourg in the all-time ranks. Only Ireland and Sweden, which the Netherlands topped for the title, have won more contests.

Here’s a look at a few of the other big moments from a memorable show.

Perhaps the most eagerly-anticipated contestants of the night, Icelandic synth-bondage-metal group Hatari held true to their appeal with a shouty and strobe-ridden performance.

Two members of the group had told CNN they were keen to politicize the event, and they did so after their set by holding up Palestinian flags during the results rundown. They managed a respectable Top 10 finish, but failed to get past the more traditional Eurovision fare produced by the Netherlands, Italy, Russia and Switzerland.

If you’re wondering why Australia takes part in Eurovision, you’re not alone. But in its fifth appearance since joining as a “one-off” act to celebrate the 60th show, the country produced a showstopper.

Kate Miller-Heidke’s entry “Zero Gravity” featured an operatic-style chorus and a barnstorming key change, and it came within a whisker of winning.

Scoring well with national juries, Australia ultimately only managed to finish ninth. That result averted inevitable questions about where exactly next year’s show would be hosted, given the logistical difficulties of it taking halfway around the world.

Conchita Wurst’s win for Austria in 2014 propelled the onstage drag persona of Thomas Neuwirth to the top tier of Eurovision victors. So a reappearance on the Eurovision stage was hotly anticipated — but rather than performing that year’s winning single, Conchita sang “Heroes,” Mans Zelmerlow’s 2015 winner for Sweden.

That kicked off a segment of the show that would have thrilled hardcore Eurovision fans, as a series of previous winners came out to sing tunes from fellow title-holders. Zelmerlow performed last year’s runner-up, Cyprus’ “Fuego,” but the highlight was the return of Verka Serduchka. The Ukrainian performer became perhaps the quintessential example of Eurovision-related weirdness with their eyebrow-skyrocketing number in 2007.

The moment was rounded off by a group performance of “Hallelujah,” performed by Gali Atari, who won for host Israel in 1979.

Madonna’s set fails to impress some

Madonna followed in the footsteps of Justin Timberlake a few years prior, adding a huge American name to a uniquely European event. The pop superstar opened her show with her classic hit “Like A Prayer” before entering into her new single, “Future,” alongside Atlanta rapper Quavo.

But her set didn’t impress everyone, with some on social media questioning her vocals on a few key notes.

The star also used the opportunity to comment on the region’s political tensions. As the set ended, two dancers walked off arm in arm, with an Israeli flag on the back of one and the Palestinian flag on the other.

“You’re all winners,” she told the show’s contestants before taking to the stage. “Let’s never underestimate the power of music to bring people together.”

Despite the controversies, the night was a showpiece that would have disappointed few Eurovision fans.

Israel’s homegrown performer Kobi Marimi broke down in tears after performing his appropriately named number “Home.” It scored a wild reception from the partisan crowd, but ultimately placed just four spots from the bottom.

The UK managed to do even worse, finishing in 26th — dead last. It’s a position the country has become accustomed to in recent years, with national juries and the voting public frequently critical of its entries — only once since 2014 has Britain climbed above the 24th spot.

And national dress, skin-tight outfits and plenty of pyrotechnics all made their usual appearances, in a show many on social media commended for its overall musical quality.