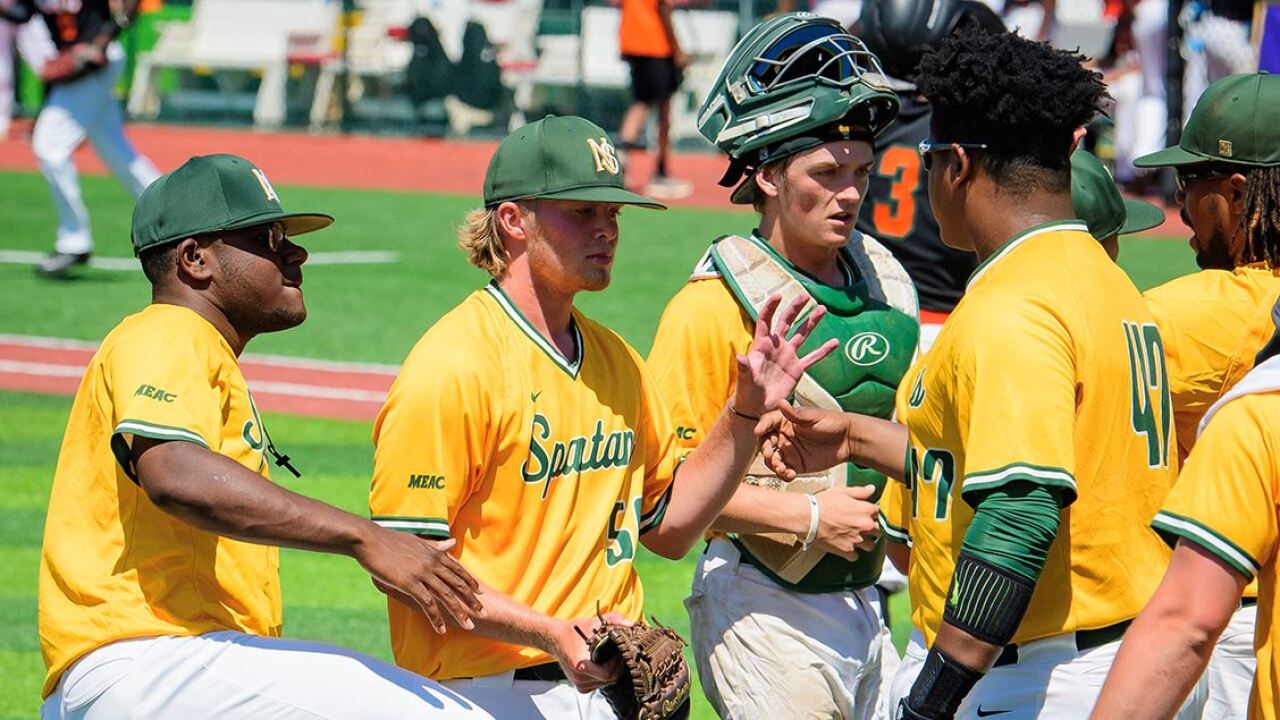 The Spartans (24-26) were one strike away from their first-ever postseason MEAC title, but eight-unanswered runs from Florida A&M across the two games ended NSU’s season and sent the Rattlers (27-32) from the consolation bracket to the championship podium.

The Spartans were tantalizingly close to their first-ever MEAC title. Alsander Womack and Caleb Ward hit back-to-back solo home runs in the bottom of the seventh to break a 2-all tie and give the Spartans a 4-2 advantage. But FAMU rallied. Kaycee Reese’s RBI single in the top of the eighth cut the NSU lead in half.

Still, the Spartans led 4-3 in the top of the ninth, and reliever Trey Hanchey retired the first two batters of the inning to put his team on the brink of the championship. Willis McDaniel worked a walk, and Seyjuan Lawrence singled. Reese then walked to load the bases. Down to their last strike, FAMU took the lead on Brett Maxwell’s two-run single on a 3-2 count.

Rattler relief pitcher Jeremiah McCollum retired the Spartans in order in the ninth to finish off FAMU’s come-from-behind win.

The Spartans struck first in the bottom of the third inning on Ward’s two-out RBI single. The Rattlers took the lead with two runs in the fourth on Tucker Rayburn’s RBI single and Lawrence’s run-scoring groundout.

But Ward again provided a clutch two-out hit, singling in Mikey Delgado in the bottom of the fifth to tie the game at 2.

It became a battle of bullpens at that point. NSU got a huge lift from sophomore righty Seth Hockett. After Spartan starter Ridge Walker pitched effectively into the fifth frame, Hockett came in and struck out six over three innings. He allowed just a single hit and one run.

The Spartans got to the FAMU bullpen in the seventh. Womack lined his third homer of the year off Rattler reliever Jamie Grant over the wall near the left-field corner to give NSU the lead. On the first pitch of the following at-bat, Ward hit a hanging off-speed pitch well out to left, his second homer of the tournament, to stretch the lead to 4-2.

Ward went 3-for-3 with three RBIs.

McCollum earned the win in relief for the Rattlers, working the final two innings without allowing a run. Hanchey (3-1) took the loss, giving up two runs in 1.1 innings of work.

With all the momentum in the world, the Rattlers struck for six runs in the top of the first inning in the winner-take-all final game. FAMU sent 10 batters to the plate in the frame and led 5-0 before the first out was recorded.

NSU starter Kevin Alicea gave up six hits in the inning, and the Spartans committed three costly errors, which led to two unearned runs. Alicea left the game without logging an out and was replaced by freshman Justin Walton.

Walton recorded two quick outs before a throwing error on a pickoff attempt plated FAMU’s sixth run of the inning. After the error, Walton retired Robert Robinson to escape the inning.

The Spartans manufactured a two-out run in the bottom of the inning. Ward singled into left-center for his fourth hit of the day and moved up 90 feet on a walk to Stephen Baughan. Korey Singh then singled to drive home Ward – one of two hits in the game for Singh.

FAMU had an answer with an unearned run in the top of the second, but Walton fired perfect innings in both the third and fourth – striking out two in the fourth.

Tucker Rayburn led off the visitor’s half of the fifth with a triple and scored on a groundout. That represented the final run scored in the game as Walton and FAMU starter Kyle Coleman continued to duel.

Coleman (6-5) went the distance for the Rattlers – allowing just one run while scattering six hits and striking out nine. Walton recorded all 27 outs for the Spartans and was tagged for two runs, one unearned, on five hits with five strikeouts.

Robinson and Willis McDaniel led the way for FAMU in game two with three hits apiece. McDaniel drove in two runs, and Robinson scored once.

Following the conclusion of the game, a trio of Spartans in Ward, Chase Anderson and Jonathan Mahoney were recognized as members of the all-tournament team.

Mahoney pitched six innings of two-run ball with nine strikeouts in the Spartan’s tournament-opening win over FAMU on Thursday. Anderson pitched a complete game, limited North Carolina A&T to two runs and struck out eight in NSU’s win over the Aggies on Friday. Lastly, Ward collected six hits, two of which left the park, with five RBI and five runs scored across four tournament games.