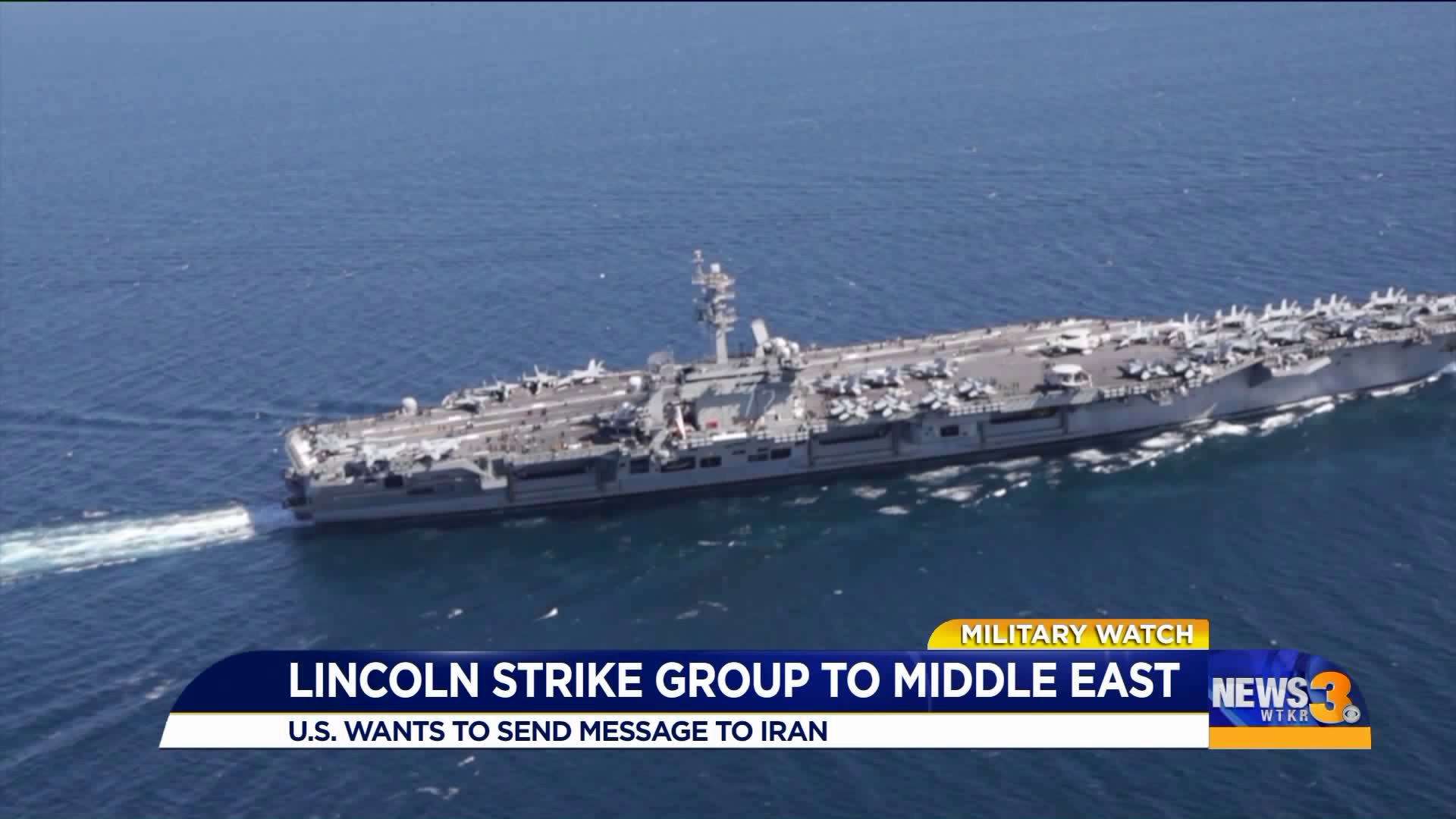 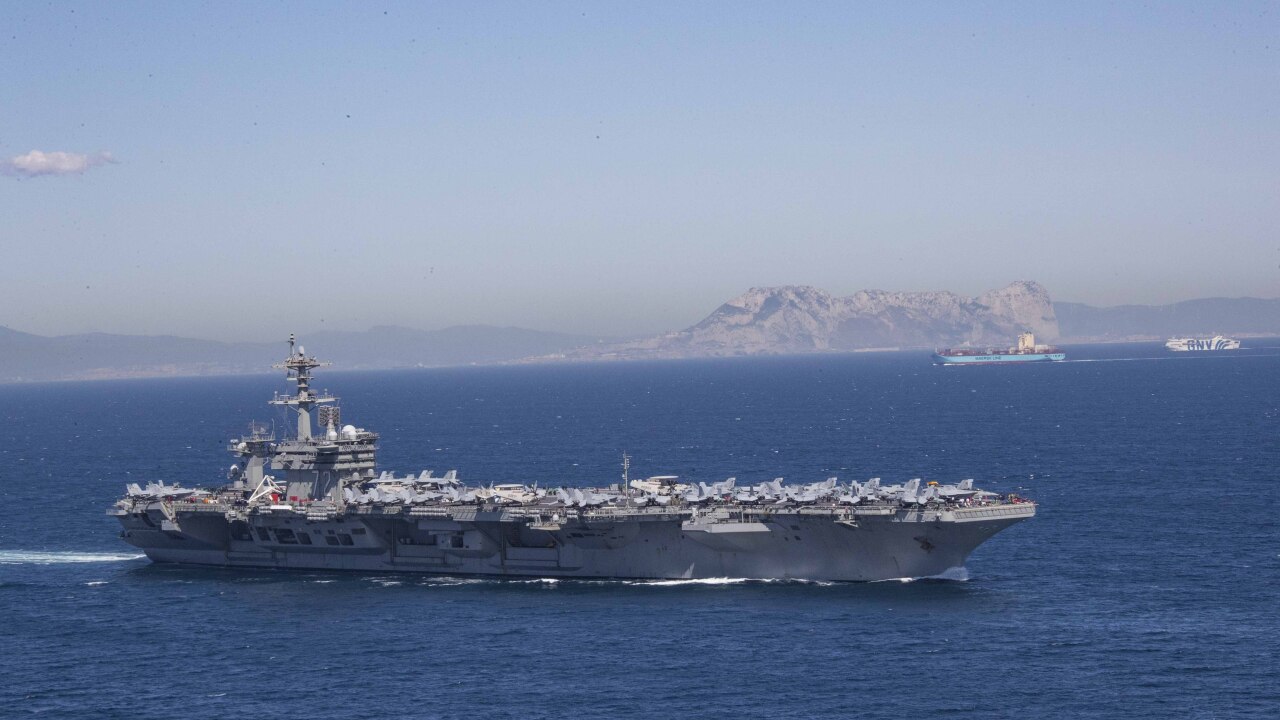 NORFOLK, Va. - The United States is sending the USS Abraham Lincoln Carrier Strike Group to the U.S. Central Command Region to "send a clear and unmistakable message" to Iran, according to a Sunday night statement from National Security Advisor John Bolton.

The Lincoln and ships from the strike group deployed from Naval Station Norfolk on April 1st.

The statement from the White House, US national security adviser John Bolton said Sunday, says the move is "In response to a number of troubling and escalatory indications and warnings." It goes on to say that "any attack on United States interests or on those of our allies will be met with unrelenting force."

The full statement from Bolton is here:

In response to a number of troubling and escalatory indications and warnings, the United States is deploying the USS Abraham Lincoln Carrier Strike Group and a bomber task force to the U.S. Central Command region to send a clear and unmistakable message to the Iranian regime that any attack on United States interests or on those of our allies will be met with unrelenting force.  The United States is not seeking war with the Iranian regime, but we are fully prepared to respond to any attack, whether by proxy, the Islamic Revolutionary Guard Corps, or regular Iranian forces.

The Lincoln was recently operating alongisde the USS John C. Stennis in the Mediterranean Sea, marking the first dual-carrier operations in the region since 2016.

At the end of the deployment, the Lincoln is scheduled to shift to a new homeport of San Diego, while the Stennis will move to Hampton Roads to prepare for mid-life refueling and overhaul in Newport News.

In comments made Sunday night, US Secretary of State Mike Pompeo said the deployments have been in the works for "a little while."

The US announcement comes on the heels several recent events that have increased US-Iran tensions, said Nishank Motwani, a visiting fellow at the Asia-Pacific College of Diplomacy in Australia.

Those include the US designating Iran's Islamic Revolutionary Guard Corps, Tehran's most powerful military institution, a terrorist organization, and Iran responding with the same designation for the US military's Central Command, which oversees the Middle East region; and the US eliminating waivers for some countries to buy Iranian oil and avoid US sanctions, Motwani said.

On the oil issue, Iranian Foreign Minister Javad Zarif said two weeks ago that Iran would continue to sell its oil on world markets and the US should not try to stop it.

"If the United States takes the crazy measure of trying to prevent us from doing that," Zarif said, "then it should be prepared for the consequences."

US security officials at that time expressed concern that Tehran could respond asymmetrically by targeting US facilities and personnel around the Middle East.

But Motwani said that would be a bad idea for Tehran.

"I don't think it's in Iran's interest to escalate tensions. It would give the US a reason to take on Iran," he said.

And that might cause Iran to lose support its trying to maintain among European countries who have stuck to the Iran nuclear deal that US President Donald Trump abandoned.

Zarif, the Iranian foreign minister, said two weeks ago that he believes some members of the Trump administration, but not Trump himself, and some US allies seek a confrontation with Tehran.

"The B Team is pushing US policy toward a disaster," Zarif said

"It is not a crisis yet, but it is a dangerous situation. Accidents, plotted accidents, are possible. I wouldn't discount the B team plotting an accident anywhere in the region particularly as we get closer to the election," Zarif said.

Motwani noted that Monday's announcement of the US carrier and bomber deployments came first from Bolton, who has pushed a hardline policy toward Iran.

"The language is stronger, and part of it has to do with the hawkish stance of this administration," Motwani said.

A US official said acting Secretary of Defense Patrick Shanahan approved the deployments on Sunday because of "clear indications that Iranian and Iranian proxy forces are making preparations to possibly attack US forces in the region (Middle East)."

However, it is routine for the Pentagon to move forces in and out of the Middle East region.

For instance, the US Air Force pulled B-1 bombers from an airbase in Qatar in March after six-month deployment, according to the website of Dyess Air Force Base in Texas, to which the bombers returned.

And the US Navy has been without an aircraft carrier in the Persian Gulf since early April, when the USS John C. Stennis Carrier Strike Group departed to head to the Mediterranean for exercises with the Lincoln Carrier Strike Group, according to the US Naval Institute's Fleet and Marine Tracker.

But a future carrier movement to the Persian Gulf was likely, and the Lincoln's move may just be that accelerated.

The Air Force has sent two squadrons of F-35A stealth fighters to the United Arab Emirates in the past month. In late April, those planes saw their first combat, striking ISIS targets in Iraq.

This is a developing story, stay with News 3 for updates