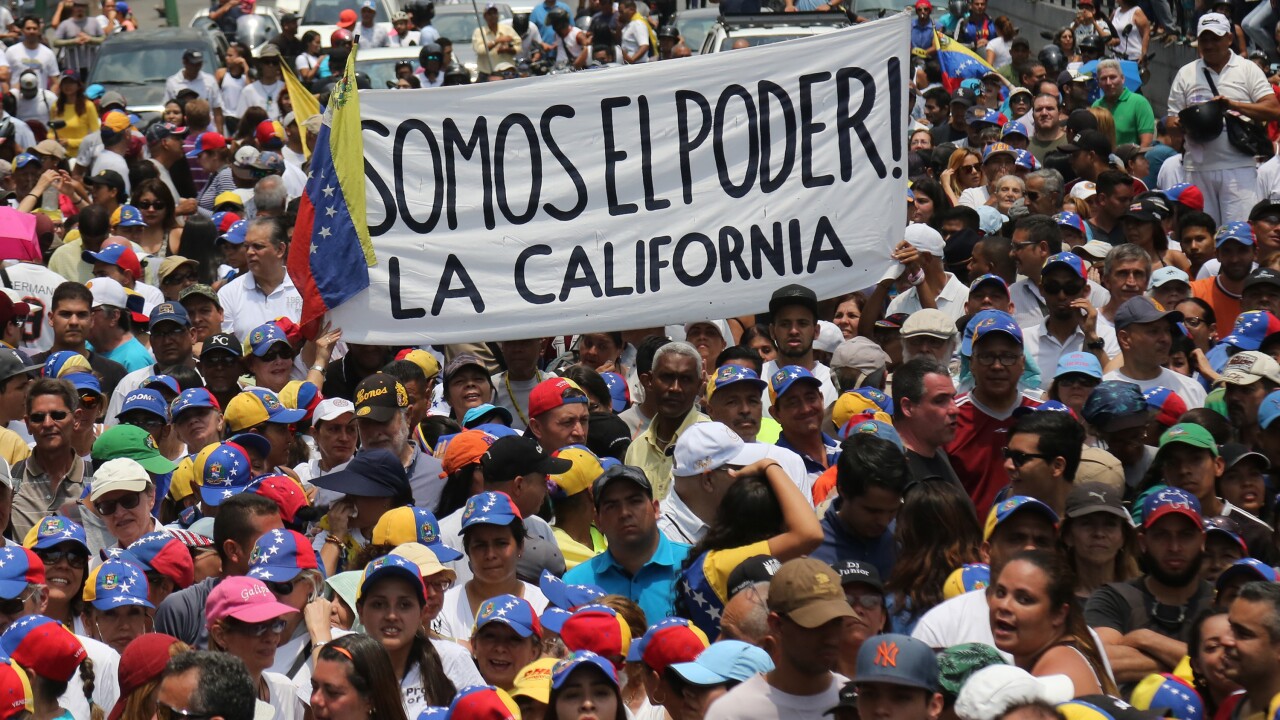 CARACAS, VENEZUELA – MAY 01: Supporters of Venezuelan opposition leader Juan Guaidó holds a banner that reads ‘We are the power’ during a demonstration at avenida Francisco de Miranda on May 1, 2019 in Caracas, Venezuela. Yesterday, Juan Guaidó, recognized by many members of the international community as the country’s rightful interim ruler, urged an uprise to take Nicolas Maduro out of power. (Photo by Edilzon Gamez/Getty Images) 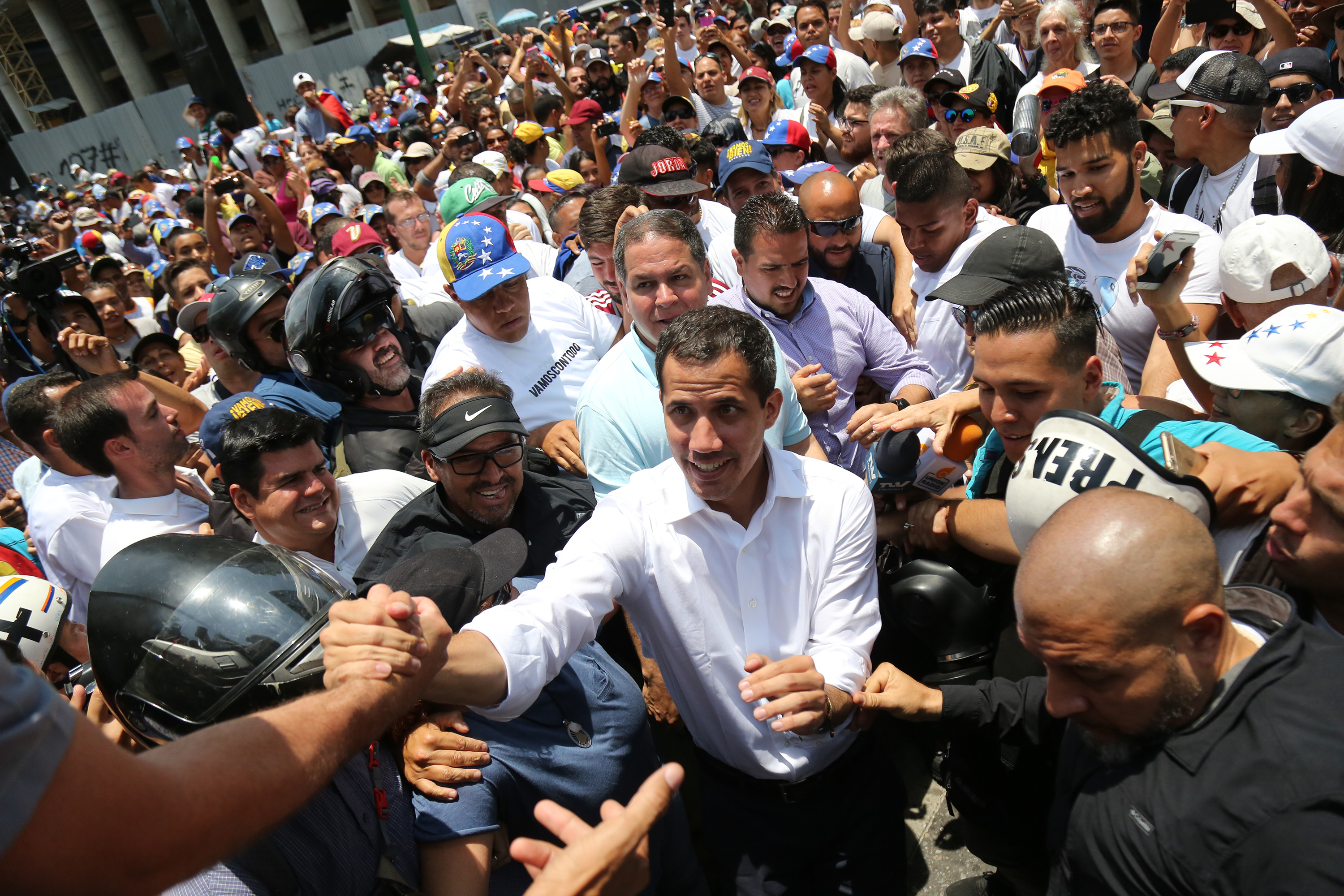 Venezuela’s embattled President Nicolas Maduro has claimed his troops have defeated a “coup” attempt amid calls by opposition leader Juan Guaido for protesters to return to the streets Wednesday.

In a live televised address Tuesday night, his first since the apparent uprising began, Maduro rejected claims he has lost control of the military and accused “imperialist” forces of seeking “to attack and overthrow a legitimate government to enslave Venezuela.”

“We have been facing various forms of coup d’etat, due to the obsessive efforts of the Venezuelan right, the Colombian oligarchy and the US empire,” Maduro explained, adding that the military air base Guaido had spoken from earlier in the morning was never under the control of the opposition.

The speech followed a dawn address from Guaido Tuesday, in which the young opposition leader, standing alongside a group of soldiers in the capital Caracas, announced an uprising to seize power from Maduro. It marked the most serious challenge to Maduro’s leadership so far and unleashed a day of street protests and skirmishes.

In a follow-up video post, recorded from an unknown location and posted Tuesday evening, Guaido called for renewed action “over the expanse and length of Venezuela.”

He urged “all of Venezuela” to protest on International Worker’s Day, a globally celebrated holiday that falls on May 1.

Despite the government’s claims that the Tuesday uprising had been quashed, Guaido, who is the head of Venezuela’s National Assembly, said that “Operation Freedom” would continue.

In the video speech, Guaido said that Maduro no longer had the “support nor the respect of the armed forces.”

He asked the military to help advance “Operation Freedom,” which he described as a mission to rescue “our dignity, our country, our people, our family — that is the challenge.”

On Tuesday, protesters made their way to the city’s La Carlota military airbase, sparking confrontations between Guaido’s military supporters and Maduro regime loyalists under a cloud of tear gas as gunshots rang through the air.

More than 70 people were injured in the clashes and were taken to Salud Chacao Medical Center in Caracas, according to the hospital’s president.

Of the injured, 42 were wounded with rubber bullets and two were treated for gunshot wounds. According to Venezuela Minister of Defense Vladimir Padrino, a military colonel was also shot during clashes.

Opposition figure Leopoldo Lopez — apparently freed from house arrest by defecting soldiers — had taken refuge in the Chilean diplomatic mission residency, and by Tuesday night was being relocated, alongside his family, to the Spanish Embassy in Caracas.

US: Maduro attempts to flee thwarted

US Secretary of State Mike Pompeo had claimed Tuesday that Maduro was on the cusp of fleeing to Cuba before being talked into staying by Moscow. Speaking at an event in Washington, DC, on Tuesday night, he said that the US State Department, intelligence community and military were all “very focused on protecting the Venezuelan people, restoring their dignity, growing their economy.”

Pompeo said that the US government was “committed to creating democracy here in the Western Hemisphere” and that Venezuela faced “the singularly worst humanitarian crisis, absent conflict, absent war, in the history of the world.”

In his televised address Tuesday, Maduro denied Pompeo’s claims that he was preparing to abscond, calling them “craziness” and “lies and manipulation.”

“Please, Mr. Pompeo, you’re not being serious,” he said. Russian Foreign Ministry spokeswoman Maria Zakharova also denied the US claims, telling CNN that “Washington tried its best to demoralize the Venezuelan army and now used fakes as a part of information war.”

When Guaido announced his alternative government the beginning of the year he was backed by the US and dozens of other nations. Since then, Venezuela — which is mired in a deep political and humanitarian crisis — has had two men claiming to be president.