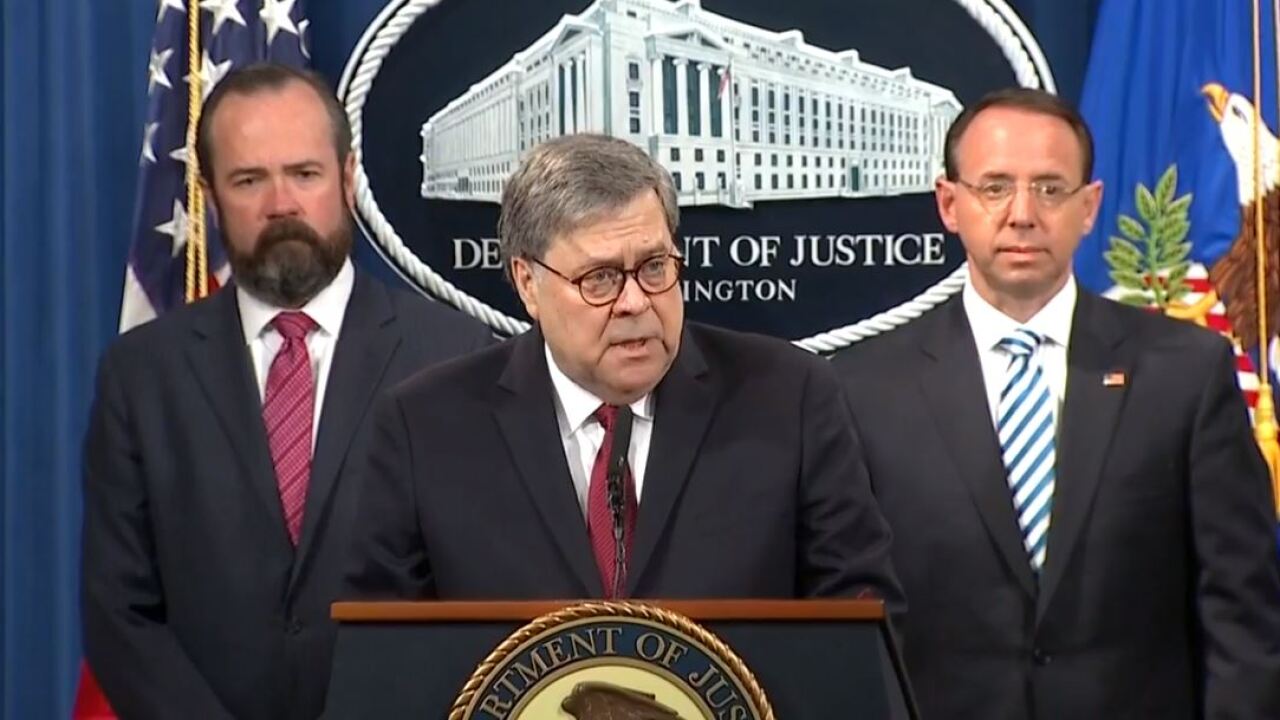 Attorney General William Barr said at a press conference Thursday morning ahead of the Mueller report’s release that the special counsel’s report did not find “collusion” between the Trump campaign and the Russian government.

“The special counsel’s report did not find any evidence that members of the Trump campaign or anyone associated with the campaign conspired or coordinated with the Russian government in its hacking operations,” Barr said.

“In other words, there was no evidence of Trump campaign ‘collusion’ with the Russian government’s hacking,” he added.

After Barr said there was no evidence of collusion President Trump tweeted Game of Thrones looking message saying “game over.”

Here is a copy of the full remarks as prepared for delivery:

“Good Morning. Thank you all for being here today.

On March 22, 2019, Special Counsel Robert Mueller concluded his investigation of matters related to Russian attempts to interfere in the 2016 presidential election and submitted his confidential report to me pursuant to Department of Justice regulations.

As I said during my Senate confirmation hearing and since, I am committed to ensuring the greatest possible degree of transparency concerning the Special Counsel’s investigation, consistent with the law.

At 11:00 this morning, I will transmit copies of a public version of the Special Counsel’s report to the Chairmen and Ranking Members of the House and Senate Judiciary Committees. The Department of Justice will also make the report available to the American public by posting it on the Department’s website after it has been delivered to Congress.

I would like to offer a few comments today on the report.

But before I do that, I want to thank Deputy Attorney General Rod Rosenstein for joining me here today and for his assistance and counsel throughout this process. Rod has served the Department of Justice for many years with dedication and distinction, and it has been a great privilege and pleasure to work with him since my confirmation. He had well-deserved plans to step back from public service that I interrupted by asking him to help in my transition. Rod has been an invaluable partner, and I am grateful that he was willing to help me and has been able to see the Special Counsel’s investigation to its conclusion. Thank you, Rod.

I would also like to thank Special Counsel Mueller for his service and the thoroughness of his investigation, particularly his work exposing the nature of Russia’s attempts to interfere in our electoral process.

I am sure that all Americans share my concerns about the efforts of the Russian government to interfere in our presidential election. As the Special Counsel’s report makes clear, the Russian government sought to interfere in our election. But thanks to the Special Counsel’s thorough investigation, we now know that the Russian operatives who perpetrated these schemes did not have the cooperation of President Trump or the Trump campaign — or the knowing assistance of any other Americans for that matter. That is something that all Americans can and should be grateful to have confirmed.

The Special Counsel’s report outlines two main efforts by the Russian government to influence the 2016 election:

First, the report details efforts by the Internet Research Agency, a Russian company with close ties to the Russian government, to sow social discord among American voters through disinformation and social media operations. Following a thorough investigation of this disinformation campaign, the Special Counsel brought charges in federal court against several Russian nationals and entities for their respective roles in this scheme. Those charges remain pending, and the individual defendants remain at large.

But the Special Counsel found no evidence that any Americans — including anyone associated with the Trump campaign — conspired or coordinated with the Russian government or the IRA in carrying out this illegal scheme. Indeed, as the report states, “[t]he investigation did not identify evidence that any U.S. persons knowingly or intentionally coordinated with the IRA’s interference operation.” Put another way, the Special Counsel found no “collusion” by any Americans in the IRA’s illegal activity.

Second, the report details efforts by Russian military officials associated with the GRU to hack into computers and steal documents and emails from individuals affiliated with the Democratic Party and the presidential campaign of Hillary Rodham Clinton for the purpose of eventually publicizing those emails. Obtaining such unauthorized access into computers is a federal crime. Following a thorough investigation of these hacking operations, the Special Counsel brought charges in federal court against several Russian military officers for their respective roles in these illegal hacking activities. Those charges are still pending and the defendants remain at large.

The Special Counsel’s investigation also examined Russian efforts to publish stolen emails and documents on the internet. The Special Counsel found that, after the GRU disseminated some of the stolen materials through its own controlled entities, DCLeaks and Guccifer 2.0, the GRU transferred some of the stolen materials to Wikileaks for publication. Wikileaks then made a series of document dumps. The Special Counsel also investigated whether any member or affiliate of the Trump campaign encouraged or otherwise played a role in these dissemination efforts. Under applicable law, publication of these types of materials would not be criminal unless the publisher also participated in the underlying hacking conspiracy. Here too, the Special Counsel’s report did not find that any person associated with the Trump campaign illegally participated in the dissemination of the materials.

Finally, the Special Counsel investigated a number of “links” or “contacts” between Trump Campaign officials and individuals connected with the Russian government during the 2016 presidential campaign. After reviewing those contacts, the Special Counsel did not find any conspiracy to violate U.S. law involving Russia-linked persons and any persons associated with the Trump campaign.

So that is the bottom line. After nearly two years of investigation, thousands of subpoenas, and hundreds of warrants and witness interviews, the Special Counsel confirmed that the Russian government sponsored efforts to illegally interfere with the 2016 presidential election but did not find that the Trump campaign or other Americans colluded in those schemes.

After carefully reviewing the facts and legal theories outlined in the report, and in consultation with the Office of Legal Counsel and other Department lawyers, the Deputy Attorney General and I concluded that the evidence developed by the Special Counsel is not sufficient to establish that the President committed an obstruction-of-justice offense.

In assessing the President’s actions discussed in the report, it is important to bear in mind the context. President Trump faced an unprecedented situation. As he entered into office, and sought to perform his responsibilities as President, federal agents and prosecutors were scrutinizing his conduct before and after taking office, and the conduct of some of his associates. At the same time, there was relentless speculation in the news media about the President’s personal culpability. Yet, as he said from the beginning, there was in fact no collusion. And as the Special Counsel’s report acknowledges, there is substantial evidence to show that the President was frustrated and angered by a sincere belief that the investigation was undermining his presidency, propelled by his political opponents, and fueled by illegal leaks. Nonetheless, the White House fully cooperated with the Special Counsel’s investigation, providing unfettered access to campaign and White House documents, directing senior aides to testify freely, and asserting no privilege claims. And at the same time, the President took no act that in fact deprived the Special Counsel of the documents and witnesses necessary to complete his investigation. Apart from whether the acts were obstructive, this evidence of non-corrupt motives weighs heavily against any allegation that the President had a corrupt intent to obstruct the investigation.

Now, before I take questions, I want to address a few aspects of the process for producing the public report that I am releasing today. As I said several times, the report contains limited redactions relating to four categories of information. To ensure as much transparency as possible, these redactions have been clearly labelled and color-coded so that readers can tell which redactions correspond to which categories.

As you will see, most of the redactions were compelled by the need to prevent harm to ongoing matters and to comply with court orders prohibiting the public disclosure of information bearing upon ongoing investigations and criminal cases, such as the IRA case and the Roger Stone case.

These redactions were applied by Department of Justice attorneys working closely together with attorneys from the Special Counsel’s Office, as well as with the intelligence community, and prosecutors who are handling ongoing cases. The redactions are their work product.

Consistent with long-standing Executive Branch practice, the decision whether to assert Executive privilege over any portion of the report rested with the President of the United States. Because the White House voluntarily cooperated with the Special Counsel’s investigation, significant portions of the report contain material over which the President could have asserted privilege. And he would have been well within his rights to do so. Following my March 29th letter, the Office of the White House Counsel requested the opportunity to review the redacted version of the report in order to advise the President on the potential invocation of privilege, which is consistent with long-standing practice. Following that review, the President confirmed that, in the interests of transparency and full disclosure to the American people, he would not assert privilege over the Special Counsel’s report. Accordingly, the public report I am releasing today contains redactions only for the four categories that I previously outlined, and no material has been redacted based on executive privilege.

In addition, earlier this week, the President’s personal counsel requested and were given the opportunity to read a final version of the redacted report before it was publicly released. That request was consistent with the practice followed under the Ethics in Government Act, which permitted individuals named in a report prepared by an Independent Counsel the opportunity to read the report before publication. The President’s personal lawyers were not permitted to make, and did not request, any redactions.

In addition to making the redacted report public, we are also committed to working with Congress to accommodate their legitimate oversight interests with respect to the Special Counsel’s investigation. We have been consulting with Chairman Graham and Chairman Nadler throughout this process, and we will continue to do so.

Given the limited nature of the redactions, I believe that the publicly released report will allow every American to understand the results of the Special Counsel’s investigation. Nevertheless, in an effort to accommodate congressional requests, we will make available to a bipartisan group of leaders from several Congressional committees a version of the report with all redactions removed except those relating to grand-jury information. Thus, these members of Congress will be able to see all of the redacted material for themselves — with the limited exception of that which, by law, cannot be shared.

I believe that this accommodation, together with my upcoming testimony before the Senate and House Judiciary Committees, will satisfy any need Congress has for information regarding the Special Counsel’s investigation.

Once again, I would like to thank you all for being here today. I now have a few minutes for questions.” 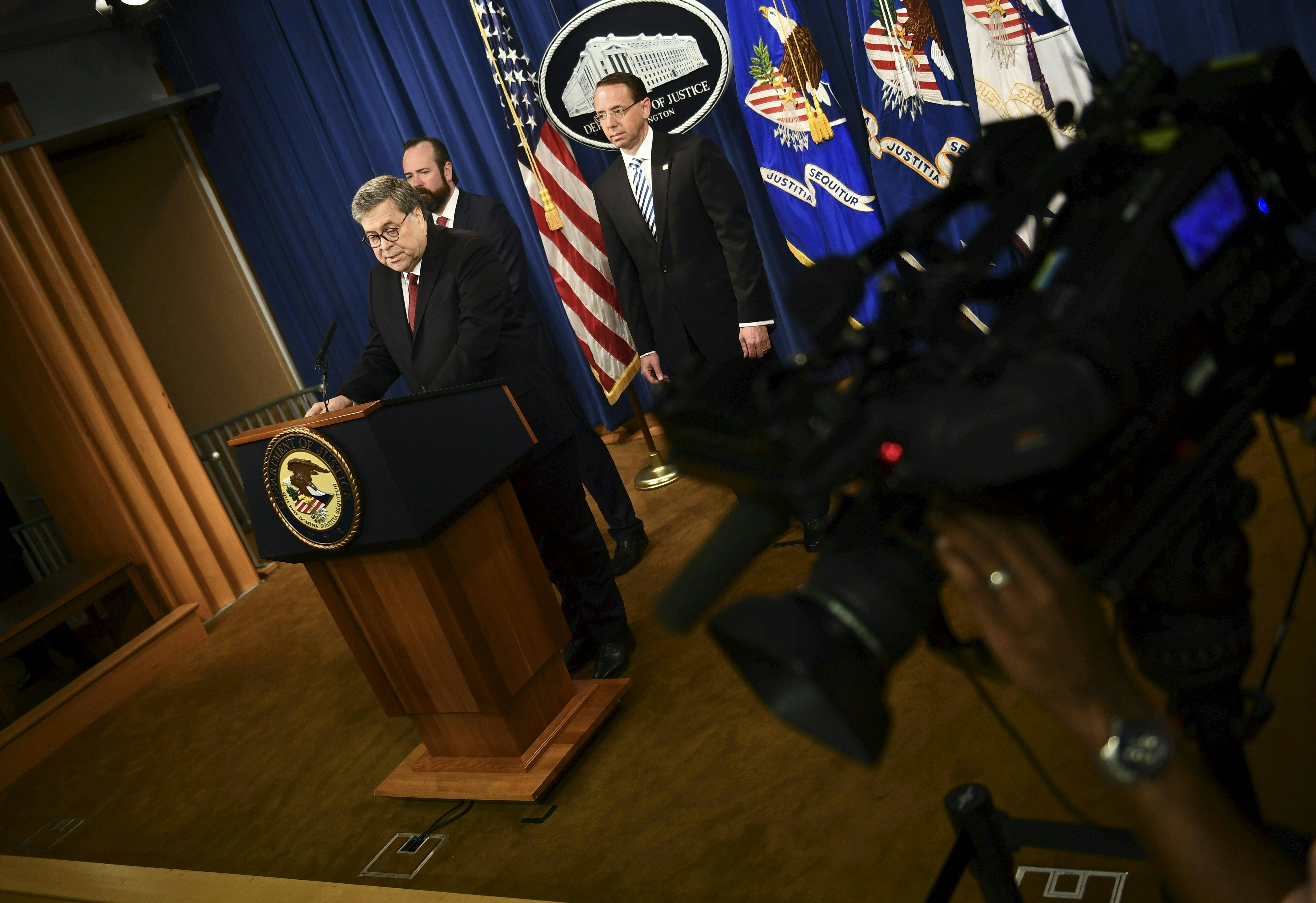