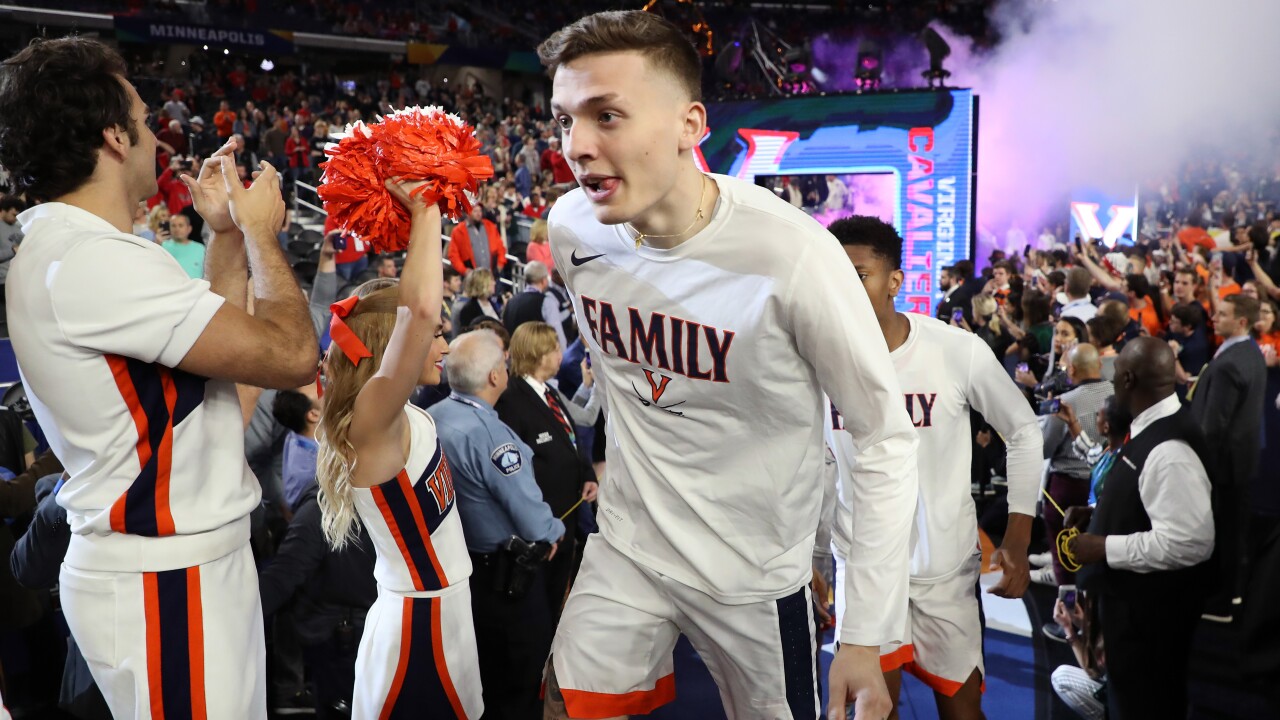 Kyle Guy #5 of the Virginia Cavaliers takes the court prior to the 2019 NCAA Final Four semifinal against the Auburn Tigers. (Photo by Streeter Lecka/Getty Images)

CHARLOTTESVILLE, Va. – The defending champs will look quite a bit different in 2019-2020.

Tuesday, one day after UVA men’s basketball standouts Ty Jerome and De’Andre Hunter announced plans to forego their remaining eligibility and enter the 2019 NBA Draft, Kyle Guy does the same.

In a post on his Twitter account, Guy, a third-team All-American in 2018-19, says he will sign with an agent and dive in “with two feet to achieve my dream.” However, Guy does say he will “leave the option of coming back to school open.”

Kyle Guy #5 of the Virginia Cavaliers celebrates with teammates after defeating the Auburn Tigers. (Photo by Streeter Lecka/Getty Images)

Under new NCAA rules, Guy can sign with an NCAA-certified agent, receive feedback and still return to UVA. The Virginia coaching staff will be involved throughout the process.

“I set a goal with my brothers when we committed to UVA,” Guy said. “Three years later we accomplished that goal of winning a national championship. I also set a goal for myself to play in the NBA.”

In three seasons with the Wahoos, Guy ranks 26th on UVA’s career scoring list with 1,323 points. He was named the Most Outstanding Player of the 2019 NCAA men’s Final Four following Virginia’s first ever national championship.

Guy averaged 19.5 points in wins over Auburn and Texas Tech at the Final Four. He sank three free throws with 0.6 seconds remaining to lift Virginia to a 63-62 win over the Tigers in the national semifinals. Guy added 24 points in the Cavaliers’ 85-77 overtime win against the Red Raiders in the title game. Guy led Virginia in scoring at 15.4 points per game. Guy ranks first all-time at UVA in 3-point percentage (42.5%) and second in made 3-pointers (254).

He is the third underclassman from the 2018-19 Cavaliers to declare for the 2019 NBA Draft, joining redshirt sophomore guard De’Andre Hunter and junior point guard Ty Jerome. Hunter and Jerome plan to remain in the draft, ending their decorated collegiate careers.

Beyond blessed. Very excited for this journey. 5 out ❤️ Thanks to everyone who had a hand in this!!! pic.twitter.com/EBSspocjcj