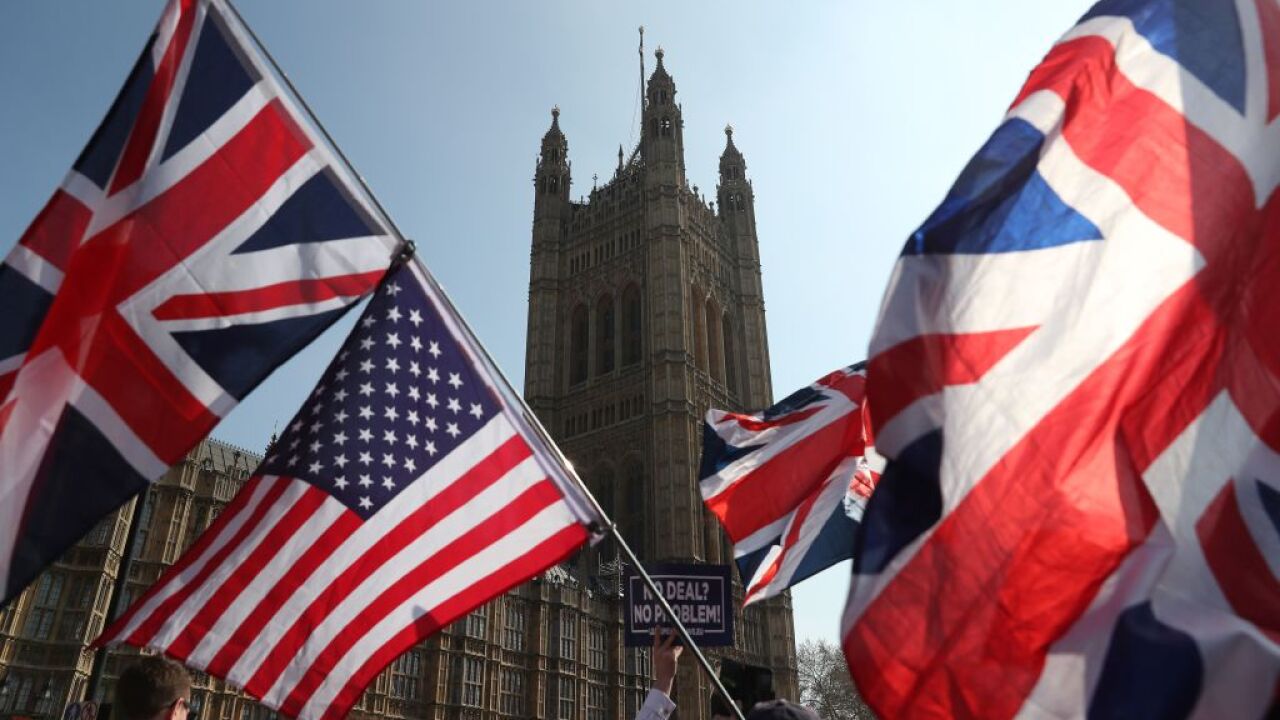 Pro-Brexit demonstrators march past the Houses of Parliament in central London on March 29, 2019. – MPs are set for a momentous third vote today on Prime Minister Theresa May’s Brexit deal, which could end a months-long political crisis or risk Britain crashing out of the EU in two weeks. (Photo by Daniel LEAL-OLIVAS / AFP) (Photo credit should read DANIEL LEAL-OLIVAS/AFP/Getty Images)

Brexit could be delayed for up to six months after the European Union offered the UK a flexible extension with an earlier exit date if Prime Minister Theresa May can get her defeated withdrawal deal through British parliament.

After a working dinner that dragged long into the evening, leaders of the 27 remaining nations agreed another delay to Britain’s scheduled withdrawal, this time until October 31, with a review in June, an EU diplomat told CNN.

President of the European Council Donald Tusk indicated that May had accepted the offer, saying in a post on Twitter that the EU and United Kingdom had agreed a “flexible extension” until October 31.

Pro-Brexit demonstrators march past the Houses of Parliament in central London on March 29, 2019. – MPs are set for a momentous third vote today on Prime Minister Theresa May’s Brexit deal, which could end a months-long political crisis or risk Britain crashing out of the EU in two weeks. (Photo by Daniel LEAL-OLIVAS / AFP) (Photo credit should read DANIEL LEAL-OLIVAS/AFP/Getty Images)

“This means additional six months for the UK to find the best possible solution,” Tusk added.

May had sought a shorter delay to June 30 in order to avoid the UK crashing out at the end of the week, as it had been on course to do.

The longer extension, which happens to fall on Halloween, comes a day before the new European Commission is expected to take up office.

The date appears to be a compromise between two rival schools of thought within the EU 27, with French President Emmanuel Macron having advocated for a shorter Brexit extension and other EU leaders backing a longer delay of up to a year.

While the European Union’s decision to grant a so-called “flextension” allows the UK to leave as soon as it’s ready, the optics aren’t great for the Prime Minister.

The longer delay reflects doubts among EU leaders that May can succeed in swiftly winning cross-party support for her withdrawal agreement, which members of parliament have rejected three times.

It will also infuriate hardliners within her own Conservative Party, who view any further delay as a path to a softer Brexit or a signal that leaving the EU may never materialize at all.

Hardline Brexiteers have indicated that, should the UK remain stuck in the union, then it will “become a Trojan horse within the EU,” using British members of the European Parliament to create difficulties with key issues like the budget. That is a risk that the European leaders seem to have provided for.

Draft conclusions from the meeting, seen by CNN, instructed Britain not to interfere with the processes of the EU, with assurances aimed at satisfying Macron.

The extra breathing room granted by the EU also comes with the express instruction that the Brexit deadlock in London needs to be broken.

It seems unlikely given that talks between the Labour Party and Conservative Party have led nowhere. Sticking points seem to be the UK remaining in a customs union after Brexit, which Labour backs, but it’s still divided on whether to ask British voters to ratify any deal in a second referendum. The Irish backstop, a provision to prevent a hard border on the island of Ireland, also has to be resolved.

With a longer extension at play and no immediate pressure to reach an agreement in sight, Britain may find itself having to hold elections for the European Parliament on May 23, nearly three years after the British people voted to leave the bloc.

And whether this prolonged extension could spell an end to May’s leadership, triggering new elections, remains to be seen.