No survivors in Ethiopian Airlines Boeing 737 crash near Addis Ababa 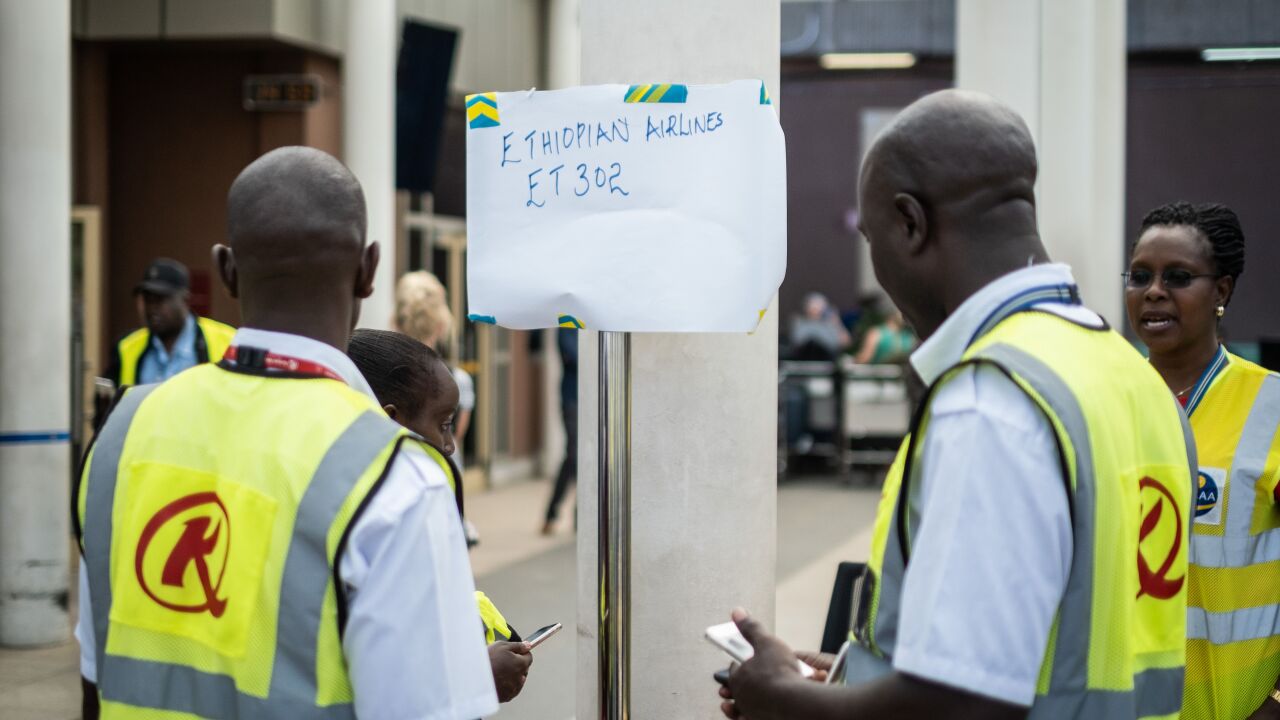 Airport staff install a help desk for the crashed Ethiopia airlines flight at the inernational arrival of the Jomo Kenyatta International Airport in Nairobi, Kenya, on March 10, 2019. – There were no survivors among the 149 passengers and eight crew on board a Nairobi-bound Boeing 737 that crashed shortly after takeoff from Addis Ababa, Ethiopian Airlines said on March 10. (Photo by Yasuyoshi CHIBA / AFP) (Photo credit should read YASUYOSHI CHIBA/AFP/Getty Images)

All 157 people on board an Ethiopian Airlines flight that crashed soon after taking off from Addis Ababa have been killed, the airline said on Sunday morning.

The plane, en route to Nairobi, Kenya, lost contact at 08.44 am local time, six minutes after taking off from Bole International Airport in the Ethiopian capital.

The aircraft, flight number ET 302, went down near Bishoftu, southeast of Addis Ababa. An airline spokesperson told CNN the victims were of 35 different nationalities.

Eight Chinese passengers were also on board, said Li Liang, spokesperson for the Chinese Embassy to Ethiopia.

Here are the nationalities of the passengers and security official, according to the airline, which has not yet reported the crew members’ home countries:

And one passenger was traveling on a UN passport.

During a press conference on Sunday, Ethiopian Airlines officials said the Canadian-European pilot had flown more than 8,000 hours and had captained a 737 since November 2017.

Officials said they have yet to determine what caused the “brand-new plane,” which had flown for only 1,400 hours, to crash.

“The group CEO who is at the accident scene right now regrets to confirm that there are no survivors,” Ethiopian Airlines wrote on Twitter. “He expresses his profound sympathy and condolences to the families and loved ones of passengers and crew who lost their lives in this tragic accident.”

The airline said in an earlier statement that staff would “be sent to the accident scene and will do everything possible to assist the emergency services.”

It added that a passenger information center and hotline “will be available shortly for family or friends of those who may have been on flight.”

The Ethiopian government expressed its “deepest condolences to the families,” the office of Prime Minister Abiy Ahmed, who first broke the news of the crash, said on Twitter.

Airport staff install a help desk for the crashed Ethiopia airlines flight at the inernational arrival of the Jomo Kenyatta International Airport in Nairobi, Kenya, on March 10, 2019. – There were no survivors among the 149 passengers and eight crew on board a Nairobi-bound Boeing 737 that crashed shortly after takeoff from Addis Ababa, Ethiopian Airlines said on March 10. (Photo by Yasuyoshi CHIBA / AFP) (Photo credit should read YASUYOSHI CHIBA/AFP/Getty Images)

Ethiopian Airlines has gained the reputation of being one of the best airlines in Africa. It has a good safety record and the newest fleet of planes on the African continent, according to its website.

“Ethiopian Airlines is a very, very well-run airline,” said CNN anchor Richard Quest, who specializes in aviation. “There is no safety issue on Ethiopian. They’ve made it their business to be the African airline that operates like a western airline.”

The Boeing 737 MAX 8 is the same type of plane as the Indonesian Lion Air jet that crashed soon after takeoff from Jakarta in 2018 — killing 189 people.

But Geoffrey Thomas, the editor in chief of Airline Ratings, told CNN the Ethiopian Airlines crash on Sunday had “significant differences” to the Lion Air crash last year. On the Lion Air flight, there were “wild fluctuations in air speed and… we continued to get data from the plane all the way down to impact.”

Sunday’s crash, however, had “no fluctuations and all of the sudden transmission” ceased, he said. “That transmission ceasing indicates catastrophic failure in air.”

“I think [Ethiopian Airlines] are going to be looking at whether there was an engine failure,” CNN’s Quest said. “The plane is climbing out at a normal fashion, but there are mountains in the area, and longstanding pilots are well aware that if you have an issue departing Addis on that particular route, you’ve got a mountain in front of you.”

The aerospace giant said in a press statement that it was “deeply saddened to learn of the passing of the passengers and crew.” It added that a “Boeing technical team is prepared to provide technical assistance at the request and under the direction of the U.S. National Transportation Safety Board.”

The last major accident involving an Ethiopian Airlines passenger plane was in January 2010, when a flight from Beirut went down, killing 83 passengers and seven crew.