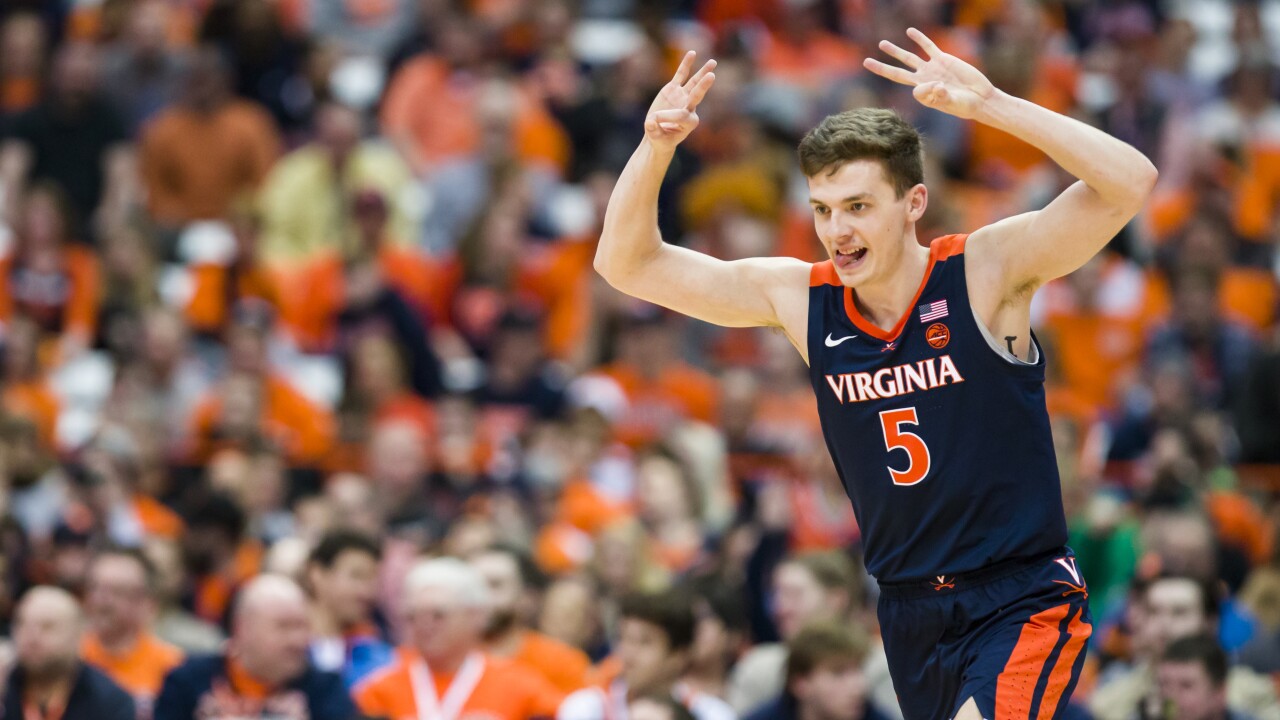 The Cavaliers outscored the Orange 47-19 in the second half, making 10 of their threes after halftime. UVA shot 72 percent beyond the arc and was 54.9 percent from the floor.

HOW IT HAPPENED
UVA’s first six baskets of the game were three-pointers. The Cavaliers and Orange traded the lead several times in the first half, but Syracuse had the 35-32 edge at the half. Down 43-42, Virginia mounted a 35-6 run over 12 minutes with eight threes in that span to lead 77-49. Virginia outscored Syracuse 37-10 over the final 14 minutes of the game.

THE GAME BALL GOES TO
UVA’s offense was sparked by hot shooting from Guy, Hunter and Jerome. Each player had at least five 3-pointers. Guy finished 8-for-10 from 3-point range. Hunter was 5-for-7 beyond the arc and Jerome finished 5-for-6 with a career-high and school record tying 14 assists.

NOTES
• Virginia matched a school record with 18 3-pointers (Gonzaga, 2007)
• UVA went 8 of 12 from 3-point range in the first half and finished 18 of 25
• The Cavaliers have held the Orange to 68 or fewer points in each of the past eight meetings between the teams.
• UVA has held 23 opponents to 40 percent or less field-goal shooting and 26 opponents to 33 percent or less 3-point shooting
• Guy drilled a career-high eight 3-pointers, second most in school history (Curtis Staples, nine)
• Jerome had 16 points and a career-high 14 assists (tying a school record) for his third career double-double
• Hunter had a career-high five 3-pointers and career-best three blocked shots
• Mamadi Diakite matched a career high with four blocked shots
• Hunter (10), Jerome (10) and Guy (10) scored 30 of UVA’s 32 first half points

QUOTES
Have you ever seen your shooters perform that well from deep in a game like this?
“Those guys were terrific in the second half. There were probably three or four incredibly deep threes. I think that Kyle (Guy) was looking at the ground when he shot those. That was impressive. And then to have all three of them (Kyle Guy, Ty Jerome, and Deandre Hunter) get that hot was good and then they combined it with really good defense in the second half. I think there were about 14 or 16 stops where they did miss some shots, but I thought we were better at contesting. We had eight turnovers and eight offensive rebounds given up in the first half. We tightened that up in the second half. Ty (Jerome) was really good in the high post as was Deandre (Hunter) and then Kyle (Guy) stretched the floor so we put guys in some spots that we thought would cause some trouble for them if we were making shots. It’s a terrific zone and we just had our night tonight against it. And they were a little off offensively, but that’s not to take away from the second half and the way our guys played there. It’s hard to beat a team when a team is clicking that way with not just one guy, but three guys.” -Head coach Tony Bennett

UP NEXT
Virginia closes out the regular season on Saturday, March 9, hosting Louisville at 4 p.m. at John Paul Jones Arena for Senior Day.