Walmart made changes to greeter jobs at stores. Workers with disabilities got squeezed 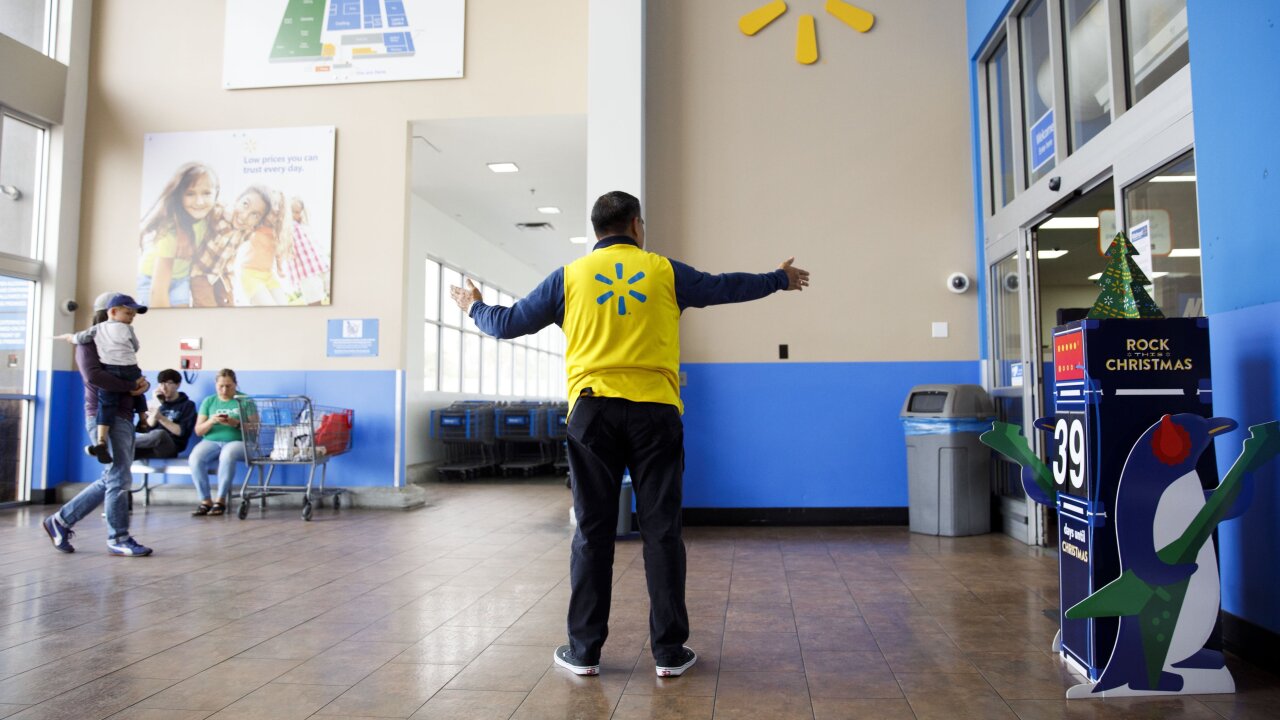 Walmart is making changes to policies for its store greeters with disabilities after some of those workers said their jobs were in jeopardy. Full credit: Patrick T. Fallon/Bloomberg/Getty Images

Walmart is making changes to policies for its store greeters with disabilities after some of those workers said their jobs were in jeopardy.

The policy tweak over the weekend came after recent backlash on social media. A 2016 Walmart policy shift changed the responsibilities for greeters, which led to worries among some workers with disabilities that they would lose their jobs. Those workers will now get more time to find new jobs within the company.

“We recognize that our associates with physical disabilities face a unique situation,” said Walmart spokesperson Justin Rushing. “This allows associates to continue their employment at the store as valued members of the team while we seek an acceptable, customized solution for all of those involved.”

Greeters at the entrance of stores have been a staple of Walmart since the early 1980s, when founder Sam Walton created the job based on a Louisiana store worker’s suggestion.

“Greeters are a big part of our company and culture,” Walmart said in 2016. “Providing customers with an excellent first impression is part of Walmart’s broader strategy to ensure simpler, more convenient shopping.”

Walton and other company executives believed front-door greeters added to the “friendliness of our stores” and helped deter shoplifting, according to former Walmart COO Don Soderquist’s autobiography. Other retailers, including Costco, have relied on store greeters to try to improve the customer experience and prevent theft.

In 2012, Walmart moved greeters from the front door to inside the stores to aid customers in aisles and help with upkeep. But the company quickly reversed course. In 2016, Walmart brought back greeters, but changed the title and expanded the requirements for the job.

Walmart created a new position, “customer host,” that replaced the role of traditional greeters at some Walmart stores. The job came with higher pay and expanded responsibilities like checking receipts, helping with returns, and keeping entrances clean.

Walmart has slowly rolled out the host job to around 1,000 stores since the plan was first introduced, and the switch has created a challenge for workers with disabilities.

As Walmart expanded the program to new stores, some greeters with disabilities were not able meet the new requirements for the position. For the host job, workers must be able to lift 25 pounds, clean up spills, collect carts and stand for long periods of time, NPR reported on Monday, citing interviews with workers and documents it reviewed.

Five Walmart greeters with disabilities who feared losing their jobs in April spoke to NPR, either directly or through a family member.

“It’s been very stressful,” one employee in Alabama whose greeter job is being replaced told NPR. “It gives me a place to go every day, where I’m not sitting at home,” he said of his job at Walmart.

Other stories of greeters with disabilities who were told their greeter jobs will be replaced by host positions gained attention in recent weeks. In Pennsylvania, Adam Catlin, a 10-year Walmart greeter with cerebral palsy, was told that the greeter position at his store was changing. His mother posted his story on Facebook, and it spread online.

Catlin has been offered another role in his store, Rushing said. It plans to offer jobs to other greeters with physical disabilities in the coming weeks. Another longtime greeter with disabilities whose story drew attention, Jay Melton, accepted a job with Walmart as a self-checkout host, the company said on Thursday.

On Thursday, Walmart US CEO Greg Foran wrote a memo to all store managers in the country. He said Walmart was looking into each employee’s case on a case-by-case basis “with the goal of offering appropriate accommodations that will enable these associates to continue in other roles with their store.”