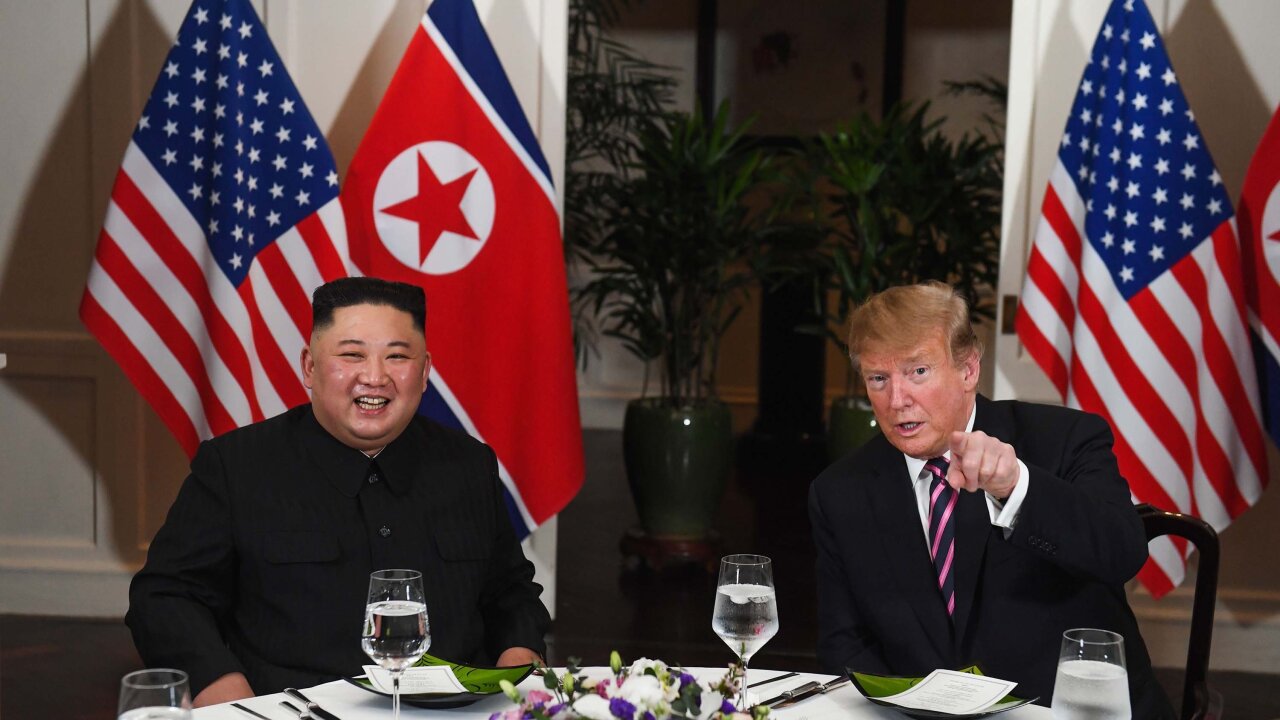 President Donald Trump is pursuing two objectives as he sits down once again with North Korean dictator Kim Jong Un here on Thursday — draw North Korea closer to the prospect of abandoning its nuclear weapons and regain control of the media narrative.

President Donald Trump’s summit with Kim Jong Un, meant to demonstrate his diplomatic gamble with North Korea is working, instead ended with no joint agreement after Kim insisted all US sanctions be lifted on his country.

That was a bridge too far for the President, who said Kim offered to take some steps toward dismantling his nuclear arsenal but not enough to warrant ending the debilitating sanctions regime on the country.

“Sometimes you have to walk and this was just one of those times,” Trump said during a news conference following the conclusion of the summit, which ended sooner than expected.

Trump did not cast the result as a disappointment, instead suggesting it was another step in a lengthy process toward convincing Kim to abandon his nuclear program.

The personal chemistry that Trump has cultivated with the young despotic leader remains intact, the President insisted.

And the summit ended amicably, without either man storming away.

“It was a very friendly walk,” Trump said.

Still, the absence of a joint agreement reflects an anticlimax for a summit event that Trump had hoped would prove naysayers of his diplomacy wrong.

He conceded that US and North Korean officials remain at odds about the precise definition of denuclearization, which is the ostensible goal of his efforts.

“He has a certain vision and it’s not exactly our vision, but it’s a lot closer than it was a year ago and I think eventually we’ll get there,” Trump said. “For this particular visit we decided that we had to walk.”

The President called Kim “quite a guy and quite a character” and said that while they had “some options” they considered, they decided “not to do any of the options.”

The remarks came after Trump kicked off his news conference touting his administration’s diplomatic endeavors in every area but North Korea — talking first about India and Pakistan and Venezuela.

Shortly before Trump took questions, the White House said no deal was struck between the two leaders.

“No agreement was reached at this time, but their respective teams look forward to meeting in the future,” press secretary Sarah Sanders wrote in a statement.

The two leaders departed the Metropole Hotel, where the talks unfolded, around 1:30 p.m. local time, roughly four-and-a-half hours after the talks began.

They left without participating in a working lunch and joint agreement signing ceremony that had been originally listed on the schedule.

Aside from the signing ceremony, a planned lunch between the two leaders did not go forward. Instead, the White House said Trump would convene a news conference two hours earlier than planned.

US and North Korean negotiators had been in Hanoi drafting language of a joint agreement ahead of the talks. Stephen Biegun, the President’s North Korea envoy, arrived days before Trump to seal the document.

Earlier in the day, Trump tamped down expectations he would make significant progress with Kim during their talks in Hanoi, repeating he’s in no rush to strike a deal even as North Korea continues to advance its nuclear weapons program.

During an expanded session with aides, the two men discussed the prospect of opening a US office in Pyongyang, North Korea’s capital. Kim said he would welcome the idea, and Trump deemed it a “good idea.”

Yet afterward, it appeared the chances for that — along with any other concessions or agreements — were dashed, even as the White House insisted the talks were productive.

Still, signs of concrete progress toward a nuclear agreement were slow to emerge as the summit unfolded.

In extraordinary back-and-forth exchanges with journalists, Kim insisted he was open to denuclearization, though didn’t say what he believed that meant.

“If I’m not willing to do that I won’t be here right now,” he said through an interpreter.

Trump had previously downplayed what might come out of his Hanoi talks, suggesting instead a long-term agreement was still to come.

Kim, for his part, also expressed cautious optimism a deal would eventually be struck. But he did not suggest such an accord would come soon.

“It’s too early to say,” he said, in an unprecedented response to a foreign journalist’s shouted question. “From what I feel right now, I do have a feeling that good results will come out.”

He again responded to journalists later in the day, albeit somewhat begrudgingly.

The two leaders went back-and-forth over the prospect of exchanging liaison officers — a low level diplomatic partnership — after the issue was raised by a journalist.

Initially, Kim seemed to reject the question, proposing to Trump that the media be excused from the room. But Trump seemed to goad him to answer, saying it was a good question.

“I would like to hear that answer,” Trump said.

Kim responded through his interpreter, saying it would be something that was “welcome-able.”

Kim added it would be better for Trump and him to discuss it together in private.

Trump was pursuing two objectives as he sits down once again with the North Korean dictator here on Thursday: draw North Korea closer to the prospect of abandoning its nuclear weapons and regain control of the media narrative.

Neither has proven easy.

As he arrived at the swanky Metropole Hotel on Wednesday to advance his historic direct diplomacy with Kim, Trump was quickly upstaged by the damning congressional testimony of his longtime former attorney and adviser Michael Cohen. By the time Trump finished dinner with Kim, the airwaves were blanketed with coverage of Cohen’s testimony before the House Oversight Committee.

A grand agreement on denuclearization might have helped in that effort. But Trump repeatedly downplayed the prospects of a deal emerging from the Hanoi talks. Instead, he suggested something more vague might result from his second summit with Kim.

“I can’t speak for today but over a little bit longer term … we’re going to have a fantastic success,” Trump said.

He described his dinner an evening earlier as positive, but did not describe in detail any of the negotiations underway.

“A lot of great ideas being thrown about,” Trump said.

Cozy relationship with a brutal dictator

Following an intimate Wednesday evening dinner, the two leaders once again put their chummy personal relationship on display on Thursday. Walking along the flower-lined pool deck at the French-colonial Metropole hotel, Kim and Trump engaged in friendly conversation to give the cameras an opportunity to capture them in a more casual setting.

The images will only serve to fuel criticism that Trump’s cozy diplomacy with Kim glosses over the rampant human rights abuses in North Korea, which include Kim’s brutal assassinations of those who cross him and the imprisonment of thousands in labor camps. Trump has avoided any mention of human rights during his talks with Kim, instead focusing on the prospects for financial investment if Kim agrees to abandon his nuclear weapons.

While Trump continues to insist that there is no rush to make progress, North Korea has continued to develop its nuclear weapons program and expanded its nuclear arsenal. In just the past year, North Korea is estimated to have produced enough fissile material for an additional five to seven nuclear weapons, according to Stanford University’s Center for International Security and Cooperation.

As Trump awoke in Hanoi, the Wednesday evening US prime-time newscasts continued to pick through the unsparing allegations Cohen had leveled against Trump.

During his seven hours of testimony, Cohen accused Trump of being a “racist,” a “conman” and a “cheat.” He claimed that Trump was aware during the 2016 campaign of his longtime political adviser Roger Stone’s communications with WikilLeaks about the release of hacked Democratic emails. And once again — this time before the cameras — he implicated Trump in federal crimes.

Trump seeks to refocus attention on his high-stakes diplomatic gambit with North Korea, even though it’s Cohen’s testimony that will surely be a focus of questioning during a news conference later on Thursday.

The US President is under pressure to demonstrate progress in his efforts to coax Kim into abandoning his nuclear weapons program, but he did little to counter the low expectations about the results of the second summit.

“I thought the first summit was a great success, and I think hopefully this one will be equal or greater,” Trump said during his first Hanoi encounter with Kim, even as he acknowledged that “some people would like to see things go quicker.”

Despite broad pledges to denuclearize, North Korea has not taken any concrete and verifiable steps in the eight months since Trump and Kim first sat down in Singapore. And US officials signaled in the days before this summit that the joint agreement Trump and Kim are set to sign in Hanoi will not represent a dramatic breakthrough, instead aiming to lay yet more groundwork for a path forward. And they worried that Trump might make surprise concessions to Kim in his eagerness to reach a deal.

Those concerns could now be compounded by the focus on Cohen’s testimony and Trump’s eagerness to move past this news cycle.

Trump was clearly distracted by the Cohen testimony on Wednesday, tweeting during a break in meetings to slam his longtime top former aide as a lying, unreliable witness.

“Michael Cohen was one of many lawyers who represented me (unfortunately). He had other clients also. He was just disbarred by the State Supreme Court for lying & fraud. He did bad things unrelated to Trump. He is lying in order to reduce his prison time. Using Crooked’s lawyer!” Trump tweeted, falsely claiming Cohen’s testimony before Congress would help reduce his prison time.