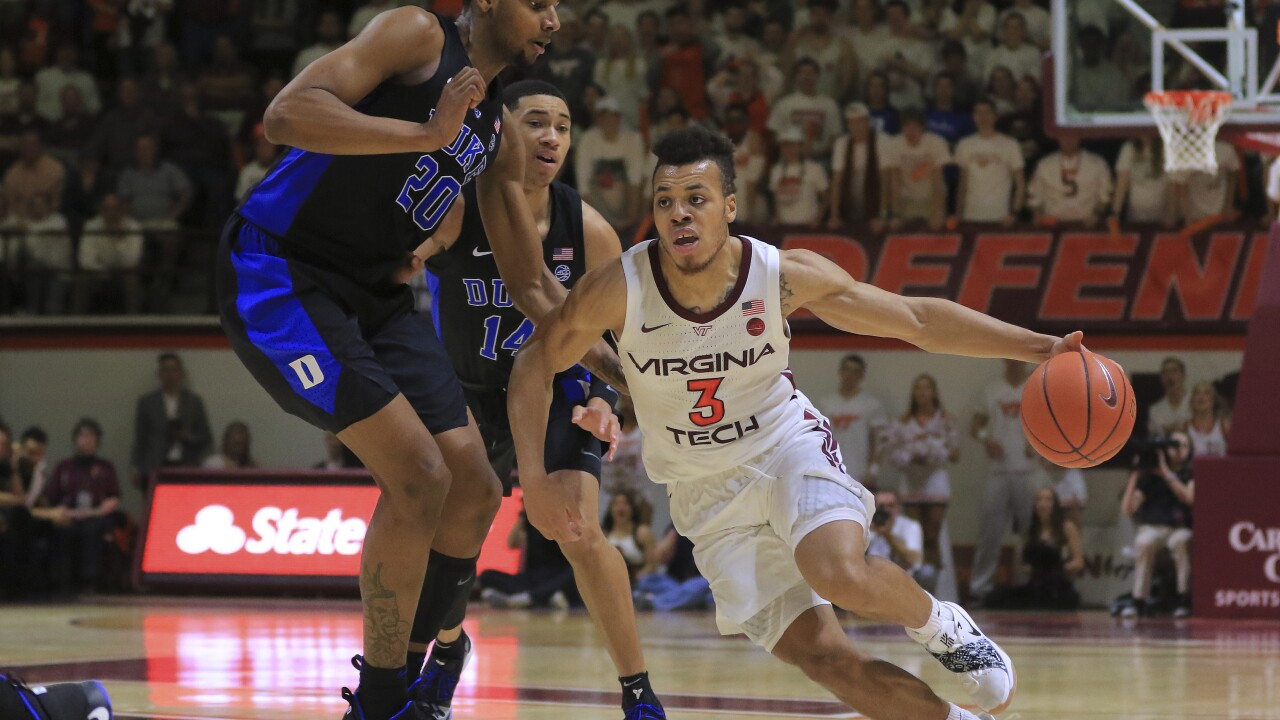 BLACKSBURG, Va. (HokieSports.com) – Kerry Blackshear Jr. continued his stellar play of late, scoring 23 points to lead No. 20 Virginia Tech to a 77-72 upset of No. 3 Duke in an ACC game played at Carilion Clinic Court on Tuesday night.

Tech, which knocked off Duke 64-63 a year ago at Carilion Clinic Court, beat Duke in back-to-back games for the first time since 1921. The victory also marked the third straight time that the Hokies have beaten the Blue Devils when Duke was ranked in top five of The Associated Press poll.

Tech led for much of the game, including much of the second half, but the Blue Devils used a 9-2 run, tying the game at 70 on a dunk by Marques Bolden with 1:51 remaining. The Hokies, though, answered when Ty Outlaw canned a 3-pointer from the corner with 1:28 to go, giving Tech a 73-70 lead.

Tre Jones scored for the Blue Devils with 12.6 seconds to go to cut the lead to 75-72, but Blackshear hit two free throws with 11.4 seconds left to give Tech a five-point advantage. Reddish then missed a 3-pointer, and Blackshear retrieved the rebound to seal the win.

Hill scored 17 points for the Hokies, who shot 46 percent and committed just six turnovers. Alexander-Walker added 13 and Outlaw had 11.

QUOTES TO NOTE
Virginia Tech head coach Buzz Williams
(On taking advantage of free-throw opportunities)
“I thought we did a really good job in the second half of hurrying up and getting to the bonus, and I thought once we got to the double bonus, which may have been the quickest to the double bonus in ACC play, I thought that was really important. And I think that our turnover rate in the second half was much lower, so again, the combination of those two things helped us.”

(On what the team has accomplished without Justin Robinson in the lineup) The hard way is the right way, and the right way is the hard way. When you grow up in the country, there’s not a paved road. It’s dirt, so you figure it out. What I’ve tried to make sure of throughout all of this is to not overly give attention to 5 [Robinson]. But I do think that 5’s jersey will be retired – 111 years of Virginia Tech basketball, and he’s the all-time assist leader. At some point, I think his jersey will be in the rafters. But I think I would be doing a disservice to the mothers and fathers of the seven that have suited up this month – and it turned into eight. I would be doing a disservice to their parents if I didn’t make sure our program was giving our best effort to the ones that did put on a uniform. Doesn’t mean we don’t love 5 less, but it doesn’t mean that we love the guys that are playing more. So I’ve tried to be overly cautious with what I say publicly and I’ve been more overly cautious with what I’ve said to our team because I think it’s human nature to have some form of justification. There is no justification. There is a lot of people that have a lot of grind every day that have nothing to do with sport, and they wake up every morning before the sun comes up and they figure out how to pay the light bill.”

GAME NOTES
• Justin Robinson missed his eighth straight game because of a foot injury. The Hokies are 5-3 in his absence.

• Blackshear scored in double figures for the eighth straight and has scored at least 20 points in four straight and five of the past seven games.

• Blackshear’s double-double marked his seventh of the season and the 11th of his career.

• Blackshear scored in double figures in every game in February.

• Outlaw hit three of the Hokies’ eight 3-pointers and has hit at least three 3-pointers in 12 games this season.

UP NEXT
The Hokies return to action Tuesday when they take on Florida State in Tallahassee, Florida – a place where they haven’t won since 1989. The tipoff is slated for 7 p.m.