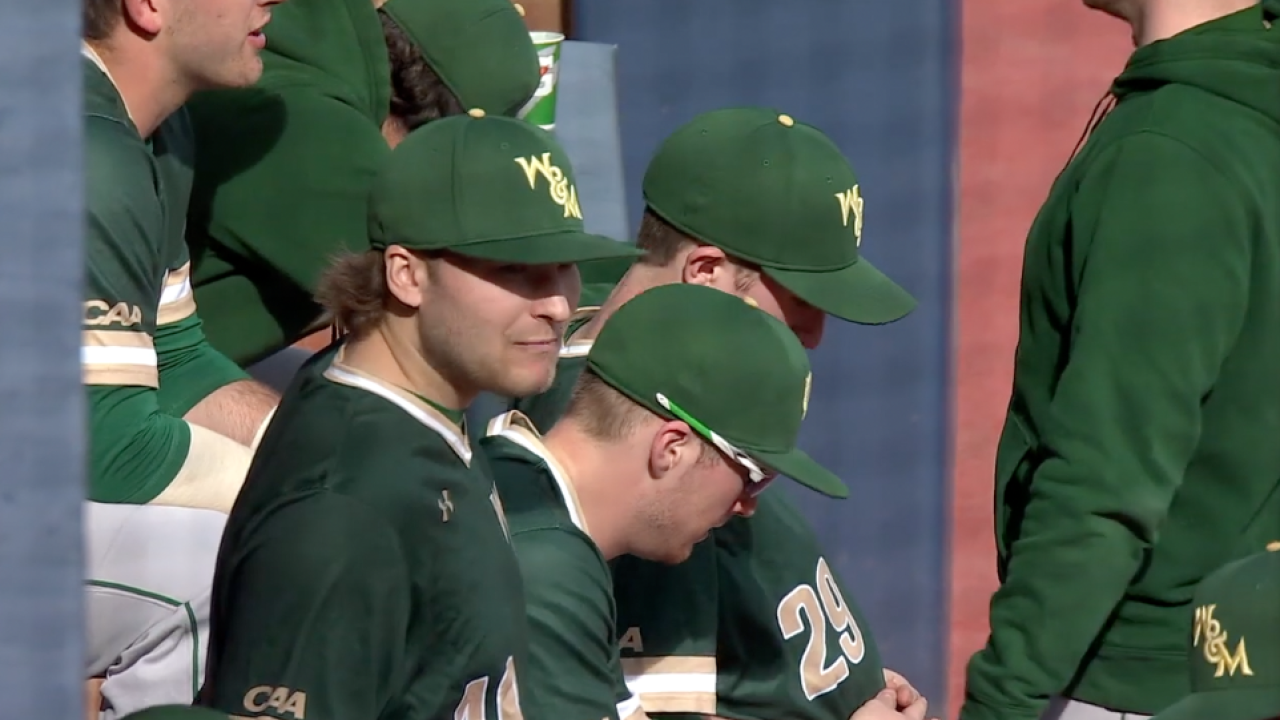 The Tribe trailed by two runs, before using a four-run rally in the top of the third to erase the early deficit. With the bases loaded, junior Brandon Raquet platted a run behind the second hit by pitch of the inning. A RBI single from both senior Zach Pearson and sophomore Matt McDermott continued the rally. On the next at bat, sophomore David Hogarth granted the Tribe a 5-3 lead on a sacrifice fly.

The Green and Gold sent eight batters to the plate for a three-run burst in the fourth inning. The Tribe loaded the bases again, this time with two outs. A UVA fielding error then pushed across a pair of unearned runs. On the next at bat, McDermott landed a RBI double in right center, providing an 8-3 advantage.

W&M manufactured its ninth run in the top of the sixth. After the first out, Raquet sent a double down the left line. Pearson then followed up with a single and Raquet would score due to a UVA error in the outfield.

Freshman Zach Tsakounis (2-0) was spectacular for the Tribe. He twirled 6.1 innings of one-run ball with six strikeouts out of the bullpen. Sophomore Randy Prosperi and redshirt junior Chris Farrell recorded the last five outs.

UVA’s Evan Sperling (0-1) was dealt the loss after surrendering five runs in 2.1 innings.

Tribe Standouts
The bottom half of the lineup provided majority of the production for the Tribe. Batters six-nine were responsible for all six RBI and seven hits. McDermott headlined the Tribe offense after finishing 4-for-5 with three RBI and a double. Rookie Hunter Hart also enjoyed a banner effort of three hits, a double and three runs scored. Pearson belted two hits and drove in a run, while Raquet posted a double, RBI and two walks.

Notes
The Tribe defeated Virginia for the first time since the miraculous 2016 postseason run that led to a NCAA Regional Final Appearance … It was the largest margin of victory over UVA since 2010, which resulted in the same final … … Tsakounis tallied a season-high seven strikeouts in the second appearance of his career … McDermott recorded a new career-best in hits (4) … Hart posted a season-high of three base hits … Raquet, Smith and Pearson each extended their on-base streak to six-consecutive games.

Up Next
The Tribe remains on the road with a three-game series this weekend at High Point. The three-game set opens on Friday, March 1 at 4 pm, resumes on Saturday, March 2 at 2 pm and wraps up on Sunday, March 3 at 1 pm.