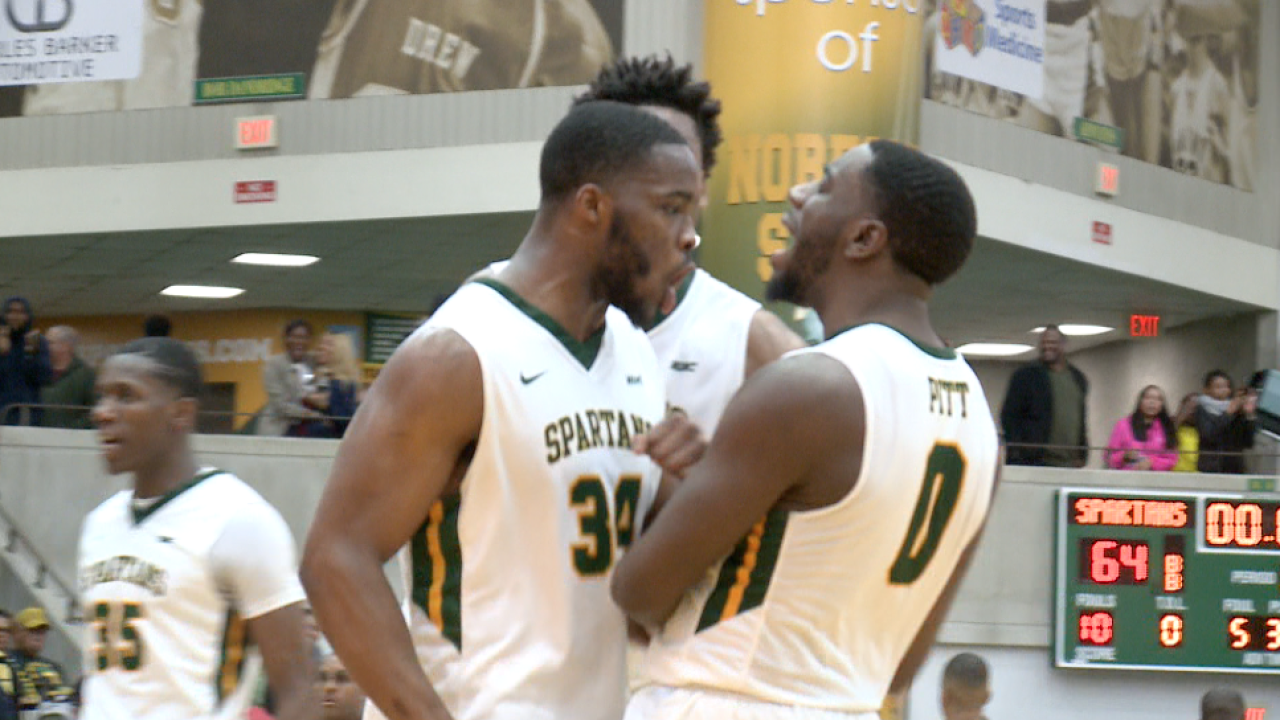 BALTIMORE, Md. (NSUSpartans.com) – Morgan State gave the Spartans all they could handle, but a last-second shot by the Bears did not fall as the Norfolk State men’s basketball team held on for a 75-74 win on Saturday afternoon at the Talmadge Hill Field House.

Morgan State’s Stanley Davis missed a driving six-foot jumper with time running out as NSU held on for the victory. The Bears also missed a layup with 21 seconds left and failed to complete a 3-point play with 8.9 to go in a game of missed chances.

The Spartans missed a pair of free throws up by one with 6.9 seconds left to give the Bears one last shot. That came after the Bears had eliminated an eight-point deficit with six and a half minutes left in the game.

MSU led by three with three minutes remaining and was still up with less than a minute remaining before senior Alex Long and junior Nic Thomas each knocked down a pair of shots from the foul line. Isaiah Burke’s layup with 8.9 left got the Bears to within the final one-point margin.

The win improved NSU’s record to 12-1 in the league and 17-11 overall. It guaranteed the Spartans a non-losing overall record for the seventh time in the last eight years. They also remained two games ahead of second-place North Carolina A&T (10-3) for the regular season title with three games to go.

Sophomore Mastadi Pitt led the Spartans with 21 points on 8-of-11 shooting, 3-of-5 from deep. He was one of four players in double figures for NSU.

The Spartans led by four at the half and only by as much as six in those first 20 minutes of play despite shooting 59 percent. Pitt had 13 at the break, and then two more buckets early in the second half as the Spartans pushed ahead by seven, 52-45.

The Bears scored the next eight points for a one-point lead, but a couple of buckets by senior Jordan Butler and an alley-oop dunk from Long gave the Spartans a six-point advantage with nine minutes to go.

Thomas made a pair from the line for a 66-58 lead with 6:45 to go. But after Jamerson made two from the charity stripe for a seven-point edge less than a minute later, the Bears scored 10 straight over the next three minutes for a 71-68 advantage.

Pitt made a layup and went 1-of-2 from the line to tie the score, but the Bears also had a 1-of-2 effort for a one-point lead with 1:54 on the clock. Long got fouled on his putback attempt with 45.4 to go. He made both, and Davis missed the first of his two shots in the last minute of play as NSU held on.

Long totaled 10 points, eight rebounds, three assists and two blocks. Butler made 6-of-8 from the field for 16 points with five rebounds, two assists, two blocks and two steals. Thomas ended his afternoon with 14 points as well.

The Spartans had an early 12-6 lead at the start of the game after knocking down a trio of shots from beyond the arc. The Bears cut the NSU lead down to one and then went up 22-19 with a little more than 10 minutes to go after a trey from Martez Cameron.

Buckets by freshman Joe Bryant Jr. and Pitt, followed by treys from Pitt and senior Armani Branch, gave the Spartans a 36-31 advantage with 5:15 left in the half. The Bears were within one two minutes later after three free throws from Victor Rawls, but Pitt had two more buckets to put the Spartans ahead at the break, 45-41.

Rawls had 13 points for MSU, while Davis added 13 points and 12 rebounds. David Syfax also finished with a double-double of 12 points and 10 boards, although NSU held the rebounding edge, 40-31.

NSU held a 34-18 advantage in points in the paint, while Morgan State turned 16 Spartan giveaways into a 20-13 edge in points off turnovers.

The Spartans return home to host Coppin State next Saturday at 6:30 p.m.