Open and unfussy, this glass chalet is a skier’s dream 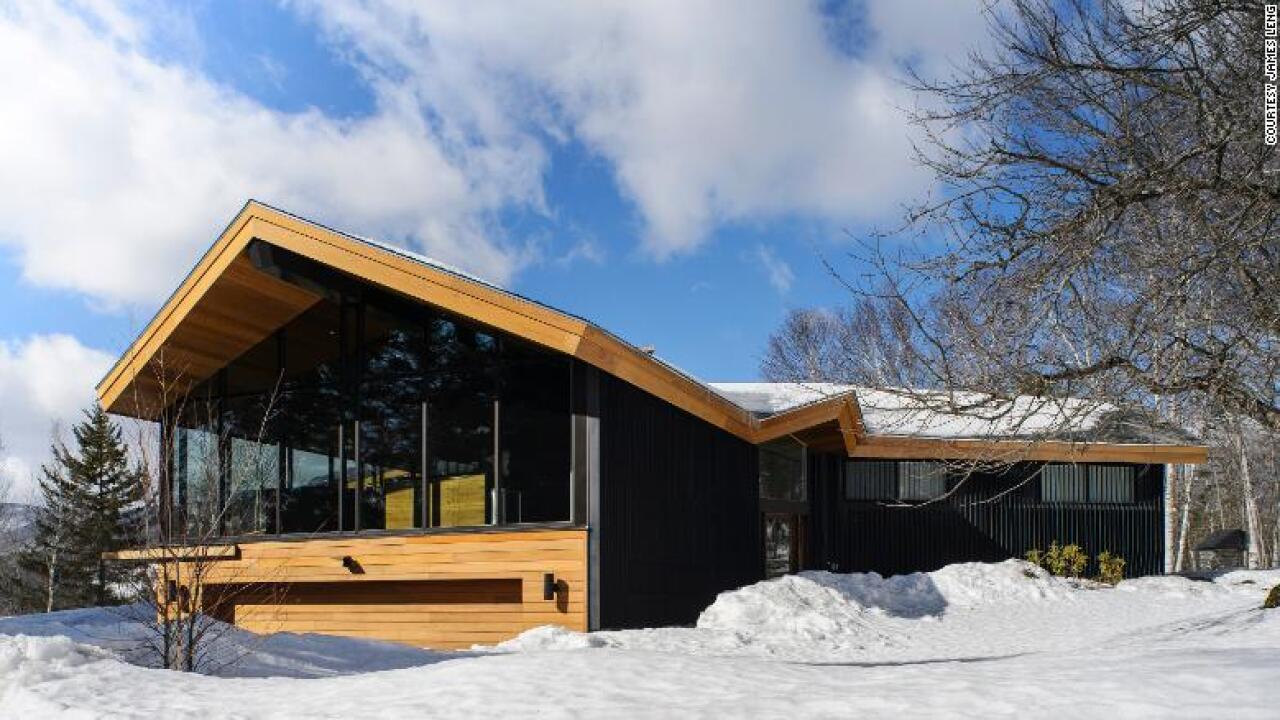 This modern ski house in Stowe was rebuilt on the foundation of a 1978 home. (CNN)

Any place with a warm fire is a welcome respite after a day on the slopes. But for those with modern taste, the typical ski house — with its chunky lines and a lot of dark wood — can feel closed-in.

Architect Jeremy Jih set out to design a ski house that brought the outside in, without the cold. His modern glass-walled chalet in Stowe, Vermont, offers a cinematic view of the slopes and creates an open and unfussy space that still feels cozy.

The 5,000 square-foot, five-bedroom ski home is owned by Jih’s partner Jeff Merselis, a health care executive based in Boston.

“A lot of traditional ski houses are log-cabin-like with lots of dark wood and heavy, big furniture,” says Merselis. “I wanted something much more light. There is nothing inside the house that competes with the amazing views outside.”

A view framed by wood and stone

For Merselis, who bought the house for $420,000 and spent $1.2 million rebuilding it, the main goal was to make the house modern but warm, and to keep the view front and center.

“We wanted it to be a beautiful modern cabin that would be this spectacular view framed by wood and stone,” says Jih.

The couple, who began dating just before Merselis bought the house, focused on the exterior and chose glass that was well insulated and efficient.

Jih designed the roof lines so that the overhanging eaves would block direct sunlight in the summer, but in the winter, when the sun is lower in the sky, would allow the rays to strike the polished black concrete floor directly, warming it up and allowing for more efficient, passive heating. This is in addition to a radiant heat floor.

This modern ski house in Stowe was rebuilt on the foundation of a 1978 home. (CNN)

“The first thing many people assume is that it will be drafty and expensive to heat,” says Jih, “but the heating bill amounts to about $300 a month for a 5,000 square-foot house.”

Merselis had been searching for a ski house in the Stowe area for nearly a decade.

The existing house he bought — a 1978 home Jih described as “Austrian chalet comes to the American suburbs” — was in disrepair. The pipes had burst, resulting in mold, among other maladies.

But there were possibilities. When Merselis came to look at it, he was delighted to find that overgrowth was obstructing what he knew to be an incredible view of Mount Mansfield, the highest mountain in Vermont.

It was the bones of the house — and specifically its stones — that got Jih’s attention, though. “I immediately told him that he had to buy this one,” Jih says. “Mostly because of this beautiful, bluestone, three-sided hearth that we rebuilt the house around.”

The hearth, which is 13-feet high and 10-feet wide on each side, stayed, and the house was rebuilt from the ground up on the three-winged footprint. Six sides feature double-insulated commercial-grade curtain-wall glass in the common areas. The other sides have ample windows, with vertical, 1/8th-inch thick, aluminum louvers on the exterior to provide privacy for the bedrooms.

The three-sided hearth and the foundation were all that remains of the original house. (CNN)

Jih incorporated a trefoil, or clover-shaped path, around the hearth, with the house’s wings extending toward three different landscapes: jutting out over the mountain, into an orchard, and overlooking a swimming pool.

Jih had skied exactly once when he was commissioned to design the house. But Merselis was skiing before he could walk.

“I wanted it to be a ski house that wasn’t fussy, would accommodate large groups of people, was really low-maintenance, a place that would handle skiers and dogs and muddy hiking boots.”

The ski lockers are made out of sapele wood and brass. (CNN)

Having direct access from the garage into a ski locker area was important because there’s so much gear you want to keep together and you don’t want to track snow and mud throughout the house, says Merselis.

Jih built five side-lit sapele and brass ski lockers with a place for boots, a shelf for gloves, a hook for a coat, space for skis and a top shelf for a hat or helmet.

They also intentionally placed a bigger space priority on the common areas. “There’s much larger public spaces in the house, which I think is important for a ski house as well, so people can congregate in the kitchen and living room area, but have their private times in the bedrooms, which tend to be much smaller spaces.”

The sauna opens to a wall etched with ski trails that doubles as a wine rack. (CNN)

One of the most notable design features is the sauna. The glass-enclosed sauna has a view of a sculpted block of acrylic etched with a map of the ski trails on Mount Mansfield. Each grid junction on the map doubles as an opening to rack a bottle of wine.

“The idea was that after you come back from a day of skiing, you want to warm up in the sauna, look at the trails that you’ve just skied, and pick out a bottle of wine for dinner,” says Jih.