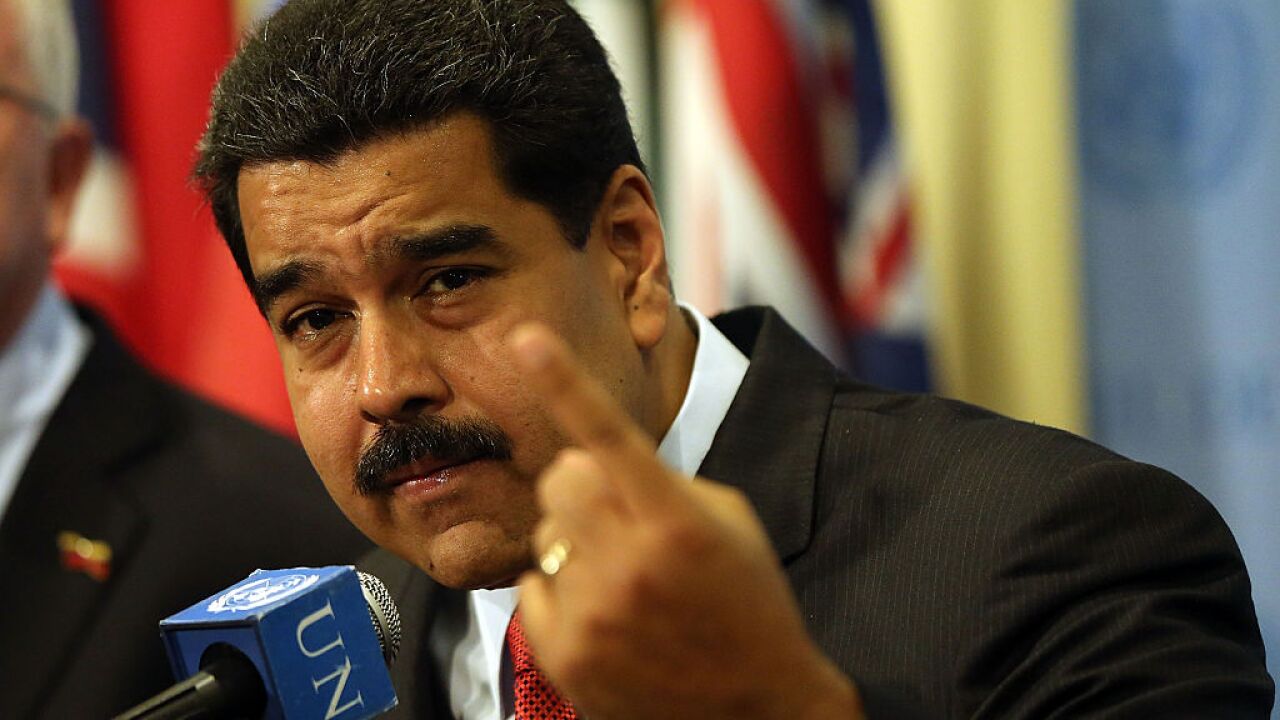 NEW YORK, NY – JULY 28: Venezuelan President Nicolas Maduro speaks to the media following a meeting with UN chief Ban Ki-moon at the United Nations (UN) headquarters in New York on July 28, 2015 in New York City. Maduro is in New York to speak with the UN about his country’s escalating border dispute with Guyana. (Photo by Spencer Platt/Getty Images)

As the US continues to work to bolster the administration of self-declared interim Venezuelan President Juan Guaido — including using US military aircraft to deliver humanitarian aid — a senior administration official says the US would be willing to meet with Nicolas Maduro to negotiate his exit.

NEW YORK, NY – JULY 28: Venezuelan President Nicolas Maduro speaks to the media following a meeting with UN chief Ban Ki-moon at the United Nations (UN) headquarters in New York on July 28, 2015 in New York City. Maduro is in New York to speak with the UN about his country’s escalating border dispute with Guyana. (Photo by Spencer Platt/Getty Images)

Maduro reportedly extended an invitation to the US special envoy on Venezuela, Elliott Abrams, to meet with him. The State Department and Secretary of State would not comment on the prospect of such a meeting, but Mike Pompeo said Friday that the overture shows Maduro’s “increasing understanding that the Venezuelan people are rejecting him.”

Adding to the pressure campaign against the Maduro regime, the US Treasury Department announced sanctions against five individuals who are, as described by Secretary Steven Mnuchin, “in charge of Maduro’s security and intelligence apparatus, which has systematically violated human rights and suppressed democracy, including through torture and other brutal use of force.”

Meanwhile, three defense officials tell CNN that US military aircraft will help ferry humanitarian aid to countries neighboring Venezuela in the hopes that the aid might be delivered to the Guaido administration.

US Air Force C-17 aircraft will support the US State Department and the US Agency for International development, flying the aid from the continental United States to Colombia.

While the Trump administration has repeatedly refused to rule out a military option to end the Venezuelan crisis, officials stress that the US military will only be transporting the aid to the region, adding that the flights could take place as early as this weekend. Pompeo noted Friday that the US would continue to deliver “massive humanitarian assistance” “as soon as this weekend.”

While the initial military flights are expected to go to Cucuta, Colombia, a senior USAID official said Wednesday that the US could fly aid directly into Venezuela.

The Acting Assistant Administrator for USAID’s Latin America and Caribbean Bureau, Steve Olive said they are in daily communication with self-declared interim President Juan Guaido and his team on avenues to deliver humanitarian aid to Venezuela.

“We are also committed to pre-positioning goods and supplies in other parts if that’s necessary,” Olive said. “We also are looking at scenarios of flying things in if the situation permits.”

Olive said the Maduro is not allowing access, but that they hoped to “change that scenario shortly.”

On Friday, Lt. Col. Jamie Davis confirmed that the US pre-positioned supplies “including food, hygiene kits, and medical supplies” last week and would “continue to coordinate with President Guaidó and his team of experts, governments in the region, and our humanitarian partners to mobilize aid for the Venezuelan people.”

Guaido told a large group of anti-regime protesters in Caracas Tuesday that humanitarian aid will enter Venezuela by February 23, calling on all Venezuelans to help hand out the supplies.

Venezuela’s opposition envoy to the United States, Carlos Vecchio, accused Maduro’s government on Thursday of blocking humanitarian aid and manipulating the suffering of the people.

“The pain of our people is being manipulated and they don’t care how much our people are suffering,” Vecchio said while speaking at an international aid conference hosted at the Organization of American States (OAS) headquarters in Washington.

When two US trucks carrying food and medical supplies arrived at Venezuela’s border last week, they found the bridge to Venezuela blocked by an oil tanker and two large containers, according to a US official in the Colombian border town of Cucuta.

In addition to Colombia, the government of the Netherlands announced Wednesday that the Caribbean island of Curaçao would also be used as a “hub” to facilitate the delivery of humanitarian aid bound for Venezuela “in close coordination” with Guaido and the US. Both the US and Dutch militaries have used facilities on Curaçao.

The announcement came just a day before the island was visited by Adm. Craig Faller, the head of US Southern Command which oversees military operations in South America.

A spokesperson for Southern Command described the visit as long planned and said “there was no connection between the Admiral’s visit and the Dutch announcement.”

The US, Canada and a majority of South American and Western European countries have recognized Guaido as the country’s interim president. Russia, China and Cuba continue to recognize the government of Maduro, who retains control over the country’s security forces.