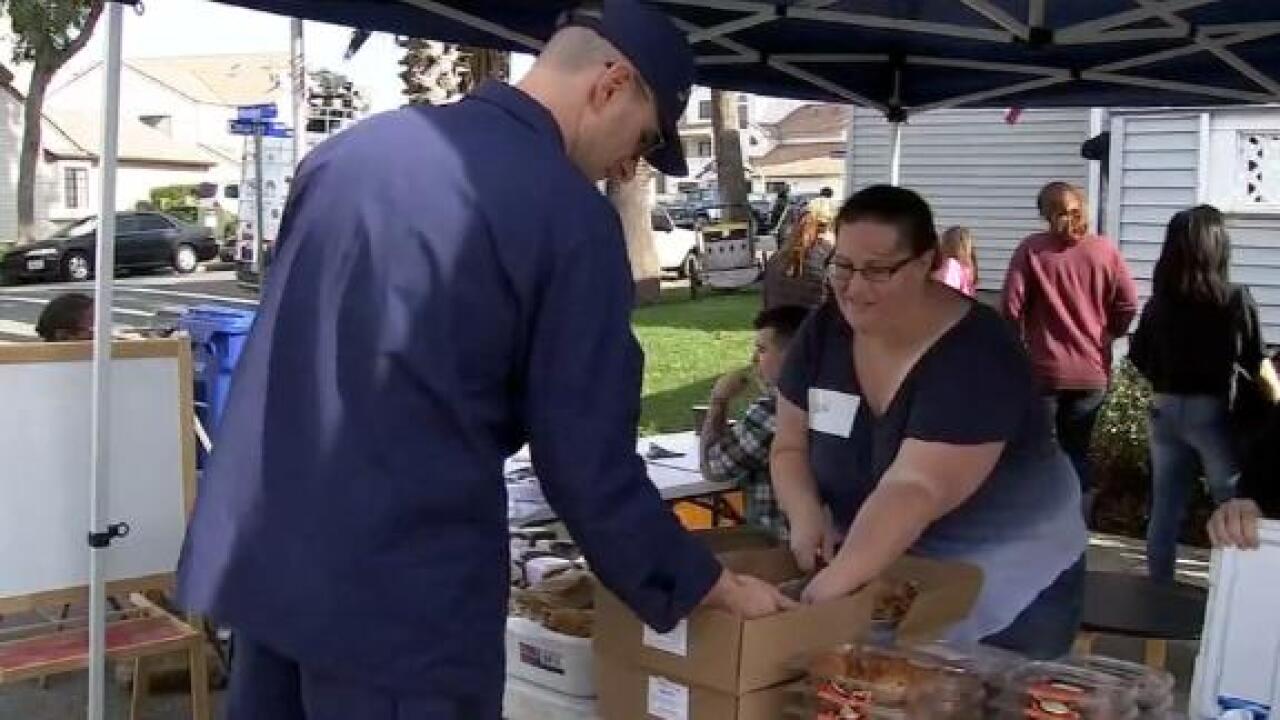 “I have stood watch when the Coast Guard didn’t have the budget to buy toilet paper,” Amanda Morales, a Coast Guard veteran, tells me. “We had to bring our own from home.”

Doing more with less is something Coasties, as they call themselves, simultaneously celebrate and bemoan.

Their motto is “Semper Paratus,” Latin for “Always Ready,” though they joke that their motto is actually “Semper Gumby” — “Always Flexible.”

But when the longest government shutdown in history left the Coast Guard as the sole military branch without a paycheck last month, it pushed many families to their breaking points.

Even as President Donald Trump considers signing a bipartisan border security proposal that would keep the Coast Guard running after Friday, the community fully expects they’ll be staring down another funding lapse in the future.

After all, this latest shutdown drama was the fourth threat to the Coast Guard’s livelihood since the beginning of 2018.

“We are a branch of the military. You would be surprised how many people don’t know that,” says Amanda Gibbs, whose husband has served for four years as an information technology specialist. The couple has five children.

The Coast Guard evokes images of search and rescue operations, maybe during Hurricane Katrina, or guys jumping out of helicopters wearing snorkels and fins — and that’s accurate, but only part of the picture.

The Coast Guard has a myriad of other roles: seizing drugs from smugglers, intercepting pirates, inspecting ships in ports, stopping illegal fishing in domestic and international waters and augmenting the US Navy during wartime, as well as all of the support staff it takes to pull off these wide ranging missions. And some of those rescue swimmers dangling from helicopters are now women.

Guardsmen can be at sea, or “under way,” for months at a time, often with very limited communication with their families. Many of the cutters in the fleet are old and have limited telephone capabilities.

Coast Guardsmen (as they’re called whether they’re women or men) are deployed all over the world and have fought and died in every war since 1790, when Alexander Hamilton created this seafaring force.

The work is risky. Their families worry that they might not come home.

Stacey Benson has been a Coast Guard spouse for 13 years, since her husband left the Army. Her husband, a chief petty officer, is a maritime law enforcement officer stationed in Astoria, Oregon.

“When he deploys, his main job is to board vessels. He’s looking for drugs. He’s the first person on the boat (most) of the time. People driving the vessels may have guns or knives,” she says. “You don’t know if they’re going to come home.”

“When a tanker went down during a hurricane, my husband’s ship was right there. I was sick with worry because they went into danger themselves to try to save others,” says Jessica Manfre, who lives in Cape May, New Jersey. Her husband is a senior chief petty office and has been in the Coast Guard for 18 years.

“There’s times I would pick him up from a long deployment and we’d be met with a Drug Enforcement Agency team at the pier, handcuffed drug dealers being escorted off as they caught them trying to bring in cocaine into our country.”

The Coast Guard community, like other branches, is incredibly proud of its service.

“I’ve taken part in saving almost 1,500 lives,” says Amanda Morales, who was first stationed on remote Kodiak Island in Alaska, serving as an operations specialist, answering distress calls from civilians on the water and monitoring rescue crews. “There aren’t that many jobs out there that can give you that job satisfaction.”

“They selflessly risk their lives to make sure others have a chance at survival,” says Mary Nelson, a spouse living in Jacksonville, Florida. Her eldest son is also in the Coast Guard. “They ensure the safety of complete strangers on a daily basis. What wife or mother wouldn’t be proud knowing their husband or son is a true hero, day to day?”

With only 42,000 active duty members, the Coast Guard is not even a fourth the size of the next smallest branch, the Marines.

Their budget is miniscule compared to the Army or Navy. And because the Coast Guard performs some domestic law enforcement functions, including boarding vessels in the US to inspect for and seize illicit drugs, it is funded by the Department of Homeland Security. Funding for DHS has been hung up repeatedly in Congress.

The Army, Navy and Marine Corps, housed under the Department of Defense, are guaranteed pay in the event of a government shutdown. The Coast Guard is not.

“We don’t get the recognition I feel the service deserves,” Morales says. “We joke that we are the redheaded stepchild.”

“We lost so much sleep,” Nelson says, anxiously eyeing the next potential lapse in funding this Friday. “We also own a home at our previous duty station and our tenants are active duty Coast Guard as well, so the panic of needing to cover two mortgages with zero paycheck coming in was very real for us.”

As members of the military, Coast Guardsmen are prohibited from wading into politics. Spouses, almost all women, have taken up the mantle of raising awareness about the financial strife caused by the shutdown.

Though Morales left the Coast Guard, her husband is still on active duty and the couple has a 6-month-old daughter. She fires off stories of what families did to get by. She knows one career service member with a college education who took a second job delivering pizzas.

Morale among service members, according to these spouses, plummeted as they worried about feeding their families — even as the Coast Guard, unpaid, broke ice to allow commerce on the Great Lakes, conducted rescues, seized millions of dollars in drugs, intercepted illegal migrants and responded to chemical spills.

“If you can imagine, we have five children and my husband is our sole provider,” says Gibbs, which is common in the Coast Guard as one parent shoulders responsibility for the children while the other is deployed or at sea. Coast Guard spouses, like those in other branches, often struggle to find gainful employment while moving every few years.

“My husband felt like he wasn’t providing for us. His morale was rock bottom.”

Gibbs’ husband has only been in the Coast Guard for four years, joining relatively late at the age of 31. His monthly income is $2,000, she shares, noting that the pay scale for service members is public, and that it’s important Americans realize that some members of the armed forces are living below the poverty line.

“They still had to risk their lives for the rest of the nation on a daily basis and not even know how they’d be putting food in the mouths of their own family at the end of that same day,” said Mary Nelson.

Stacey Benson organized a food bank in Astoria, serving, by her careful count, a total of 2,347 people in the two weekends it was open. That included furloughed federal workers as well as active duty and retired Coast Guard members.

Amanda Morales crowdfunded $25,000 for the relief organization that serves the Coast Guard community.

These were the moments that brought these families a much-needed morale boost even as they watched what was happening in Washington with a mix of bewilderment and desperation. And now they’re afraid they will be affected by another shutdown.

“I want members in Washington to know that we are real people,” says Gibbs. “That we have lives. That we don’t get paid hardly anything to do what we do and to take that away from us for their own agenda is devastating.”

On Wednesday, Coast Guard spouse Michael Little, is leading an effort to pressure Congress, visiting members’ offices to deliver packages of letters from every major military and veteran service organization.

“I want to tell the government why we need to make sure the Coast Guard is paid in shutdowns going forward,” Little says.

His wife is an active-duty hospital corpsman and he is a Navy veteran, now running a consulting firm and a nonprofit called the Sea Service Family Foundation.

Recently, a bill in the Senate and a bill in the House would have continued appropriations to the Coast Guard for pay and allowances for service members, civilian employees and contractors, retired pay, and the payment of a death gratuity, funeral travel and basic allowance for housing of members of the Coast Guard dying on active duty.

In the House, the proposal hasn’t made it out of a Transportation and Infrastructure subcommittee.

In the Senate, Minority Leader Chuck Schumer (D-NY) blocked the bill, arguing it left federal workers out in the cold.

“We could do a whole lot more good by funding and opening up the government for everyone,” Schumer argued.