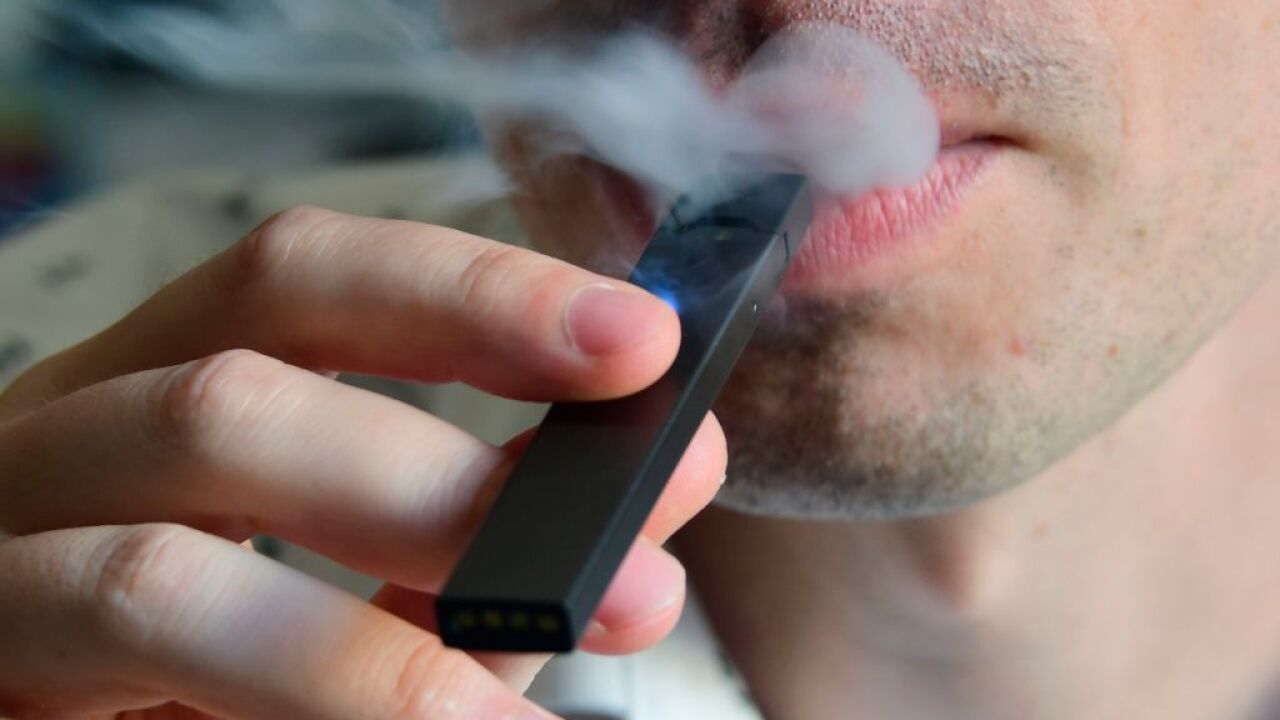 Leading e-cigarette company Juul Labs spurred a “widespread rush” of companies seeking to boost their own nicotine concentrations in order to mirror Juul’s success, according to a paper published Thursday in the BMJ journal Tobacco Control.

When Juul released its original 5% nicotine pods in the United States in 2015, the majority of competing products came in 1% to 2% concentrations, according to study author Dr. Robert Jackler, founder of Stanford Research into the Impact of Tobacco Advertising. Now, a number of competing brands reach into the 5% to 7% range.

Experts say that a single 5% pod delivers the same amount of nicotine to the body as a pack of cigarettes.

“That may be a benefit to addicted adult smokers, but it also makes it potently addictive to nicotine-naive teenagers,” Jackler said.

Juul increased its own nicotine concentrations using a patented “nicotine salt.” By combining nicotine — a bitter base in its natural form — with an organic acid, vape manufacturers can mask nicotine’s naturally unpleasant taste and create higher-concentration products, experts say.

“As a consequence of that, nicotine gets delivered to the brain very rapidly,” said Dr. Frank T. Leone, director of the Comprehensive Smoking Treatment Program at Penn Medicine. Leone was not involved with the new paper.

Leone said there are so many variations of pods, liquids and tank systems that it’s been almost “impossible to put any regulatory guardrails around these products.”

As teen vaping continues to increase, health advocates have called on the US Food and Drug Administration for more regulation — including on the high nicotine concentrations and variety of flavors these products come in.

Instead of requiring e-cigarettes to undergo FDA approval before they could be sold, the agency decided in 2017 that it would allow such products that were on the market before August 2016 to stay on shelves until 2022 without pre-market review.

The FDA said in its 2017 announcement that it is “committed to encouraging innovations that have the potential to make a notable public health difference and inform policies and efforts that will best protect kids and help smokers quit cigarettes,” thus extending the review timelines for certain products. “This action will afford the agency time to explore clear and meaningful measures to make tobacco products less toxic, appealing and addictive,” the agency said.

But some experts think the agency could do more. “FDA should … require pre-market review and authorization for any e-cigarettes that are sold,” said Lauren Lempert, a law and policy specialist for the Center for Tobacco Control Research and Education at the University of California, San Francisco.

‘The cost of nicotine addiction’ has fallen

In a statement, Juul spokeswoman Victoria Davis said the company has fought back against knockoffs and other products that it says shouldn’t be on the market.

“As part of our commitment to prevent underage use, we are taking swift and decisive action against counterfeit and infringing products,” she said. These actions include lawsuits and referring cases to law enforcement, according to a company statement last week.

She also asserted that there were products on the market in the 4% to 5% nicotine range “prior to the rise of popularity of the JUUL device.” However, Jackler said the majority of products were much lower when Juul launched, and it was indeed the popularity of Juul that sent nicotine concentrations soaring. His research group has been tracking the industry for nearly a decade.

“When Juul came out with very high-nicotine electronic cigarettes, it triggered a nicotine arms race amongst competitive companies seeking to emulate the success of Juul,” Jackler said.

Other products offering higher nicotine concentrations include e-cigarettes that resemble Juul, as well as bottles of e-liquid that allow vapers to buy in bulk. Many of these products undercut Juul’s prices, as well.

“The rush to higher and higher nicotine concentration has reduced the cost of nicotine addiction,” Jackler said.

It also comes with “a huge poisoning risk,” with some bottles lacking childproof caps and containing enough nicotine to kill an entire preschool class, he said. With the rise in e-cig popularity has come a rise in calls to poison control centers, he added.

‘I was already hooked’

Phillip Fuhrman, 15, first tried a Juul in the eighth grade. A friend offered it to him, and he “didn’t really know what it was.” Before long, it became a habit he couldn’t shake.

“I realized that I couldn’t stop,” he said. “When I started hearing all the facts and everything bad about it, it was already too late. I was already hooked onto it.”

At his peak, he estimated, he was going through a pod roughly every day and a half.

“The 5% thing, I’ve always seen since I started it — on Juul packs and everything — but I never knew what it was,” Fuhrman said. “Five percent doesn’t seem like that much, out of 100%.”

Davis said Juul decided on its signature 5% nicotine pods in order to draw to adult smokers to what the company says is a less harmful alternative. The company also offers 3% pods, but only in tobacco and mint flavors. “We continually evaluate our product portfolio to meet the needs and preferences of adult smokers who want to switch from combustible cigarettes,” she said.

In other countries, such as the UK and Israel, Juul markets 1.7% pods because regulations prohibit the concentrations sold in the United States, Davis said.

Fuhrman ultimately ditched his vaping habit and focused his sights on becoming a teen anti-vaping advocate — along with his friends and mother, Dorian Fuhrman, a co-founder of the group Parents Against Vaping e-cigarettes.

“I don’t want this to be a thing that my 7-year-old sister is going to be experiencing when she’s in seventh, eighth, ninth, 10th grade,” he said.

“I just want this to stop as soon as possible so we can stop addicting younger kids.”