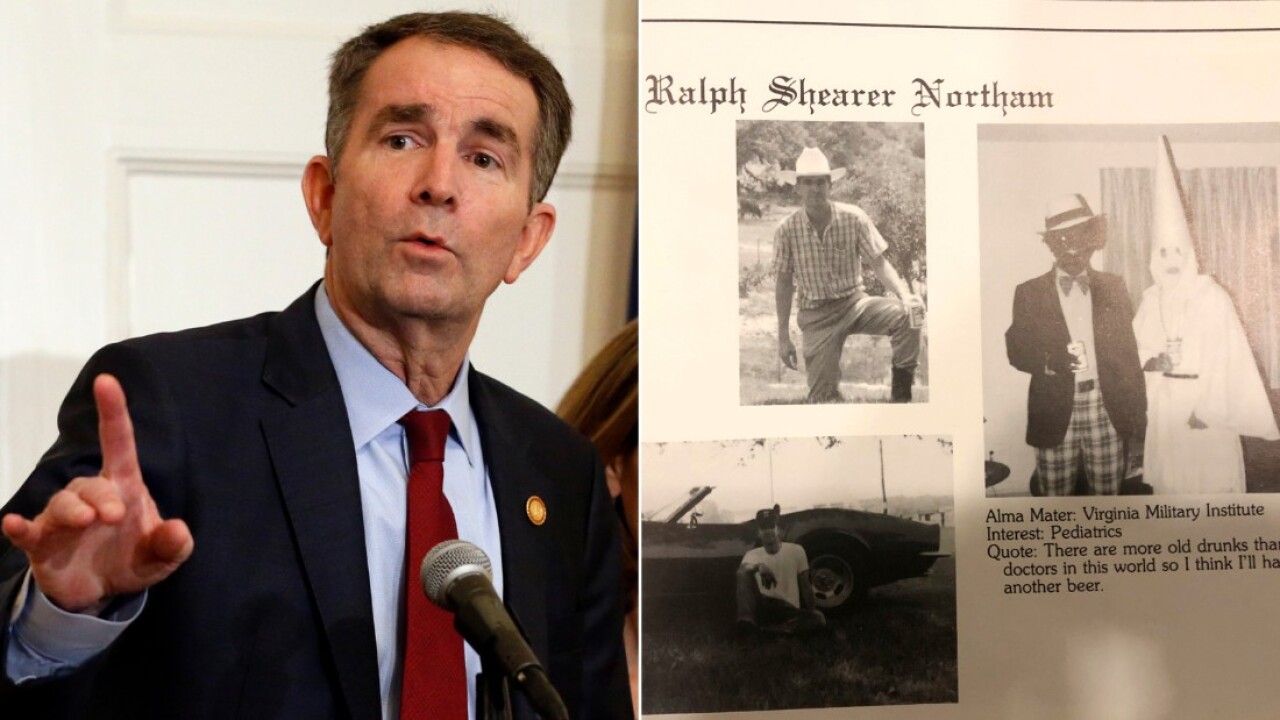 James Lunsford said he voted for Democratic Virginia Gov. Ralph Northam based on the man he thought he was. But since a decades-old racist photograph on Northam’s medial school yearbook page surfaced, Lunsford is having second thoughts.

Lunsford, an 82-year-old Richmond resident, said he was shocked, disappointed and horrified when he saw the photo of a man in blackface and another man in Ku Klux Klan garb on the governor’s page in his 1984 yearbook. But Lunsford said he was willing to give Northam a chance.

“We are a forgiving people,” Lunsford, who is black, said Monday. “I think we should forgive him. As far as the politics is concerned, I don’t know whether he should resign or not.”

Northam faces calls to resign from top Democrats in Congress and virtually every elected Republican and Democratic leader in Virginia. But in Richmond and in Norfolk, where Northam attended Eastern Virginia Medical School, some residents were split on whether he should go, and how they feel about the racist images.

While some black Virginians in the seat of what was the Confederacy have different opinions on what Northam should do, they are clear about one thing: Racism is still a real and present problem.

“He made a mistake. Everybody makes mistakes in life,” Mozelle Miller, who is African-American, said while sitting in a car in a parking lot in Richmond. “Just as long as he don’t make any more like that.”

Miller said if people were “offended by everything in this world … there would be no existence.” She was willing to “let it slide,” but said not everyone would let it go.

Northam should be allowed to stay in office as long as he can do his job “and just do right by everybody,” she said.

The governor has been under fire since the photo first surfaced on Friday. He initially apologized for the photo, saying it was him, without specifying which person he was. But on Saturday he said he wasn’t in the photograph.

“I was appalled that they appeared on my page, but I believe then and now that I am not either of the people in that photo,” he said Saturday.

He also admitted to appearing in blackface to dress up as Michael Jackson for a dance contest in San Antonio in 1984.

After the 1984 photo was released, another photo surfaced of Northam from his 1981 Virginia Military Institute college yearbook. Under the picture, it listed the racist slur “Coonman” — in quotes — as one of his nicknames.

Northam recalled that two people, who were a year ahead of him at Virginia Military Institute, “called me Coonman.”

“I don’t know their motives or intent. I know who they are. That was the extent of that, and it ended up in the yearbook. And I regret that,” Northam said Saturday.

‘He needs to hang it up’

Chinky Dolo, a Richmond resident, said he was offended by the photograph on Northam’s page. And he didn’t believe the governor’s second statement denying he appeared in the photo.

“That just seems iffy to me,” Dolo said.

Northam told his Cabinet on Monday the only way to clear his name was to remain in office and convince people he isn’t the person in the photograph and the image doesn’t represent who he is, said a source inside the regularly scheduled Cabinet meeting. If he resigns, the governor said he would be labeled as a “racist for life,” the source said.

Dolo said he was willing to hear what else the governor has to say, though he didn’t think it would affect his opinion. His mind was made up.

Lt. Gov. Justin Fairfax, the man who would replace Northam, took a more diplomatic tone when asked whether Northam should resign. He said the governor “has to make the decision that is in the best interest of the Commonwealth of Virginia.”

“I believe that I’m in a unique position, obviously, as lieutenant governor, and someone who would have to assume that office in the event that he were to resign. And so, I have to be very circumspect. I have to think about the people of the Commonwealth of Virginia,” Fairfax said.

Stuart Saunders, a 65-year-old Richmond resident, said he didn’t vote for the governor. But Saunders said it wasn’t his call to say whether the governor should resign.

“I’m just a voter,” he said. He said he wants Northam to get back to the job of governing.

“He was in college, He was a stupid kid,” said Saunders, who is white. “Think of all the dumb things people do in college that follow them for the rest of their life. I just don’t think that should happen.”

‘America has never really dealt with the question of slavery’

The Rev. Geoffrey Guns, a Norfolk pastor who has met Northam, said the governor should have resigned on Saturday. Northam campaigned at Guns’ church, Second Calvary Baptist Church, during his hotly contested gubernatorial race.

“We supported him. We can find it in our hearts to forgive and appreciate the sincerity to which he has spoken,” said the 69-year-old Guns, an Army veteran who holds a doctorate in ministry from Howard University.

Forgiveness is one thing, Guns said, but believing the governor can still lead is a different matter. Guns said he doesn’t believe Northam can still effectively govern.

“It is unconscionable that someone, who is a medical doctor, would allow himself to be photographed or painted in blackface images that depict and remind us of the horrors of slavery, segregation and all of the things that have been terrible for African-Americans in this country,” said Guns, Second Calvary’s senior pastor.

He said he and members of his congregation have difficulty with the governor’s explanation. “He made one statement Friday and a different statement on Saturday, which makes it very difficult to believe him,” Guns said.

Guns said he believes the country has taken steps backward since the Civil Rights Act was enacted in 1964.

“The challenge is, America has never really dealt with the question of slavery, the very destructive way in which slavery destroyed black people. After that era there were decades of reinforcement of negative stereotypes of black families. Destruction of black communities, and the black man,” Guns said.

‘I want him to be top-notch’

Melissa Brooks, a Norfolk resident, was adamant that Northam should resign.

“He’s supposed to be ….the figure that we all look up to. And if he’s going to be my governor, then I want him to be top-notch,” said Brooks, who is white.

Brooks said she was worried Northam would have to expend too much time dealing with his current problem. She said she believes Virginia residents need his full attention, and he can’t give that to them right now.

David Wright, a grandfather of 13 and an Army veteran, said his barometer for Northam is whether the governor is doing a good job leading Virginia, and if the state is thriving.

When asked if Northam can still lead, the Norfolk resident questioned if Northam was now reflecting on how he treats African-Americans.

“I’m not gonna really grade the picture that much because I know … white people,” said Wright, who is African-American. “It’s not a new thing. It’s just everybody is coming out in the open.”