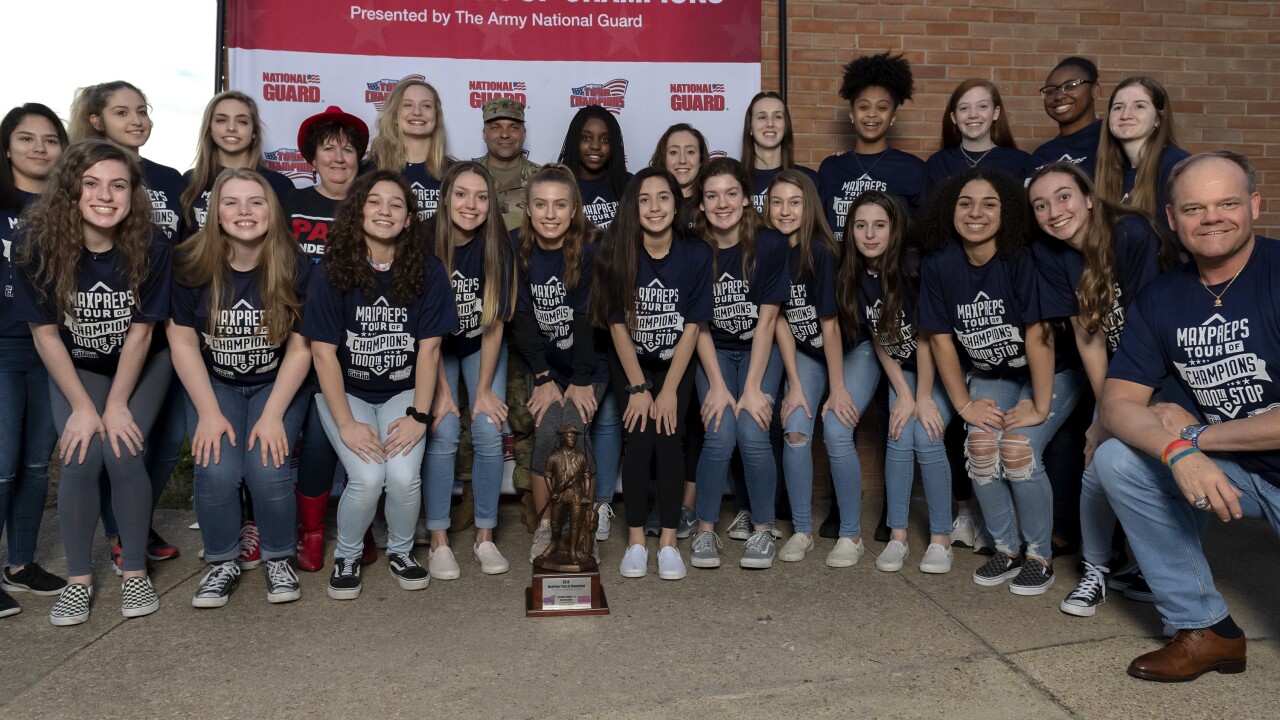 VIRGINIA BEACH, Va. (MaxPreps.com) – The Princess Anne High School girls’ volleyball team has finished No. 22 nationally for the 2018 season. The announcement was made by MaxPreps, the online high school sports leader and a CBSSports.com site.

“The MaxPreps Tour of Champions presented by the Army National Guard honors the very best high school teams in the nation,” said Andy Beal, president and founder of MaxPreps. “To qualify, you must be highly ranked nationally by MaxPreps; and you must also win a state championship. Those are tough qualifications considering there are more than twenty thousand teams competing in high school varsity volleyball.”

“This is one of the most exciting experiences for our school,” said Princess Anne head volleyball coach Craig Dooren, who completed his 20th season. “Three of our senior girls are going to a military school – Army (U.S. Military Academy at West Point, N.Y.), Naval Academy and the Air Force Academy. It’s great to see the girls being rewarded for the hard work they put in,”

Princess Anne was queen of the court as the Cavaliers completed a perfect 29-0 season by sweeping North Stafford, 3-0, on Nov. 16 to capture the Virginia 5A state championship. The team’s other state title came in 2016. Princess Anne is one of only 10 girls’ volleyball schools being honored on this year’s Tour of Champions.

The senior class won 116 of 125 matches (.928 winning percentage). The team swept their last 20 matches of the season and only lost four sets all year. Under Dooren’s tutelage, Prince Anne has won at least 27 matches in each of the past five seasons going a cumulative 146-12 (.924).

MaxPreps Computer Rankings are used to determine team rank for the Tour of Champions. The system utilizes the huge number of game results stored in the MaxPreps database. Generally, the more a team wins the higher the ranking, but the system takes into account quality wins (against other highly ranked opponents), margin of victory, and strength of schedule. Playoff games are weighted 2.1 times a regular season game.

Established in 1636, the Army National Guard has a 378-year history of service to our Nation and its communities. In exchange for part-time service, Guard members receive good pay, money for college or vocational school, paid training in one of 200 career fields, low-cost health insurance, advancement opportunities and more. Qualified juniors and seniors can join the Army National Guard while still in high school and complete their initial and advanced training in the summers between school years. The Army National Guard has more than 3,600 locations across all 50 States, the District of Columbia, Guam, Puerto Rico and the U.S. Virgin Islands. For more information or to learn how you can join our team, visit www.NATIONALGUARD.com/moneyforcollege