Gov. Northam will not resign this morning, according to Virginia Democrats 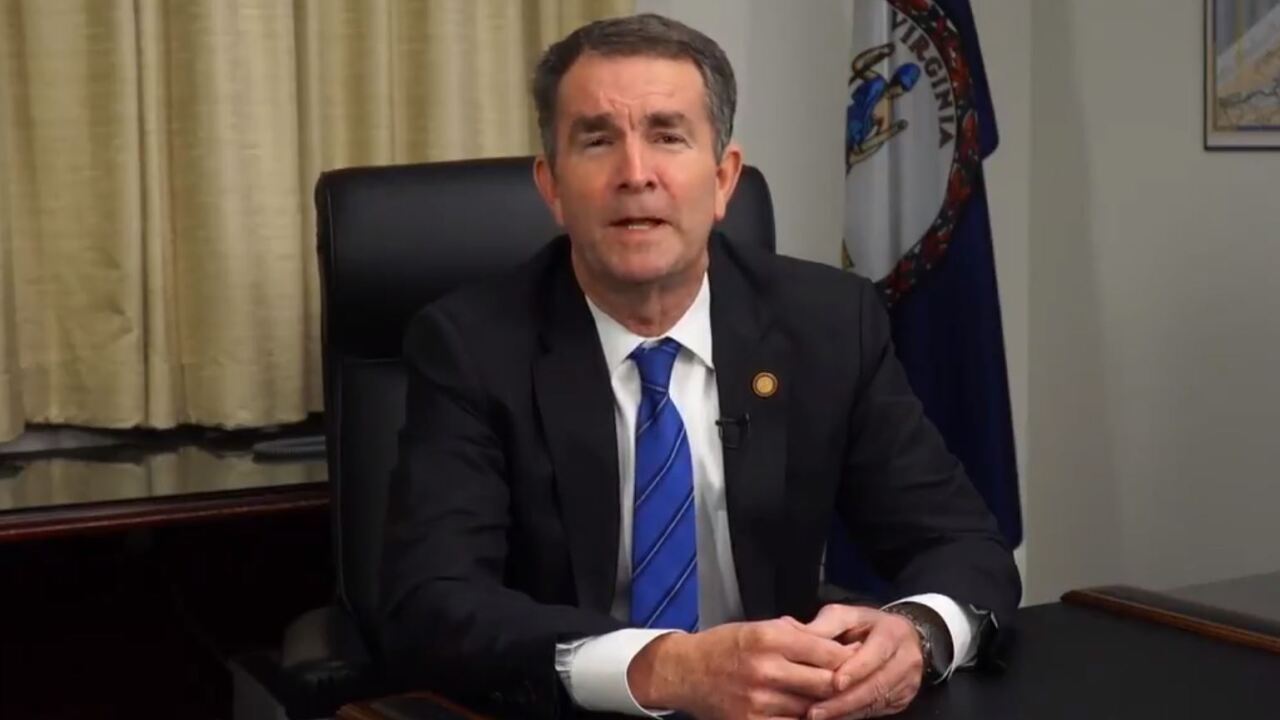 We made the decision to let Governor Northam do the correct thing and resign this morning – we have gotten word he will not do so this morning.

We stand with Democrats across Virginia and the country calling him to immediately resign. He no longer has our confidence or our support. Governor Northam must end this chapter immediately, step down, and let Lt. Gov. Justin Fairfax heal Virginia's wounds and move us forward.

The Democratic Party of Virginia said it had word that Virginia Gov. Ralph Northam would not resign Saturday morning.

A series of prominent Democrats demanded Northam’s resignation on Friday, excoriating him for appearing in a racist yearbook photo showing one person dressed in blackface and another in the KKK’s signature white hood and robes.

The calls came from a number of 2020 presidential candidates, members of Congress and prominent liberal organizations, all of whom said Northam’s apology on the issue was not enough. The NAACP also called for Northam to leave office.

Those calls were echoed by many Virginia House Democrats, but Sens. Tim Kaine and Mark Warner did not call for his resignation. Both said they were shocked and offended by the photos, but in separate statements both said it was time for the governor to think about what comes next for him and to listen to those he has offended.

Northam, for his part, has vowed to finish his one and only term as Virginia governor, issuing a video statement on Friday evening where he apologized but pledged to remain in office.

My fellow Virginians, earlier today I released a statement apologizing for behavior in my past that falls far short of the standard you set for me when you elected me to be your governor. I believe you deserve to hear directly from me. pic.twitter.com/1rSw1oxfrX

The photograph, which was obtained by CNN, appears in the 1984 yearbook for Eastern Virginia Medical School yearbook. Northam apologized in a statement on Friday and did not say if he was wearing the KKK outfit or blackface, but the governor’s repentance was far from enough for Democrats like Sen. Kamala Harris, former Housing and Urban Development Secretary Julian Castro and a cadre of powerful Democratic organizations. 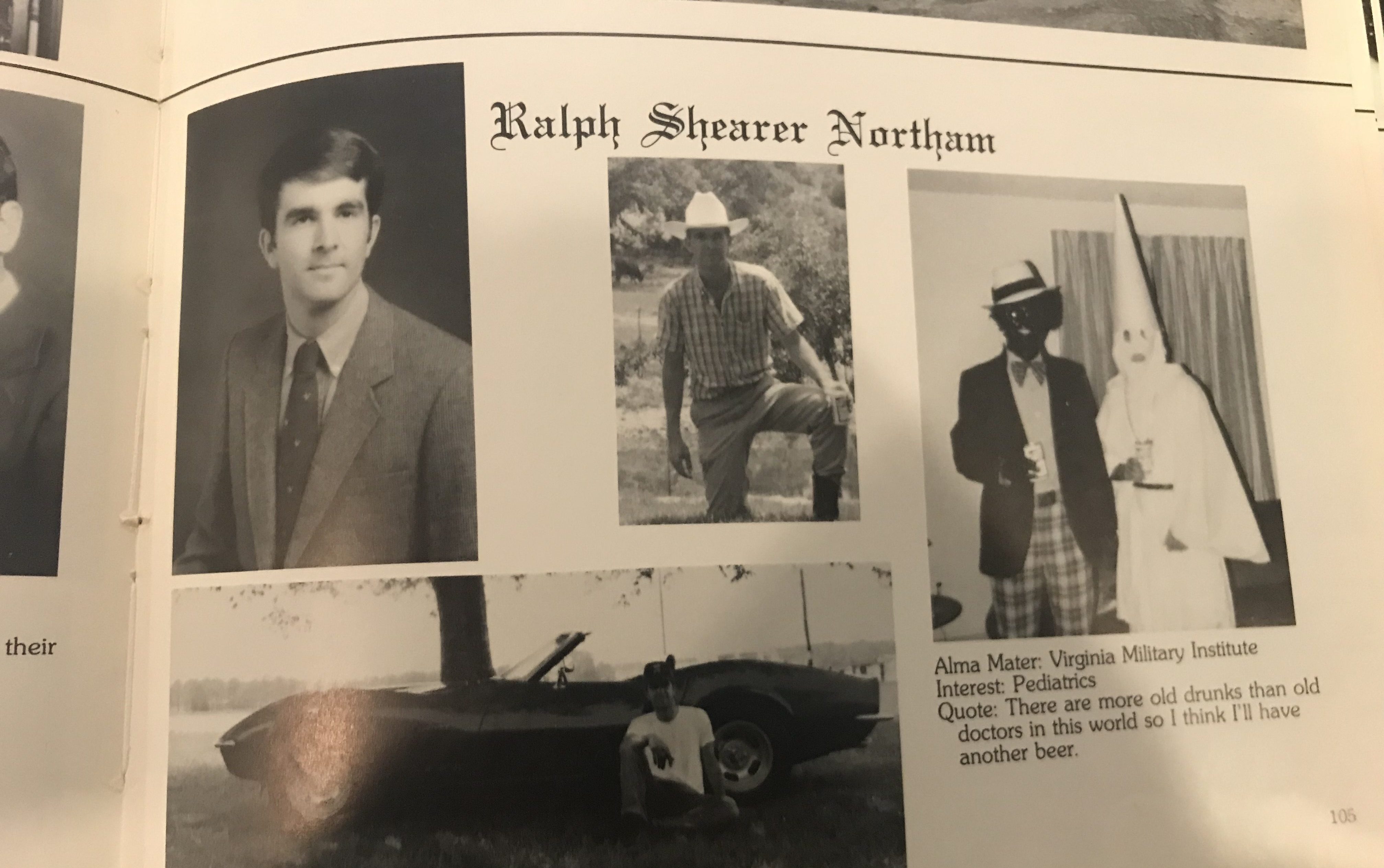 Castro was the first Democratic presidential candidate to call for Northam’s resignation.

“It doesn’t matter if he is a Republican or a Democrat. This behavior was racist and unconscionable,” he tweeted. “Governor Northam should resign.”

He was quickly joined by others, including Harris.

“Leaders are called to a higher standard, and the stain of racism should have no place in the halls of government,” she tweeted. “The Governor of Virginia should step aside so the public can heal and move forward together.”

And Sen. Elizabeth Warren of Massachusetts, who launched a presidential exploratory committee in December, joined the others.

“These racist images are deeply disturbing,” she said. “Hatred and discrimination have no place in our country and must not be tolerated, especially from our leaders — Republican or Democrat. Northam must resign.”

Sen. Kirsten Gillibrand, of New York, who has announced she’s running for president, initially stopped short of calling for Northam to step down, noting she had not seen the photo. Later on Friday night, she said she had seen the photo and felt it was time for Northam to leave.

“There aren’t two sets of rules for our friends and our foes: Right is right and wrong is wrong. Americans deserve to be respected by their leaders, and racism cannot be excused in our government or anywhere else. Having seen the photo, I believe Governor Northam should resign,” Gillibrand said on Twitter.

Eric Swalwell, a California congressman who is considering a run, joined with those calling for Northam’s ouster.

“No, you can’t wear a black face or a white hood and lead a state. Not now and not ever,” he tweeted. “But we are merciful people. Governor Northam should step down, seek forgiveness, and through good deeds earn the respect of the African-American Community.”

Northam, a former pediatric neurosurgeon and Army doctor, won the governorship in 2017. In a statement released hours after the photo was first published by the far-right website Big League Politics, Northam confirmed he was in the photo and said in a statement that the costume was “clearly racist and offensive.”

In a straight to camera video he later posted, Northam apologized again and said, “I cannot change the decisions I made nor can I undo the harm my behavior caused then and today.”

The photo fell “short of the standard you set for me when you elected me to be your governor.”

But he did not resign and vowed to serve out the remainder of his term.

Former Virginia governor Terry McAuliffe also released a statement saying the governor should resign, saying, “The situation that he has put himself and the Commonwealth of Virginia in is untenable.”

Virginia Rep. Bobby Scott said in a press release that “the Governor must now make the right decision that is best for the Commonwealth of Virginia,” but also said that he “takes him at his word that he is deeply sorry, and that he understands that his behavior was inappropriate and offensive.”

“The racist photo from Governor Northam’s 1984 yearbook is horrible. This causes pain in a state and a country where centuries of racism have already left an open wound,” Kaine said in a statement. “I hope the Governor—whose career as an Army officer, pediatrician and public official has always manifested a commitment to justice and equality for all—now takes the time to listen to those he has hurt and reflect on how to move forward.”

Warner said Northam much “carefully consider what comes next.”

“This photo is shocking and deeply offensive, all the more so because of Virginia’s long and painful history of racism and violence toward African Americans. The Governor must now listen to the people and communities he has hurt,” he said.

And the Virginia Legislative Black Caucus also declined to call for his ouster on Friday, saying they were “still processing what we have seen about the Governor” but labeled it “disgusting, reprehensible and offensive.”

If Northam were to heed the calls of those prominent Democrats looking to pressure him into stepping down, Justin Fairfax, the 39-year old, African American lieutenant governor, would be elevated to governor.

Rep. Elaine Luria, a freshman congresswoman from Virginia, called for him to step down, along with other Democratic Virginia congresspeople.

“We need leaders who will bring us together instead of driving us apart. While it was proper for Governor Northam to apologize, there is no excuse for this type of photograph then or now,” Luria said. “Unfortunately, the existence of this photograph does not bring us together. I ask Governor Northam to resign. This isn’t about politics, this is about what is right and wrong.”

Rep. Abigail Spanberger, another freshman congresswoman from Virginia, did the same in a tweet, saying, “There should always be serious consequences for actions that demean, intimidate or threaten our African-American communities” and calling for the governor’s resignation.

Virginia Rep. Donald McEachin also called for Northam to step down in a tweet.

My official statement calling for Northam to resign: pic.twitter.com/nHVOgx6ibq

The series of 2020 Democrats urging Northam to resign were joined by a growing group of powerful Democratic leaders and outside organizations.

“Black face in any manner is always racist and never okay,” said Derrick Johnson, President of the NAACP. “No matter the party affiliation, we can not stand for such behavior, which is why the @NAACP is calling for the resignation of Virginia Governor @RalphNortham”

“Northam’s racist med school antics have no place anywhere in America,” Daily Kos Founder and Publisher Markos Moulitsas said in a statement. “No apology is enough. Northam must resign immediately.”

MoveOn.org, a progressive advocacy organization, also launched a petition calling on Northam to step down.

“In light of the recently uncovered pictures of Virginia Governor Ralph Northam in his medical school yearbook that clearly show he is a racist, Governor Northam must resign immediately,” reads the petition.

And so did longtime Democratic operatives.

“Governor Ralph Northam admitted that he is pictured in the racist photo in his medical school yearbook. Making amends and rebuilding trust must start with resigning his post. Virginians deserve better,” Ilyse Hogue, the President of NARAL- Pro-Choice America, tweeted Friday.

Hogue’s statement is significant because, in the days leading up to his yearbook photo being made public, Northam was being criticized for controversial comments voicing support for a third-trimester abortion bill currently held in the state legislature.

Hogue’s group had backed Northam from the criticism.