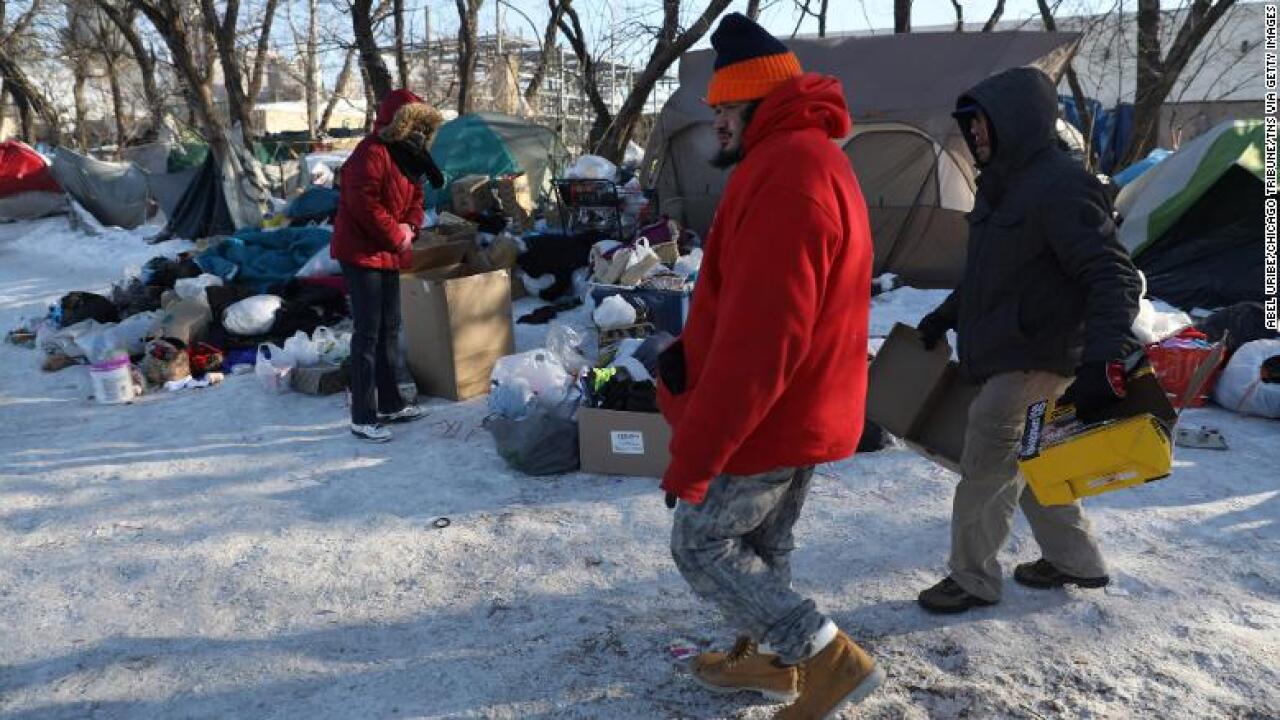 Felipe, center, and George Arroyo, right, look for carton boxes to burn inside a garbage can to keep an improvised fire going at a makeshift camp on Roosevelt Road near the Dan Ryan Expressway on Jan 30, 2019. (Abel Uribe/Chicago Tribune/TNS)

Felipe, center, and George Arroyo, right, look for carton boxes to burn inside a garbage can to keep an improvised fire going at a makeshift camp on Roosevelt Road near the Dan Ryan Expressway on Jan 30, 2019. (Abel Uribe/Chicago Tribune/TNS)

When a fire forced dozens of homeless people to leave their tents in Chicago’s South Loop neighborhood, Jackie Rachev at the local Salvation Army was ready to welcome them.

Little did she know a Good Samaritan was paying to put them up in hotel rooms.

It’s been brutally cold in Chicago, with temperatures of 20-25 below zero on Wednesday. The homeless encampment near the Dan Ryan Expressway was heated by 150 to 200 portable propane tanks — many of them donated by generous citizens.

Shortly after noon, one of the tanks in the tent city exploded because it was too close to a space heater, CNN affiliate WLS reported. That left city officials with no option but to close the encampment and hurry to find shelter for the people living there.

“This is extremely unsafe,” said Major David Byrd, the Illinois State Police Region commander. Thankfully, no one was injured in the explosion.

Rachev said she received a call from the city asking her to help provide shelter for around 70 people. But later she got another call saying it was no longer necessary — because a Good Samaritan had offered to pay for hotel rooms.

“The Salvation Army was prepared to welcome approximately 70 individuals who were affected by the explosion, but was notified those services were not necessary as the individuals were already being taken of,” Rachev told CNN. “We are thrilled that they are safe and warm.”

Rachev said she did not know the identity of the Good Samaritan or which hotel the homeless people were booked in. Nor was it clear Thursday how long they will be staying at the hotel.

“We know Chicagoans have very big hearts, but we ask that they do not provide propane tanks, as they are very dangerous,’ she said.

Her words echo those of the Chicago Fire Department, which in a tweet said: “During extreme cold weather, we understand that people want to help our homeless population. However, we ask that under no circumstance should you donate propane tanks which are potential fire hazards. Propane tanks can cause potential fires and explosions.”

CNN has reached out to the city of Chicago to get more information about the mystery Good Samaritan and will update the article accordingly.