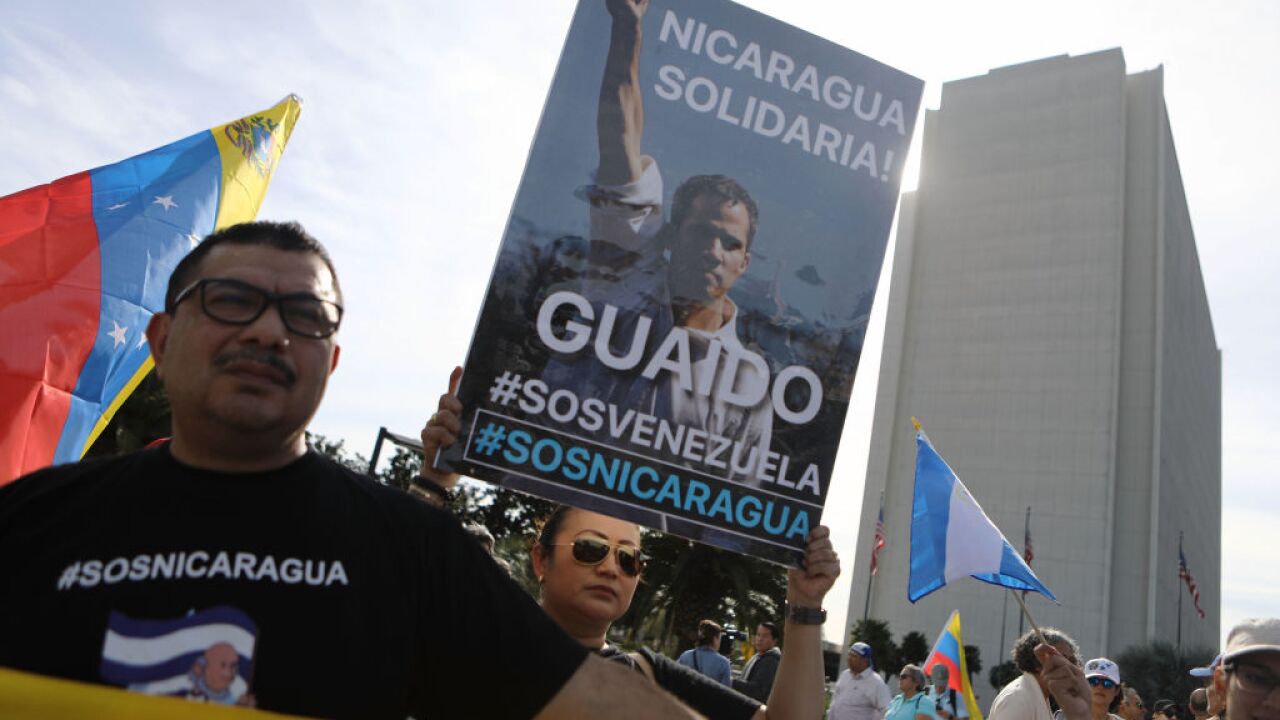 As Venezuela continues its slide into chaos, the nation’s self-proclaimed interim president says his movement to oust President Nicolas Maduro is gaining momentum and will be demonstrated in a massive rally planned for this week.

CARACAS, VENEZUELA – JANUARY 26: Opposition leader of Venezuela Juan Guaidó delivers a speech next to his wife Fabiana Rosales during a demonstration on January 26, 2019 in Caracas, Venezuela. Opposition leader Juan Guido has self-proclaimed as interim President of Venezuela against Nicolas Maduro’s government. Many world leaders have expressed their support for Guaidó this week while others stand behind Maduro. (Photo by Marco Bello/Getty Images)

Venezuela’s opposition has called for nationwide anti-government protests to take place this week, according to Juan Guaido, head of the opposition-led National Assembly.

In a video posted to Twitter on Sunday, Guaido called for the people of Venezuela to peacefully take to the streets this Wednesday in opposition to Maduro’s presidency. He also asked the people to join him for a second protest Saturday, where he called for support from within Venezuela and throughout the world.

“The people who think that we are going to fizzle, I think they are not going to be happy,” Juan Guaido said Friday in his first public appearance after challenging Maduro’s regime. “There are people here in the streets for a long time.”

Maduro has blamed the chaos on the US, saying Venezuela has fallen “victim of a US conspiracy.”

He says the US orchestrated a coup to remove him from office, telling CNN Turk he’s reached out to President Donald Trump but hasn’t received a response because “I think he’s overwhelmed with his domestic problem and, I believe, I think he despises us.”

“He despises all of America and the Caribbean. I think he despised the world,” he told the Turkish network. “This is the reason for the coup. They don’t want us to get better. They sabotage us and try to destroy the economic system.”

CNN could not independently confirm the counts.

In an address to the UN Security Council on Saturday, US Secretary of State Mike Pompeo urged leaders to side with Guaido.

“Our nations must stand up for the rule of law and support the leader who the Venezuelan people have affirmed as their legitimate interim president,” Pompeo said. “Either you stand with the forces of freedom, or you’re in league with Maduro and his mayhem.”

Officials from the UK, Spain, Germany and France gave Maduro an ultimatum Saturday: Call elections within eight days or Guaido will be recognized as president.

Maduro has balked at the demand.

“Nobody gives us an ultimatum,” Maduro said. “All of Europe is bowing down to Donald Trump. It’s that simple, especially when it comes the Venezuela.”

On Thursday, a security alert said non-emergency US employees had 72 hours to leave Venezuela. But Pompeo said the United States doesn’t recognize Maduro’s power to expel the diplomats, and Guaido called on Venezuela’s diplomats to remain in the United States.

Pompeo has warned against testing the US’ resolve to protect its citizens. National Security Adviser John Bolton echoed that admonition Sunday, tweeting, “Any violence and intimidation against US diplomatic personnel, Venezuela’s democratic leader (Guaido) or the National Assembly itself would represent a grave assault on the rule of law with a significant response.”

Maduro told CNN Turk on Sunday all diplomats had left the country, except a small group authorized to stay.

The US embassy in Venezuela issued a security alert informing of its limited ability to provide emergency services to Americans in the country and urging them to “strongly consider departing Venezuela.”

Both leaders are looking to the military for a way forward.

Guaido told The Washington Post on Sunday that the opposition party was in “behind the scenes” talks with military and civilian officials to force out Maduro.

He has asked for elections, and has tried to assure troops who split from the Maduro administration that they will be protected — possibly by an amnesty bill created by the National Assembly.

The bill — which could see a vote Tuesday — would also pardon civilians, politicians, public officials and military members accused of crimes or unconstitutional acts during Maduro’s and former president Hugo Chavez’s tenure.

Despite the guarantees, the head of Venezuela’s armed forces says he still supports Maduro.