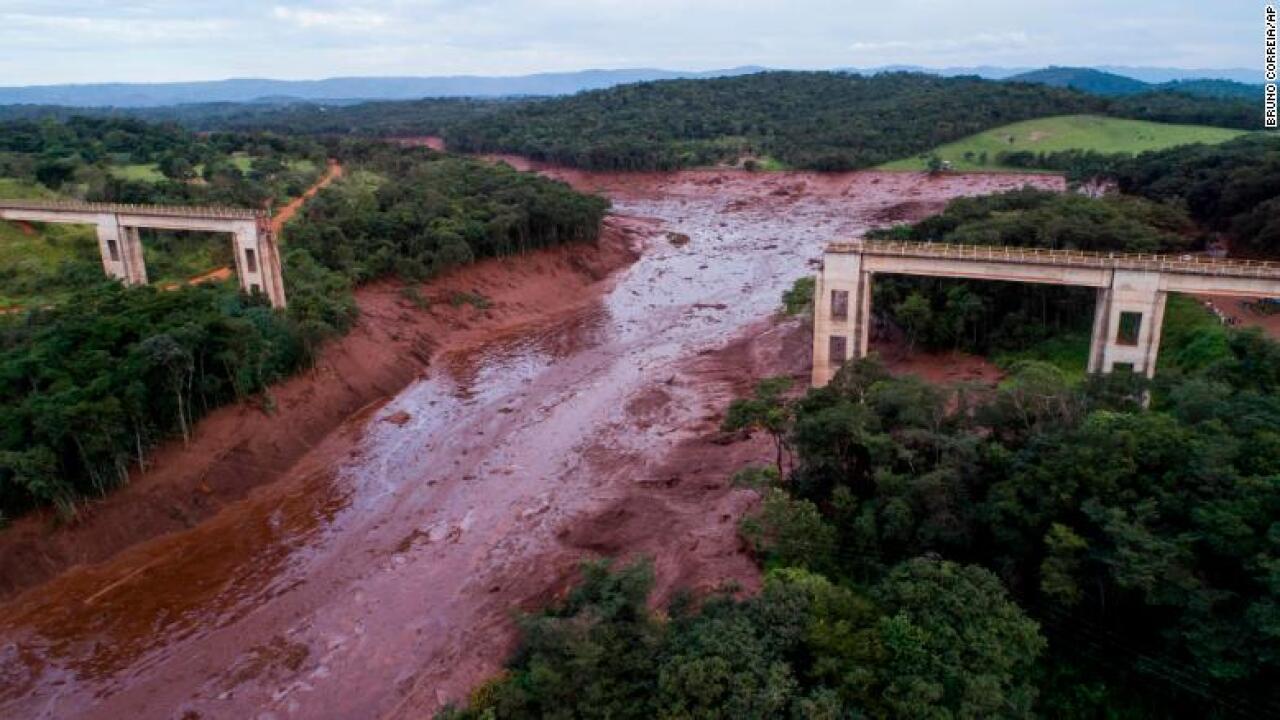 An aerial view shows a collapsed bridge after flooding from a dam collapse Friday in southeast Brazil.

An aerial view shows a collapsed bridge after flooding from a dam collapse Friday in southeast Brazil.

At least 34 people have been confirmed dead and hundreds are missing Saturday after a dam burst a day earlier at a Brazilian iron mine, according to the the local fire department.

The dam’s breach flooded parts of the southeastern state of Minas Gerais with mining debris and mud, which covered the city of Brumadinho, according to footage from CNN affiliate Record TV.

Video from the scene showed helicopters hovering feet above the ground as firefighters plucked people from the muck and carried them away.

The latest death toll comes from the Minas Gerais Fire Department, which is conducting search and rescue operations. The fire department had earlier said 296 people were missing.

But different groups on the ground indicated the number of missing could be as high as 413.

Some 279 people have been rescued, a spokesman for the civil defense agency, Officer Sargent Acquiles, told CNN.

At least 200 rescuers were expected Saturday at the scene of the dam burst, double from a day earlier, according to the Minas Gerais government.

The state judiciary also froze more than $260 million from Vale, the Brazilian mining giant that manages the Feijao mine, with a presiding judge citing the company’s responsibility for the disaster. The money will be deposited into a judicial account to compensate for any costs to the state as a result of rescue operations or victim support.

Brazilian President Jair Bolsonaro flew over the scene Saturday morning and met with Minas Gerais Gov. Romeu Zema before returning to the capital.

“It is hard to witness this whole scenario and not be emotional,” Bolsonaro tweeted Saturday.

“We will do everything in our reach to help the victims, minimize damage, investigate the facts, claim justice and prevent new tragedies like the ones in Mariana and Brumadinho for the well-being of Brazilians and the environment,” he said, referring to a similar mining disaster in 2015.

‘Beyond anything that I could imagine’

A “breach” Friday caused mining debris to spill into the mine’s administrative area, where employees were working, according to Vale. Authorities said Friday that 427 people had been in the iron mine when the dam burst.

Officials expect to contain the mudlike mine waste, called “tailings,” within two days, according to the Brazilian National Water Agency. That’s how long it’s due for the muck to reach the Retiro Baixo hydroelectric dam, 220 kilometers (135 miles) away, the agency said.

Water agency officials are “monitoring the mine tailings” and “coordinating actions” to supply quality water to the affected region, it said.

In a company video, Vale chief Fabio Schvartsman asked for forgiveness Friday “from all those affected and all of Brazilian society.”

“Unfortunately, the dam break (today) happened. This is inexcusable,” Schvartsman said, adding that Vale will “do all possible” to aid victims.

“What just happened just now is beyond anything that I could imagine,” he said.

He also said the company had put “immense effort” into improving its dams, especially after the mining disaster in Mariana.

Israeli Prime Minister Benjamin Netanyahu offered to help Brazil with the search and rescue, Bolsonaro said Saturday on Twitter, adding that he had accepted.

The UN System in Brazil also offered support, expressing its “deep sorrow and solidarity to the families” of the victims.

“The UN regrets the immeasurable loss of lives and significant damage to the environment and human settlements,” a statement said. “The UN System is available to support the actions of the Brazilian authorities in the rapid removal of the victims and in the establishment of dignified conditions for the eventual homeless and the affected population.

“The rigorous investigation of the facts that led to this tragedy,” it added, “will be closely followed by Brazilians and the world community.”