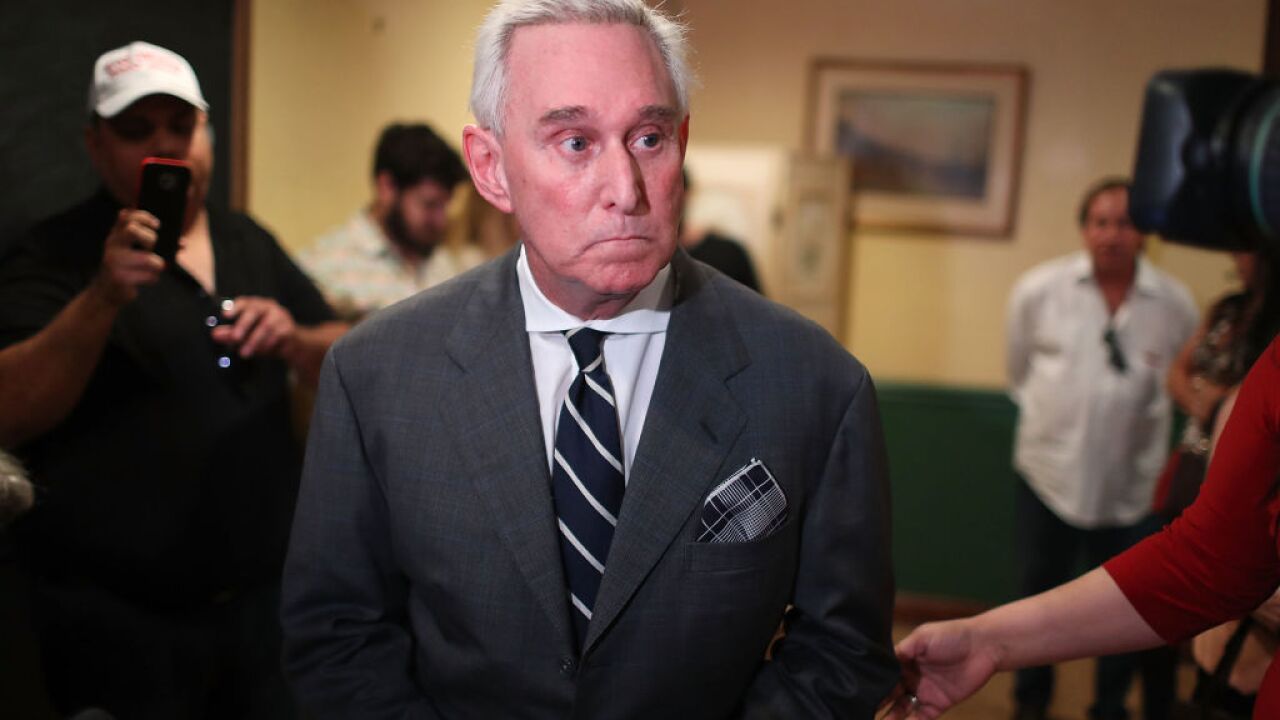 CORAL GABLES, FL – MAY 22: Roger Stone, a longtime political adviser and friend to President Donald Trump, speaks during a visit to the Women’s Republican Club of Miami, Federated before signing copies of his book ‘The Making of the President 2016’ at the John Martin’s Irish Pub and Restaurant on May 22, 2017 in Coral Gables, Florida. The book delves into the 2016 presidential run by Donald Trump. (Photo by Joe Raedle/Getty Images)

Roger Stone has been indicted by a grand jury on charges brought by special counsel Robert Mueller, who alleges that the longtime Donald Trump associate sought stolen emails from WikiLeaks that could damage Trump’s opponents at the direction of “a senior Trump Campaign official.”

The indictment’s wording does not say who on the campaign knew about Stone’s quest, but makes clear it was multiple people. This is the first time prosecutors have alleged they know of additional people close to the President who worked with Stone as he sought out WikiLeaks founder Julian Assange.

Stone was arrested by the FBI Friday morning at his home in Florida, his lawyer tells CNN. He was indicted Thursday by a federal grand jury in the District of Columbia on seven counts, including one count of obstruction of an official proceeding, five counts of false statements, and one count of witness tampering.

The special counsel’s office said he will appear before a federal judge in Fort Lauderdale, Florida, at 11 a.m. ET.

On October 7, 2016, after WikiLeaks released its first set of emails, prosecutors say Stone received a text message from “an associate of the high-ranking Trump campaign official” that said “well done,” signaling that the Trump campaign was looped in on Stone’s quest for dirt on Democrats.

The associate and the high-ranking campaign official are not named in the complaint, though the indictment describes how Stone told a reporter that what Assange had in the unreleased emails was good for the Trump campaign. Stone responded at the time, “I’d tell [the high-ranking Trump Campaign official] but he doesn’t call me back.”

An email matching that wording that was published by The New York Times shows that the official Stone referred to was Steve Bannon.

After the October 7 releases, Stone boasted to “senior Trump Campaign officials” that he had correctly predicted the data dump, prosecutors say.

Stone has maintained publicly that he did not know in advance about what WikiLeaks would release. That alleged lie, which he also told to Congress, forms the basis for some of his other criminal charges in Friday’s indictment.

The indictment unsealed Friday after Stone’s arrest makes clear he communicated with multiple people about what Assange knew, and they were providing him updates from Assange and what Stone wanted to communicate with him. Prosecutors cite text messages and emails he exchanged with the people about what Assange had, and one sent a photo of himself standing outside the Ecaudorian embassy in London, where Assange has stayed for years.

The men passed on much of the information after WikiLeaks began speaking publicly about stolen documents it had but before all had been released.

According to previous reporting, those people included radio host Randy Credico and Jerome Corsi. They are unnamed in the indictment and have not been charged with crimes.

Stone also communicated with a “supporter involved with the Trump Campaign” via a text message about what else Assange had.

About a dozen officers with heavy weapons and tactical vests fanned out across Stone’s lawn.

Law enforcement shined a flashlight into Stone’s front door before one officer rapped against it, shouting, “FBI. Open the door.”

A floor light turned on and moments later, Stone appeared in the front entryway. He confirmed who he was to law enforcement.