One serving of fried chicken a day linked to 13 percent higher risk of death, study finds 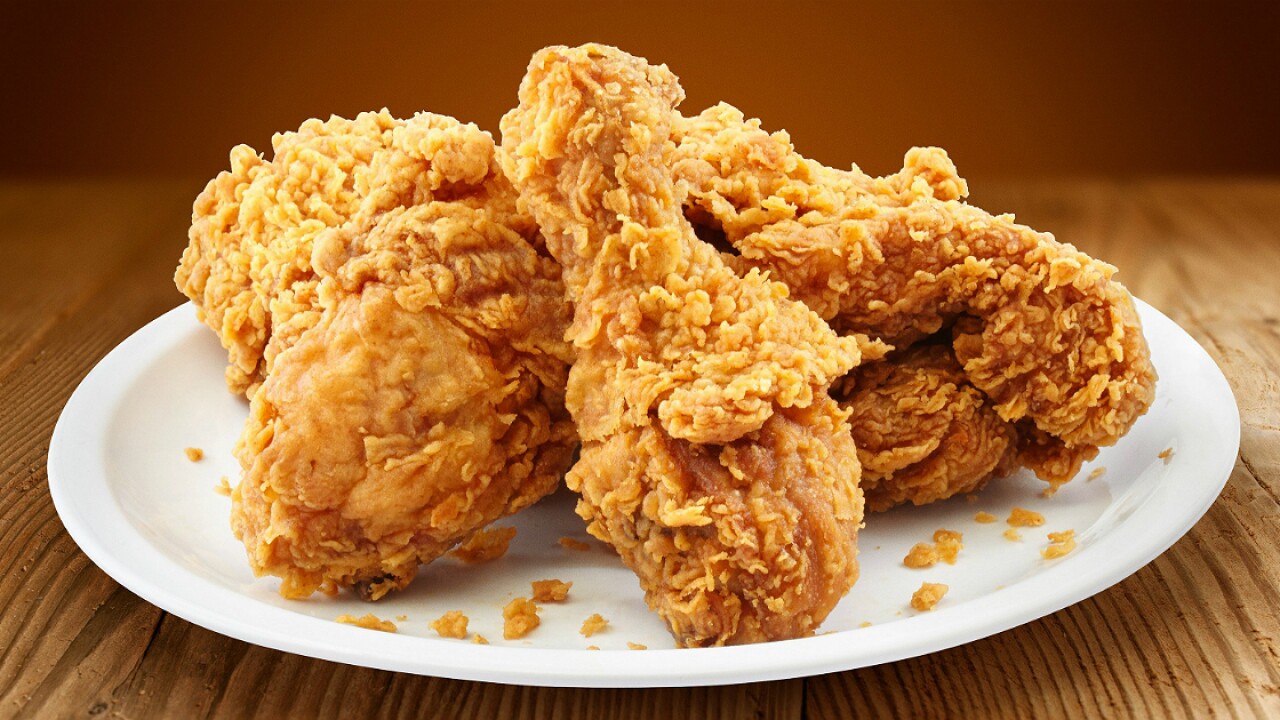 A regular serving of fried chicken or fish is associated with a higher risk of death from any cause except cancer, according to a new study done in postmenopausal women in the United States.

Women who enjoyed fried chicken once or more per day had a 13 percent higher risk of death from any cause compared with women who did not eat any fried food, according to the study, published Wednesday in the medical journal BMJ.

The authors highlight that limiting the consumption of fried foods, in particular fried chicken and fish, could therefore be good for public health.

“We know fried food consumption is something very common in the United States and also around the world. Unfortunately, we know very little about long-term health effect of fried food consumption,” explained the study’s lead author, Wei Bao, an assistant professor of epidemiology at the University of Iowa.

The observational study is the first in the United States, to Bao’s knowledge, to look at the relationship between fried food consumption and mortality. However, previous research has shown links between higher consumption of fried foods and an increased risk of Type 2 diabetes and heart disease.

A 2017 study found that people who eat fried potatoes two or more times a week double their risk of an early death compared with those who avoid them.

Turning ‘a good thing into a harmful thing’

When they enrolled in the study, the women completed a food frequency questionnaire asking about consumption and portion size of 122 food items, including fried chicken and fish, as well as french fries, tortillas and tacos.

Other factors related to mortality, such as education level, income, total energy consumption and overall diet quality, were taken into account in the team’s calculations.

Women eating one or more servings of fried food a day had an 8 percent higher risk of death from all causes as well as heart-related death compared with those who did not eat fried food. However, this finding was not statistically significant, the study added.

But there was no link between total or specific fried food consumption and cancer deaths, the study found.

Fried food’s link to health outcomes is the combined effect from the food itself and the frying process, Bao explained.

Fish can be helpful for cardiovascular diseases, so he expected a lower association between fried fish and mortality than the one seen in the study. “If you fry fish, it may turn a good thing into a harmful thing.

“Although there is an increased risk of eating fried food in terms of mortality, the risk is lower with low frequency,” Bao added.

Bao thinks the study can be applied to American men, too. Previous studies into health effects of fried foods didn’t show gender differences, he added.

The rise in risk could be down to a number of reasons, according to the study. One possibility is that these foods could be ultraprocessed, according to the authors, meaning they may be high in sodium, which could contribute to a higher risk of mortality.

The authors note that the study wasn’t able to identify what types of oils were used to cook the foods, at what temperature or which cooking methods were used. These also affect the association between fried foods and risk of death.

In the United States, people are more likely to eat fried food at fast food restaurants, the study explained. This matters, Bao explained, because if people fry food at home, they are less likely to reuse oil, which creates more harmful products in the oil that are absorbed into the food.

Bao believes portion control and reducing how often we indulge in fried food can be steps toward protecting our health.

“There is a growing body of evidence on heart disease and its association with dietary patterns from different parts of the world,” said Jo Ann Carson, science volunteer and past chair of the nutrition committee of the American Heart Association. “Previous research has told us the traditional Southern diet, which is known for fried foods, is not ideal for optimal heart health and this study helps break down why that may be,” she said, adding that nearly 80 percent of cardiac events can be prevented, yet heart disease is the number one killer of women.

However, Bao said that the new study’s findings “can’t be generalized globally.” People around the world could have different frying practices, such as eating fried food at home or outside, or they might use different oils.

In Spain, research into the association between fried food consumption and mortality from all causes showed no links between the two, because the population used olive oil, he added.

Bridget Benelam, nutrition scientist at the British Nutrition Foundation, who was not involved in the research, believes there could be a number of reasons why fried chicken and fish could be bad for our health.

The increased fat content and the effect of frying at high temperatures can cause the production of trans fats and other harmful compounds called glycation products, she wrote in an email. Glycation products — compounds formed when protein-rich animal foods, like meat and fish, are cooked at high temperatures — are also linked with a higher risk of all cause and cardiovascular mortality, according to previous studies.

Lynne Garton, dietetic adviser to the charity Heart UK, said the study is “interesting” but warned about drawing firm conclusions. The women who ate more fried foods tended to be generally less healthy, meaning there are a “host of factors” that could have led to the results, she explained.

Additionally, their “diet was assessed at the beginning of the study, which assumes the same diet was followed for the whole 18 years of follow-up.”

Regular eating of fried foods, particularly when dining out, means people consume more calories, fat and salt, and these foods are often being served up in larger portion sizes, wrote Tracy Parker, senior dietitian at the British Heart Foundation, in an email.

“But the good news is using healthier cooking methods at home like baking, grilling or roasting and choosing healthier options while eating out are simple changes that can make a big difference to your heart health,” said Parker, who was not involved in the research.