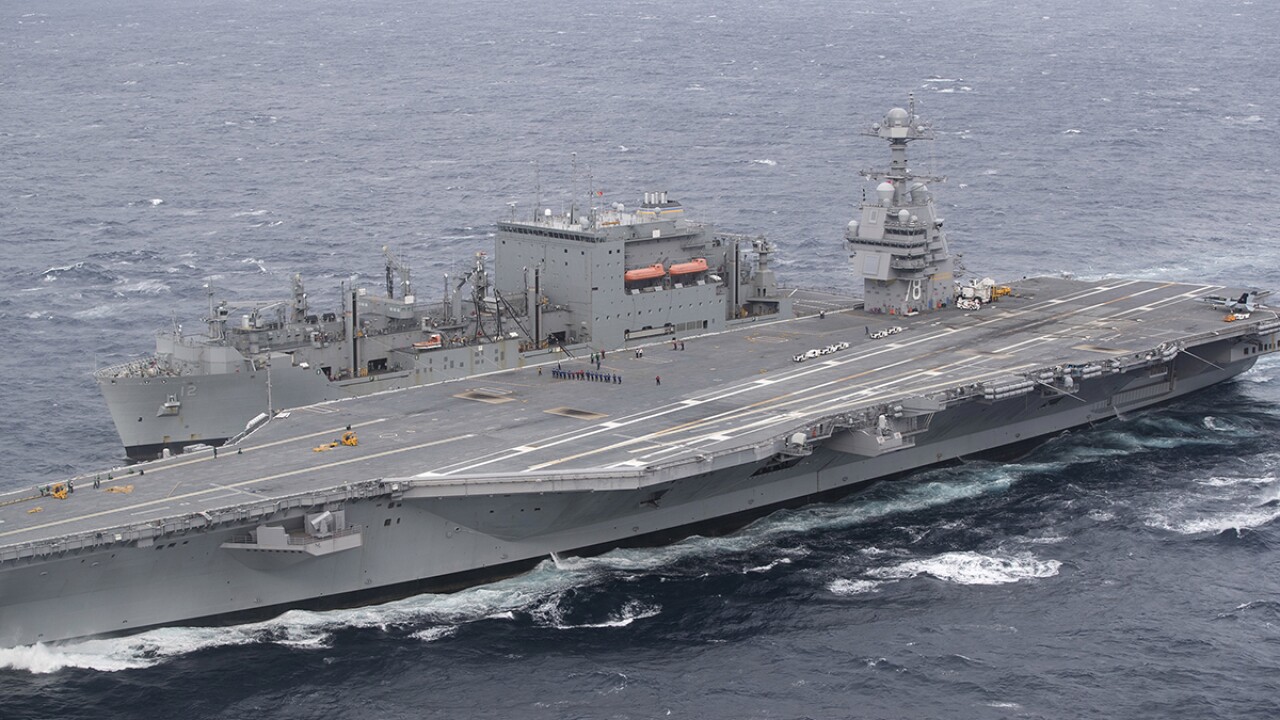 The acceptance marks a major milestone for the ship and the Ford-class of aircraft carriers to follow.

AWE Upper Stage #1 was turned over to the ship on December 21, following testing and certification by engineers at Huntington Ingalls Industries-Newport News Shipbuilding, where the ship is currently working through post-shakedown availability (PSA).

USS Gerald R. Ford is the first Ford-class aircraft carrier and is the first new carrier design in over 40 years. Unlike Nimitz-class carrier elevators that utilize cables for movement, the Ford class elevators are commanded through electromagnetic, linear synchronous motors allowing for greater capacities and a faster movement of weapons.

Ford also features a dedicated weapons handling area between the hangar bay and the flight deck, on the 02 level, that eliminates several horizontal and vertical movements to various staging and build-up locations. This ultimately offers a 75% reduction in distance traveled from magazine to aircraft.

An additional benefit of the ship’s design is a separate utility elevator that can serve as a dedicated elevator to move both ordnance and supplies, and also serve as a means to medically evacuate (MEDEVAC) injured personnel from the flight deck to the hangar bay. This allows the 10 main AWEs and Ford’s three aircraft elevators to be dedicated to their primary missions of ordnance and aircraft movement during real-world operations.

To keep up with the new technologies and radical changes that the AWEs offer, Ford Sailors recently completed newly developed familiarization, operations, and maintenance training in Newport News to become better educated on how to work with and maintain the elevators. The crew is now conducting hands-on training where they will validate technical manuals and maintenance requirements cards against the elevator’s actual operation. Their feedback and observations will ultimately inform future Sailors how to properly and safely operate the elevators.

Alexander said Sailors are now training with the elevator which will complement the classroom instruction they have received to this point.

“Getting this elevator turned over to the ship and allowing our Sailors to get hands-on training on the elevator will help in two ways,” said Alexander. “One, it will help in the training and understanding of the system itself, and two, to work out any bugs that remain with the system during our PSA.”

Work still remains on the remaining 10, though the first elevator has been accepted. All shipboard installation and testing activities of the AWEs are due to be completed prior to the end of Ford’s PSA, scheduled for July. However, some remaining certification documentation will be performed for five of the 11 elevators after PSA completion.

According to Alexander, while there was sense of accomplishment and satisfaction in having the first elevator turned over, the team working on the elevators can’t rest on this single event.

“We’re all 100% invested in this, but there’s still work left to do,” Alexander explained. “We’re all one big team with the same goal in mind: to get these systems operational and turned over to the ship.

“I think it was a greater sense of accomplishment to my Sailors that have been working on these systems for the last 4-to-5 years,” he said. “To be able to finally push the buttons and watch it operate like it’s designed to do was a great feeling. Once these systems are proven, they are going to pay huge dividends for Naval strike capability.”