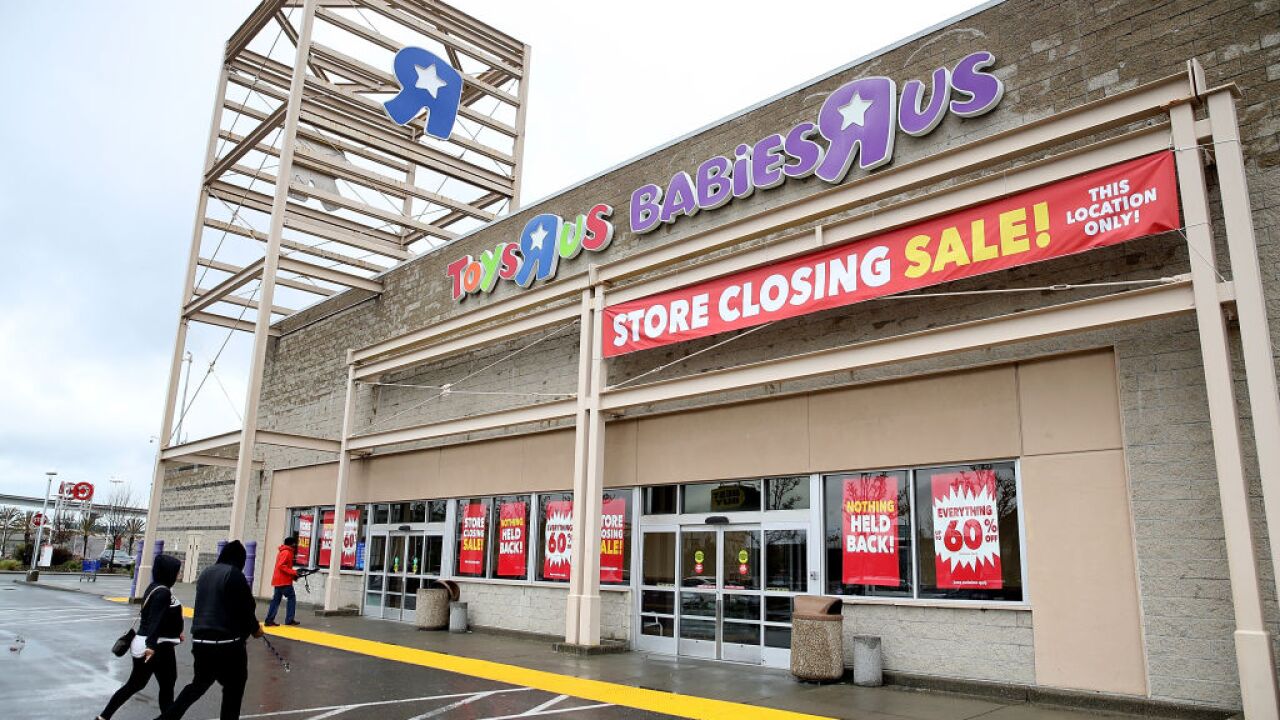 EMERYVILLE, CA – MARCH 15: Customers enter a Toys R Us store on March 15, 2018 in Emeryville, California. Toys R Us filed for liquidation in a U.S. Bankruptcy court and plans to close 735 stores leaving 33,000 workers without employment. (Photo by Justin Sullivan/Getty Images)

You may have never heard of Ollie’s Bargain Outlet. But this eccentric discount chain wants to open hundreds of new stores across the country.

According to the Central Penn Business Journal, Virginia, Ohio, Louisiana, Texas, Maryland, Alabama, Tennesse, Pennslyvania and Indiana are the states that the discount retailer has bought defunct Toys R Us stores.

At this time, it is not known how many are being bought in Virginia (meaning it could be just one store), but The Barclay Group Venture Capital LLC beat out Ollie’s for a lease in Midlothian, Virginia. And in all, Ollies’s placed bids on 12 properties, according to Market Screener.

Ollie’s is one of the wackiest stores around. Its logo is a caricature of founder Oliver “Ollie” Rosenberg with a goofy mustache and buck teeth. Ollie’s boasts that it has “semi-lovely” stores. It doesn’t sell online. And it pokes fun at itself to win over customers.

“A cartoon picture of their founder looks odd, but people seem to like it,” said Neil Saunders, managing director at GlobalData Retail.

Ollie’s stock (OLLI) has nearly quadrupled since it went public in 2015. The company has posted 18 straight quarters of comparable store sales growth. Profit has more than tripled since the IPO.

On Friday, Ollie’s said that store sales during the holidays increased 7.1% from a year ago and raised its guidance.

But is America ready for more Ollie’s Bargain Outlets?

Ollie’s is currently capitalizing on Toys “R” Us’ liquidation.

It has bought 12 former Toys “R” Us sites and is leasing another six. In November, Ollie’s opened its 300th store at an old Toys “R” Us location in Maryland.

“These great sites set us up,” Ollie’s co-founder and CEO Mark Butler told analysts last month. Butler declined to comment for this story through a spokesperson.

Stepping into Toys “R” Us spots is one part of Ollie’s plan to enter states like Texas, Louisiana, and Oklahoma. It plans to open up to 650 new stores around the country.

Ollie’s isn’t the only discount chain barreling along.

Ollie’s business is different from its competitors. Although TJX, Ross, and Burlington mainly sell clothes, and dollar stores offer packaged food and household basics, Ollie’s offers a random mix of everything from space heaters to speakers to comic books at no-frills, warehouse-style stores.

“The products are a lot more eclectic than a TJX or Ross,” said Saunders. “It’s more like a dollar store with lots of different categories.”

Ollie’s sells big brands like Kellogg, Hasbro, and Yankee Candle, as well as its own brands, such as Sarasota Breeze and Steelton Tools, for up to 70% less than department stores and 50% less than Walmart.

Unlike others, 70% of Ollie’s store merchandise comes from buying rock-bottom closeout sale items from manufacturers and retailers.

The company has a 16-member team that scours the market for companies’ overstocked baseball gloves and gardening tools, canceled or delayed orders for dishes and cutlery, and discontinued lines of potato chips and kitty litter.

For example, if the summer ends and manufacturers have lawn chairs and umbrellas lying around that they need to unload quickly, Ollie’s will buy them and will store them away until next spring.

“It’s going to be last year’s model, but it’s going to be super discounted versus anything else that’s out there,” said Scot Ciccarelli, analyst at RBC Capital Markets.

Ollie’s is currently running a “scratch and dent appliance buyout” on dishwashers and ovens. “They may have some scratches or dents, but at these prices, does it really matter?”

Ollie’s benefits from disruption in the market.

When Toys “R” Us went under last year, Ollie’s put out an ad in the newspaper that it wanted to buy up extra toys from suppliers. It ended up grabbing $200 million worth of toys and sold them at up to 75% off the “fancy stores'” prices.

‘The few, the cheap, the proud’

In stores and advertisements, “Ollie” is caricatured as Sherlock Holmes looking through a microscope for deals, or as an Army general in a helmet and fatigues.

“Enlist in Ollie’s Army today” and ”Become one of the few, the cheap, the proud” are some slogans the company taps to recruit members to “Ollie’s Army,” its free rewards program.

Ollie’s tries to use humor to stand out. It relies on witty store signs and marketing to get customers to “giggle a bit.”

The company believes it can build trust by disarming its customers with jokes. “This approach creates a strong connection to our brand and sets us apart from other, more traditional retailers,” it says in its security filings.

A big part of Ollie’s strategy is to highlight differences between its own “functional, but not particularly pretty and shiny” stores and the “fancy stores.” In an ad for electric blankets, Ollie’s says, “Don’t get heated over the fancy stores’ prices.”

The company tries to draw attention by creating a “unique, fun and engaging treasure hunt” at stores that sell unexpected items. Ollie’s slogan — “when it’s gone, it’s gone” — plays to its effort to spur impulse buys.

“You go specifically for the patio furniture, and then the treasure hunt aspect kicks in,” Ciccarelli said. “‘Oh, they’ve got coffee pots.”

But Ollie’s believes its business model shields it from online competition.

“It’s almost impossible to duplicate what we do in the stores online,” CEO Butler said last year. He argued that Ollie’s stores, which rotate in new products almost daily, “provide us tremendous insulation with e-commerce.”

Ollie’s faces plenty of obstacles on its march, however.

Squeezing more dollars out of current members and enlisting new recruits to Ollie’s Army will be difficult.

“The market for value and off-price is becoming saturated,” said Saunders. As Ollie’s expands into new states, it will face stiffer competition.

Companies like TJX and Ross are emphasizing selling more houseware and cookware, which could threaten Ollie’s strength in those areas. Sales at HomeGoods, owned by TJX, grew 7% during its latest quarter.

Ollie’s also faces pressure from increasing wages for employees, particularly as it moves into higher-wage states, and elevated shipping costs. The company is more sensitive to those factors than larger rivals. Ollie’s stock tanked more than 15% in December when it said its quarterly gross margins fell.

In addition, if the economy weakens, customers may pull back their spending at Ollie’s on its more expensive items.

Although consumers usually shop more at value stores during recessions, Ollie’s won’t pick up much new business from cost-conscious shoppers switching to lower-priced stores, Saunders said. Bigger rivals like TJX and Burlington will be in a better position to win customers.

“TJX has more of a balance of customers,” he added. “Ollie’s is a bit more exposed to hard-pressed shoppers.”

For now though, Ollie’s will be able to find goods available in the closeout market to sell to customers.

Ollie’s believes it will benefit from the Trump administration’s tariffs on Chinese goods. That’s because more companies will have extra inventory or will cancel orders as they race to import goods from China.

“We have the opportunity to jump on it,” Butler said.

Ollie’s could also gain market share from Sears’ store closures and the company’s possible liquidation, according to analysts. So Craftsman lawn mowers and Kenmore grills could hit Ollie’s soon.