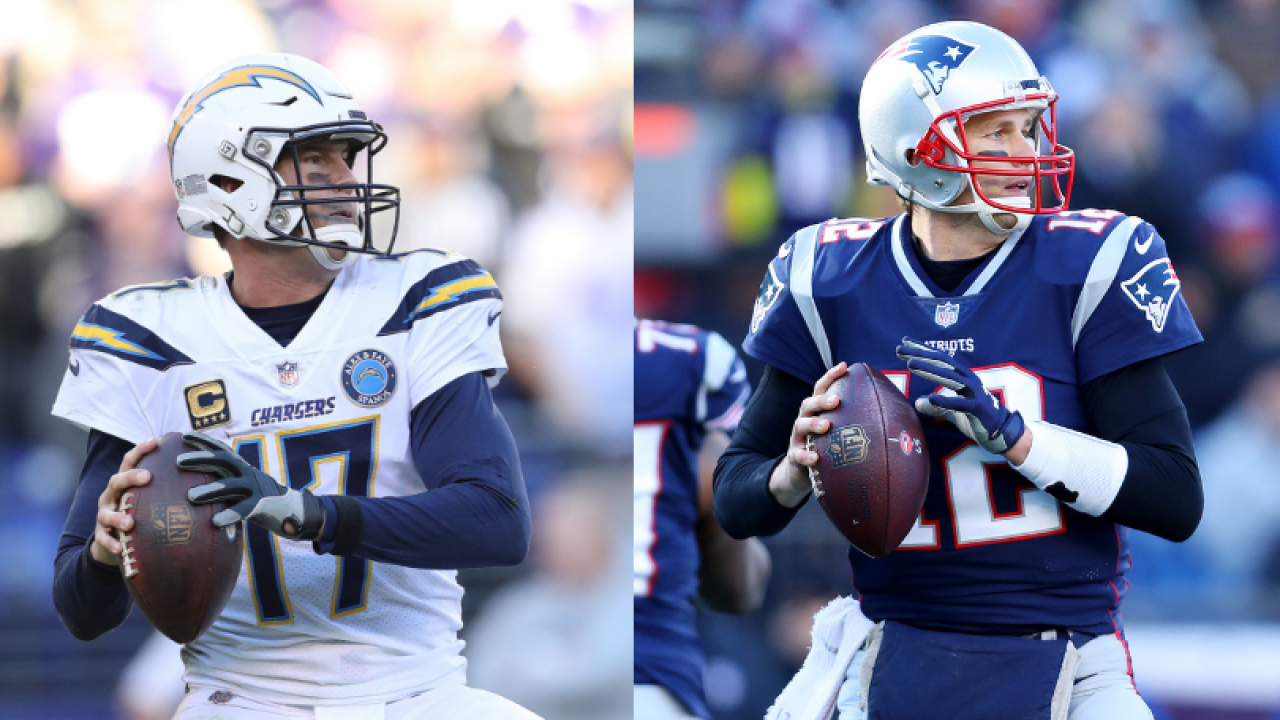 Sunday will be the first time that Philip Rivers and Tom Brady have played against each other in the playoffs since the 2007 season. Picture provided by Getty Images.

FOXBOROUGH, Mass. — Two of the wisest, and oldest, quarterbacks in the National Football League will face each other this Sunday when the Los Angeles Chargers take on the New England Patriots — which is on News 3 at 1 p.m.

The 41-year-old Tom Brady will lead the Patriots (11-5) against 37-year-old Philip Rivers and his Chargers (13-4), who even with the better record, will be traveling cross-country to the East Coast for the second consecutive week because the Kansas City Chiefs finished first in the AFC West Division.

Sunday’s match-up featuring Brady (41 years and 163 days old) vs. Rivers (37 years and 36 days old) will make for the oldest combined age by opposing starting quarterbacks in a postseason game in NFL history.

It will be sort of revenge in the wait for the Chargers, who in 2006, lost a chance to make the Super Bowl when the Patriots beat them 24-21 in the AFC Championship after a late fourth-quarter comeback. The Chargers would also be ousted from the NFL playoffs again in 2007 by the Patriots. It would be the last time Brady and Rivers would meet in the playoffs until this coming Sunday.

While Rivers is 1-7 against the Patriots (but 0-7 all-time vs. Tom Brady), the Chargers are coming off a big win against Baltimore last week, and for a team that just moved from San Diego after the 2016 season, this Los Angeles Chargers team has embraced playing on the road. Rivers himself still lives in San Diego with his wife and eight kids, commuting to and from Los Angeles during the season.

The #Chargers are 0-7 against Tom Brady and the Patriots, including playoffs, since Philip Rivers became the starter in 2006

They travel to New England next Sunday@Patriots @Chargers

Even with a veteran quarterback in Rivers, it’s hard to win in Foxborough. For Los Angeles to win, they will have to depend on not only Rivers but their stout defensive front.

Defensive ends Joey Bosa and Melvin Ingram will both have to get to Brady on Sunday. They arguably one of the best defensive line duos in the league, with a combined 12.5 sacks and 46 tackles in the 2018 regular season.

It isn’t certain, but this may be the last time that we see these two future NFL Hall of Famer’s duel it out for a chance to advance in the playoffs. With the age of both quarterback and, other teams in the AFC progressing, these two old veterans realistically have limited time to match up again with a Super Bowl on the line. Many have even speculated that this may be Rivers’ last good shot at winning the Super Bowl — something he has not done, but that Brady has done five times.

Whoever wins on Sunday will play the Chiefs in the AFC Championship that will be played next Sunday, January 20, on News 3.

The difference between the #Chargers two 2018 playoff opponents: