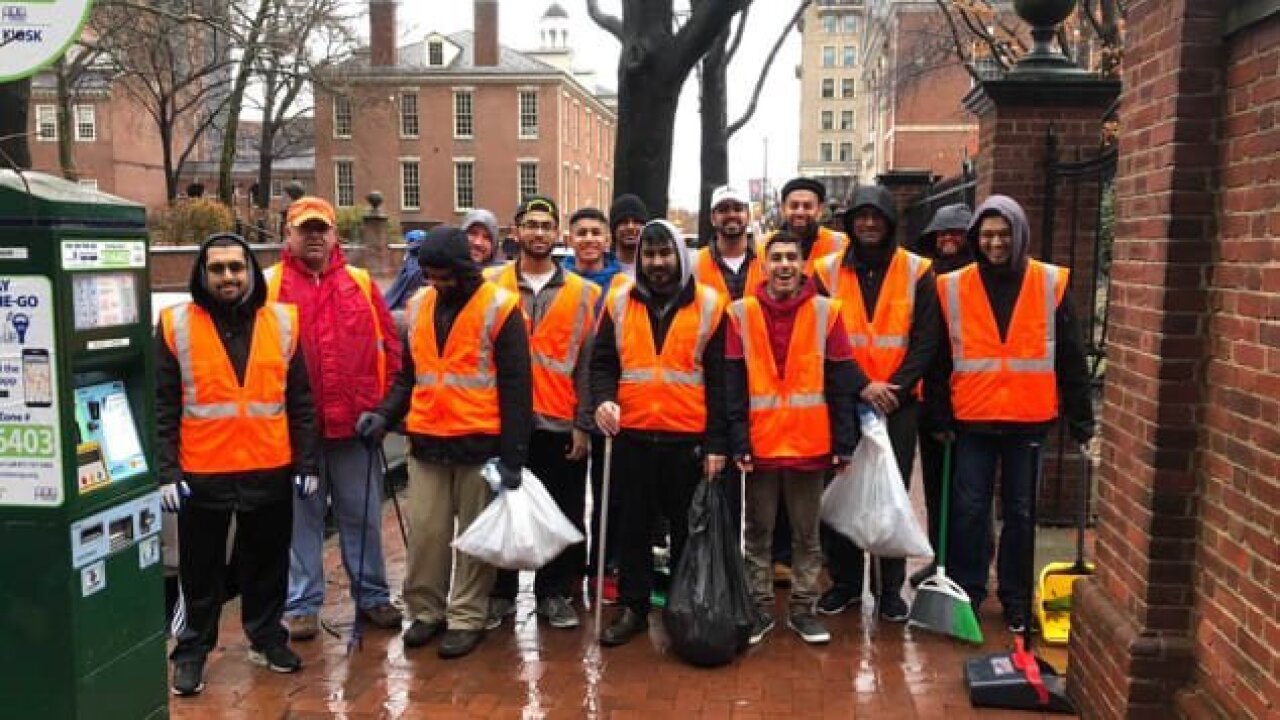 “I hope it shows that we’re not here just to talk about Islam the whole time,” Salaam Bhatti said. “We’re here to be part of America.”

National parks aren’t just forests filled with scenic trails. They are national treasures that hold years of history and monuments that represent our nation’s heritage. That’s why these citizens feel the need to keep them clean as the partial government shutdown in the United States continues.

There are more than 50 US national parks, and in an unprecedented move, the Trump administration decided to keep the gates to some of these parks open during the shutdown.

On Sunday, the National Park Service said it would use reserved money from visitors fees to keep up with operations at parks around the country. However, most parks are operating with very little to no staff.

“We are taking this extraordinary step to ensure that parks are protected, and that visitors can continue to access parks with limited basic services,” read a statement from the agency’s deputy director, P. Daniel Smith.

But with a quarter of the federal government workforce off the job or working without a paycheck, agencies like the National Park Service are struggling to keep the vast acreage clean.

The overflowing trash cans, near-capacity pit toilets and litter in the parks have prompted communities to organize cleanup crews. Here are some of the folks who are trying to keep the national parks beautiful:

Marc Newland and his family have been organizing cleanup crews for more than 15 years as a way to give back to their community. After hearing about the government shutdown and how it would affect the Great Smoky Mountains, a place the family visits often, Newland’s 10-year-old daughter, Erica, knew she wanted to keep it clean.

“We were supposed to go hiking, but she decided that it was better for us to pick up the litter accumulated in the trailheads,” Newland said. “After all, the busiest visitor week of the year had just ended,” referring to the holiday season, when many travel to experience the magic of the Smokies.

On January 3, the dad-daughter duo grabbed some plastic bags and called themselves the “Government Shutdown Litter Patrol.”

Newland shared the cleaning outing on Facebook, and it quickly made headlines, prompting others to help clean up.

“It was a fun and very rewarding day for both of us and Erica says that she would like to challenge other hikers to take one day off from getting in miles and impressive vista pics and instead, give back by grabbing a trash bag, heading to the park and collecting some litter!!” the post read.

Since then, Newland and his family worked along the nonprofit Keep Sevier Beautiful to organized a cleanup for Thursday, inviting anyone who wants to help keep the park clean. Newland said he expects to see 30 to 50 people join the litter patrol that day.

“These mountains give so much to so many people. Imagine if only a fraction of those people decided to give back to the mountains,” Newland said.

During the government shutdown, Yosemite National Park in California remains open and concessions are operating normally. However, like every other park, its staff is limited.

So the Yosemite Climbing Association, a nonprofit organization that focuses on preserving and protecting Yosemite’s climbing history, has volunteered to provide the public with gear to help clean up the park.

Through a campaign called #LeaveNoTrace, the nonprofit has been leaving a red pickup truck — along with a white covered trailer — filled with grabbers, gloves, bags and orange safety vests for use by anyone interested in cleaning, and people are taking them up on the offer.

Dakota Snider was one of dozens of volunteers who showed up to the park full of energy and ready to clean.

“Picked up a couple hundred pounds of trash today! Thanks everyone!” Snider said as he shared the group photo of volunteers on Facebook.

The YCA organized the cleaning campaign on January 2, after members noticed that trash bins around the park were overflowing and people were helping clean up but leaving the trash bags next to the bins.

“I know people meant well, but the wildlife was getting to the bags and ripping them apart,” YCA President Ken Yager said. “So, I decided to alert the public through Facebook of how that was affecting the animals and the response was incredible, people began to take their trash with them.”

Yager said the park has been staying clean since, but the first week of the year was probably the most difficult to maintain because visitors were still going to the park to enjoy their holiday vacation.

“I really hope this gets resolved soon. The traffic has slowed down but once the nicer weather and more holidays come around, we will be in serious trouble,” Yager said.

Yager was one of many locals who had to leave the area in late 2018 when the Ferguson Fire burned 96,901 acres and prompted officials to close areas of the park.

“People need to understand the shutdown is not affecting just federal workers. This is also affecting people like myself. I work for the park service — just like many others do. We already got hit hard from the fire and had to evacuate for a month and could not work. Now with no paycheck, this is really brutal,” Yager said.

Because of snow and other weather conditions, the truck with supplies has to be moved around the park, but Yager said he will update the organization’s Facebook page with the truck’s location.

“I hope it shows that we’re not here just to talk about Islam the whole time,” Salaam Bhatti said. “We’re here to be part of America.”

Dozens of volunteers from the Ahmadiyya Muslim Youth Association showed up to sites across the country to pick up litter, empty garbage cans and sweep the grounds.

From Everglades National Park in Florida to Joshua Tree in California, the Cuyahoga Valley in Ohio, outside Independence Hall in Philadelphia, and on the National Mall in Washington, members of the crew were on the scene to clean.

“Service to our nation and cleanliness are important parts of Islam,” said Dr. Madeel Abdullah, president of the youth group, in a press release. “We could not sit idly by as our national parks collected trash. We will lead by example and dispose of this garbage appropriately and invite all Americans to join us in these parks and others across the nation.”

Group members were joined by nonmembers who contacted the group through social media, spokesperson Salaam Bhatti said, adding that the response to their efforts has been “overwhelmingly positive.”

Bhatti said members regularly participate in community cleanups, carried out as part of their faith. The group has logged almost 200,000 hours in cleanup projects since 2016, according to Bhatti.

An important part of Islam is to help “wipe away the tears of our neighbors during time of distress,” Bhatti said. “We are humbly serving our nation at a time when many tears are being shed.”

If the shutdown continues, the group will be looking for other national parks to help clean up, as well as finding other ways to help those affected by the shutdown.

The Friends of Joshua Tree

Although the shutdown will force temporary closure of the Joshua Tree National Park on Thursday, these volunteers have been climbing into dumpsters to haul off trash, cleaning up toilets, and trying to service as many park bathrooms and trash cans as possible.

Covering more than 792,000 acres from Palm Springs north to the town of Joshua Tree in California, this national park receives anywhere from 1 million to 2 million visitors a year, and it only took a week for the park to feel the pinch of the shutdown, as officials were forced to close the campgrounds because of sanitation and safety issues.

Knowing the amount of visitors their beloved park gets daily, members and volunteers from the nonprofit Friends of Joshua Tree joined forces to clean the park. They began gathering daily at 10 a.m. on December 30.

John Lauretig, the executive director of the nonprofit, spent part of New Year’s Day cleaning up and said the group has had as many as 40 volunteers on one day (but most days they get a handful).

The team has been sharing its daily work via Facebook through the Cliffhanger Guides, a rock climbing guide service in the park.

“Yesterday we had several trucks and trailers in the park hauling trash out of overflowing dumpsters and the usual cadre of toilet angels taking care of cleaning and restocking bathrooms throughout the park,” one of the posts read.

On January 6, the team shared its latest update, noting that nearly 40 volunteers showed up, along with members from the Southern California Overland Association, and thanked other organizations for finding more volunteers to help.

“It takes 2 villages to keep a park!” their post said.