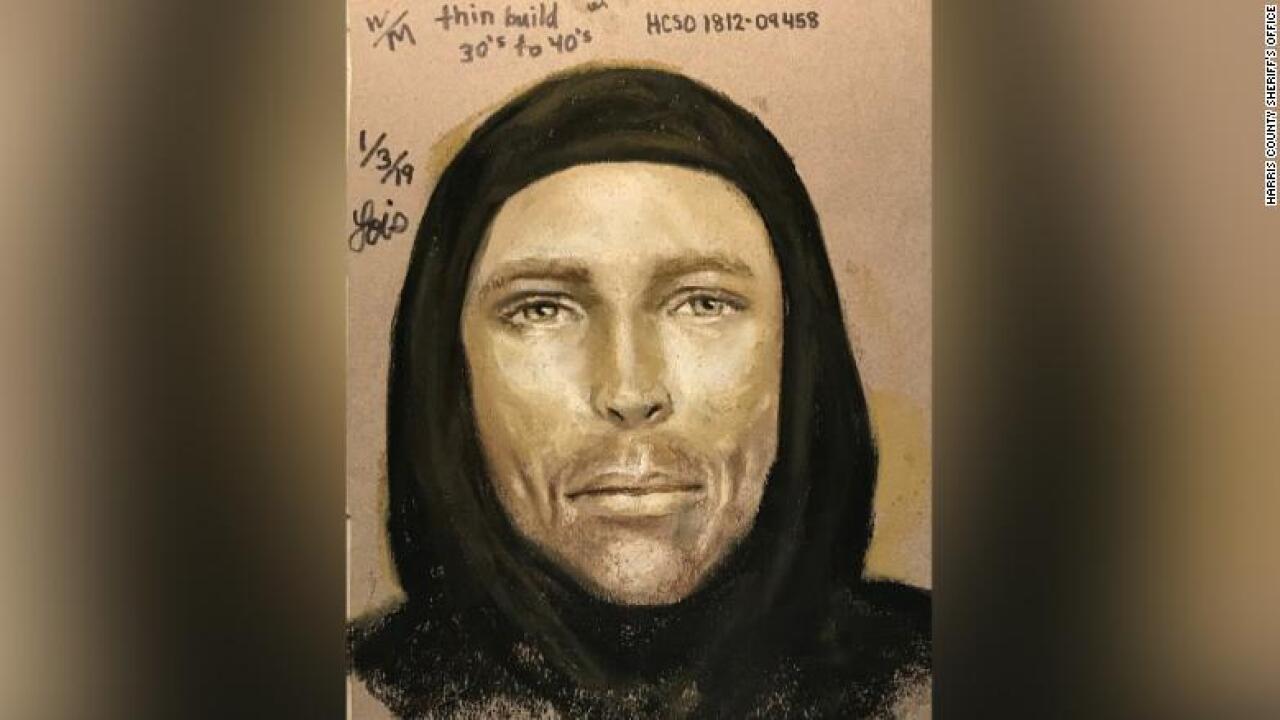 Investigators on Thursday released a composite sketch of a suspect in the shooting death of a 7-year-old girl in the Houston area over the weekend.

The shooting of Jazmine Barnes, who was killed as she was riding in a car with her mother and three siblings early Sunday, has gained national attention. Tips have poured in to investigators in Harris County, but the suspect is still on the loose.

The sketch was compiled from descriptions from Jazmine’s family members who survived after a man opened fire on them for no apparent reason. The Harris County Sheriff’s Office also released an enhanced surveillance video of a red pickup the gunman was driving at the time of the shooting.

Information from Jazmine’s sisters, who are grappling with the trauma of seeing their sister killed, may be key to finding the killer. In the meantime, the public has vague descriptions of what to look for: a white man, with a 5 o’clock shadow, in his 40s, and the red, extended-cab pickup.

“We want to make sure that we get the right person as quickly as possible,” Gonzalez said earlier.

No one except the gunman knows why he shot into the car driven by Jazmine’s mother around 7 a.m. Sunday in eastern Harris County.

But out of this tragedy came solidarity in grief.

A $100,000 reward is now available for information leading to the arrest of the killer, social justice activist Shaun King announced.

And more than 1,600 donors have contributed to a GoFundMe account for Jazmine’s funeral expenses and family, as the girl’s mother recovers from a gunshot wound and some of her three sisters recover from injuries caused by shattered glass in the attack.

A community rally and funeral

Jazmine will be memorialized Tuesday during the “Justice for Jazmine Barnes Community Rally.”

The event will honor “all murdered victims in Houston/Harris County,” organizers said.

Services for Jazmine will begin at 10 a.m. Tuesday with a viewing at Green House International Church, followed by her funeral at noon.

Afterward, mourners will release purple balloons in her memory.

Jazmine was still in her pajamas Sunday morning when she and her mom, LaPorsha Washington, went on a predawn coffee run to a convenience store.

It was about 7 a.m. The family woke up early because Washington’s mother was visiting. They were already looking forward to preparing Sunday dinner.

But as the family drove near a Walmart, a man in a red or maroon pickup truck pulled up next to their car and started firing, the sheriff’s office said.

The gunfire shattered the mother’s driver’s side window, Washington told CNN affiliate KTRK. She said the truck’s driver then sped up to get in front of the family and continued shooting.

“I didn’t provoke him in any kind of way,” the mother said.

Washington said she suspects the attack may have been racially motivated. She said she didn’t have tinted windows, and the gunman could see “a black mother with four beautiful children, girls, in this car.”

The sheriff said the family didn’t appear to do anything to incite the truck’s driver.

“There was nothing to indicate that the family did anything wrong in any way,” Gonzalez said. “They were simply just driving along the service road when this happened to them.”

The sheriff’s department is asking anyone who has surveillance video near Wallisville Road and E. Sam Houston Parkway to check their footage for possible clues.

The widespread impact of Jazmine’s death

The inexplicable killing has afflicted mourners near and far.

Bernice King, the youngest child of the late Rev. Martin Luther King Jr., said there needs to be more public dialogue about what happened to Jazmine.

“Just a baby,” King tweeted. “It is truly unconscionable what’s happening to children in America and how the murder of this precious little Black girl isn’t permeating our media as much as a wall. Does America care about Black and Brown babies inside or outside of its borders?”

And even for officers accustomed to horrific crimes, Jazmine’s death has had a profound personal impact.

“Help us find this monster before he murders another innocent child,” tweeted Joe Gamaldi, president of the Houston Police Officers’ Union. “Prayers for Jazmine’s family, no parent should have to bury a child.”

Attorney S. Lee Merritt, who is advising Jazmine’s family, said the grief is compounded by the unknown.

“The inability to capture or even identify this killer is really weighing heavily on that family,” he said.

Jazmine’s father, Christopher Cevilla, thanked the countless supporters who are trying to help. He also had a message for anyone who might know about the attack:

“I just want anybody, whoever, out there that knows anything about the murder of my daughter, to just please step up as if it was your own,” Cevilla told reporters. “Just put yourself in my shoes, in my family’s shoes.”