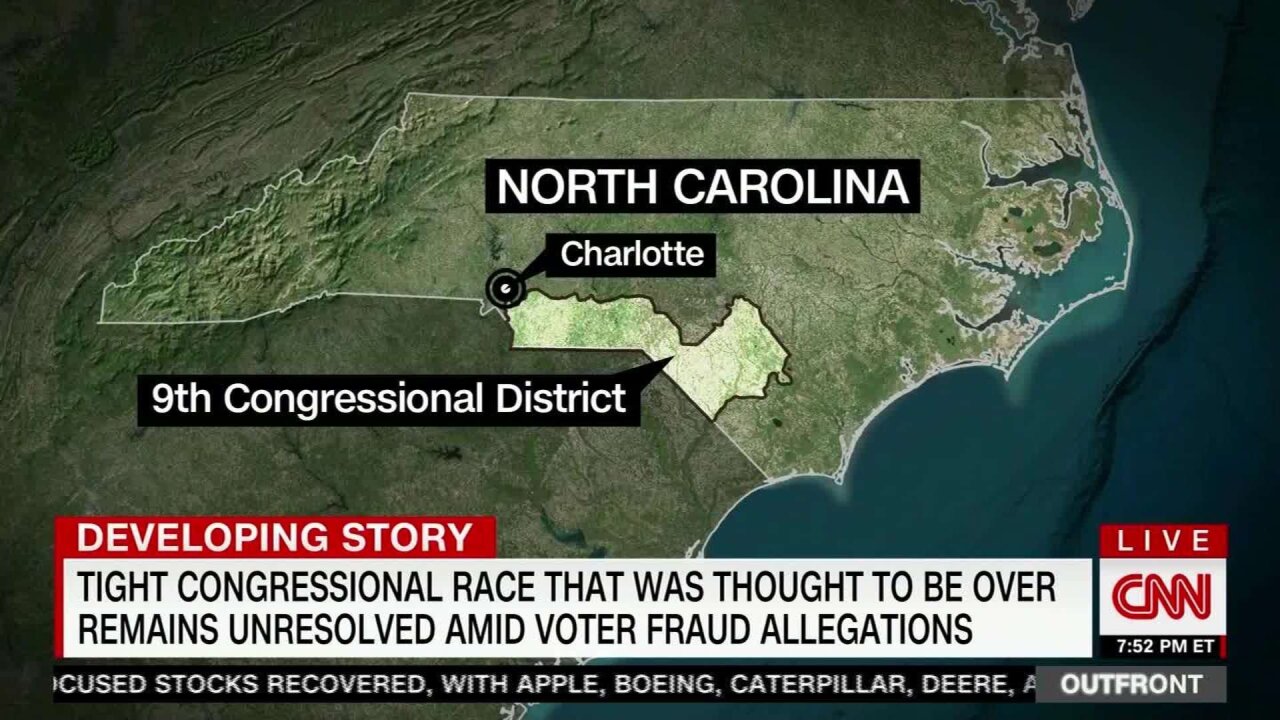 The campaign of Republican congressional candidate Mark Harris filed an emergency petition on Friday to certify the results of the race in North Carolina’s 9th Congressional District, setting up a potential legal fight over an election that has been tainted by allegations of fraud in some of the district’s rural counties.

The North Carolina state board of elections dissolved Friday without certifying results from the 9th Congressional District, throwing into doubt a race tainted by allegations of election fraud.

Republican congressional candidate Mark Harris filed an emergency petition on Friday to certify his lead in the November election, moments before the nine-member board disbanded on noon Friday and ahead of the new US Congress convening on January 3.

The board had refused to certify Harris as November’s winner amid evidence of irregularities in the absentee ballot count and reports of a fraud scheme directed by a Republican operative hired by Harris’ campaign.

Harris leads in the unofficial tally of the 2018 election by 905 votes over Democratic candidate Dan McCready.

McCready’s campaign and the North Carolina Democratic Party did not immediately return CNN’s request for comment.

In its petition, the Harris campaign wrote to the board that it, “is not aware of irregularities or other concerns sufficient in number to change the outcome of the election in the 9th district.”

Earlier Friday, before filing the petition, Harris told WBT radio in Charlotte he is willing to take the fight to court if the board doesn’t certify the results of the election.

The board did not comply with the request before its noon termination.

Though the board has dissolved, board staffers can continue to work on the investigation, but they will not be able to issue subpoenas, hold hearings or call for a new election, said Josh Lawson, the board’s general counsel.

“As you know, your client (Harris) is under a subpoena dated December 1, but has made only one production on December 7 totaling 398 pages,” the board’s former chair Joshua Malcolm wrote in its response to the Harris campaign’s petition. “Yet your client through counsel indicated that you possess roughly 140,000 additional documents that may be responsive but have not yet been produced. We have received repeated assurances—as recently as December 24—regarding your efforts to comply with the subpoena.

He added, “You are hereby requested to fully comply with the Board’s subpoena so as to not further impact the agency’s ability to resolve the investigation.”

The campaign of Republican congressional candidate Mark Harris filed an emergency petition on Friday to certify the results of the race in North Carolina’s 9th Congressional District, setting up a potential legal fight over an election that has been tainted by allegations of fraud in some of the district’s rural counties.

The board had planned to hold an evidentiary hearing in the case on January 11, 2019.

The board’s current structure had been struck down before the 2018 election, but the court had delayed implementing that order until now.

In their ruling Thursday, the judges said the board had not complied with previous court orders and that they had not provided enough information about why the hearing had been delayed.

There is also uncertainty over the makeup of the elections board. A new state law requires Democratic Gov. Roy Cooper to appoint a new board, but not until January 31, 2019.

In a letter Friday to both state party chairs, Cooper said he will appoint a temporary five-member board under the old rules to preside until the end of January “to hasten the investigatory work by the Board and maintain continuity.”

State Republicans have said Cooper does not have the authority to do so and plan to challenge that in court as well. The party has also said they will not accept appointments to the temporary board Cooper is trying to establish.

The state elections board had been expected to call for a new election in early 2019 if it was able to corroborate the evidence of irregularities in the 9th district race.

“To date, the State Board’s investigative staff has conducted more than 100 interviews, and the staff is actively engaged in the review of more than 182,000 pages of materials produced in response to 12 subpoenas issued by the State Board,” Joshua Malcolm, the Democratic chair of the board, said in an affidavit filed in court on December 21.

Harris has denied any wrongdoing. In his interview with WBT radio, Harris defended his decision to hire Dowless, saying that the GOP operative was recommended to him by political leaders he trusted in the state.

Harris claimed specifically that Dowless said he does not collect, or “harvest,” absentee ballots, which Dowless is accused of doing and is an illegal practice in North Carolina.

He also floated a conspiracy theory that the elections board, which is made up of both Republican and Democratic members, purposely held on to that information to prevent him from winning the election.

“Did they decide that they would sit on this and they would wait, and they would see and somehow if $11 million and Dan McCready couldn’t beat Mark Harris, this would be an insurance policy that they would play to get a do-over?” Harris asked. “I would hate to think that we had an agency in our state government that would operate with that kind of sinister leadership, but I am telling you the facts are the facts, they sat on this and we could’ve known what was happening there, and I just think it is sad.”

The state’s Republican Party applauded the Harris’ campaign’s decision to file a petition in court.

“It is important to note that no serious evidence of some of the most concerning allegations including widespread destruction of ballots ever materialized,” North Carolina Republican Party Chairman Robin Hayes said in a statement Friday. “There is simply no concrete evidence to show that even the mishandling of some absentee ballots amounted to a change of more than a thousand votes in this race.”