Virginia Beach inmates read to their kids this Christmas 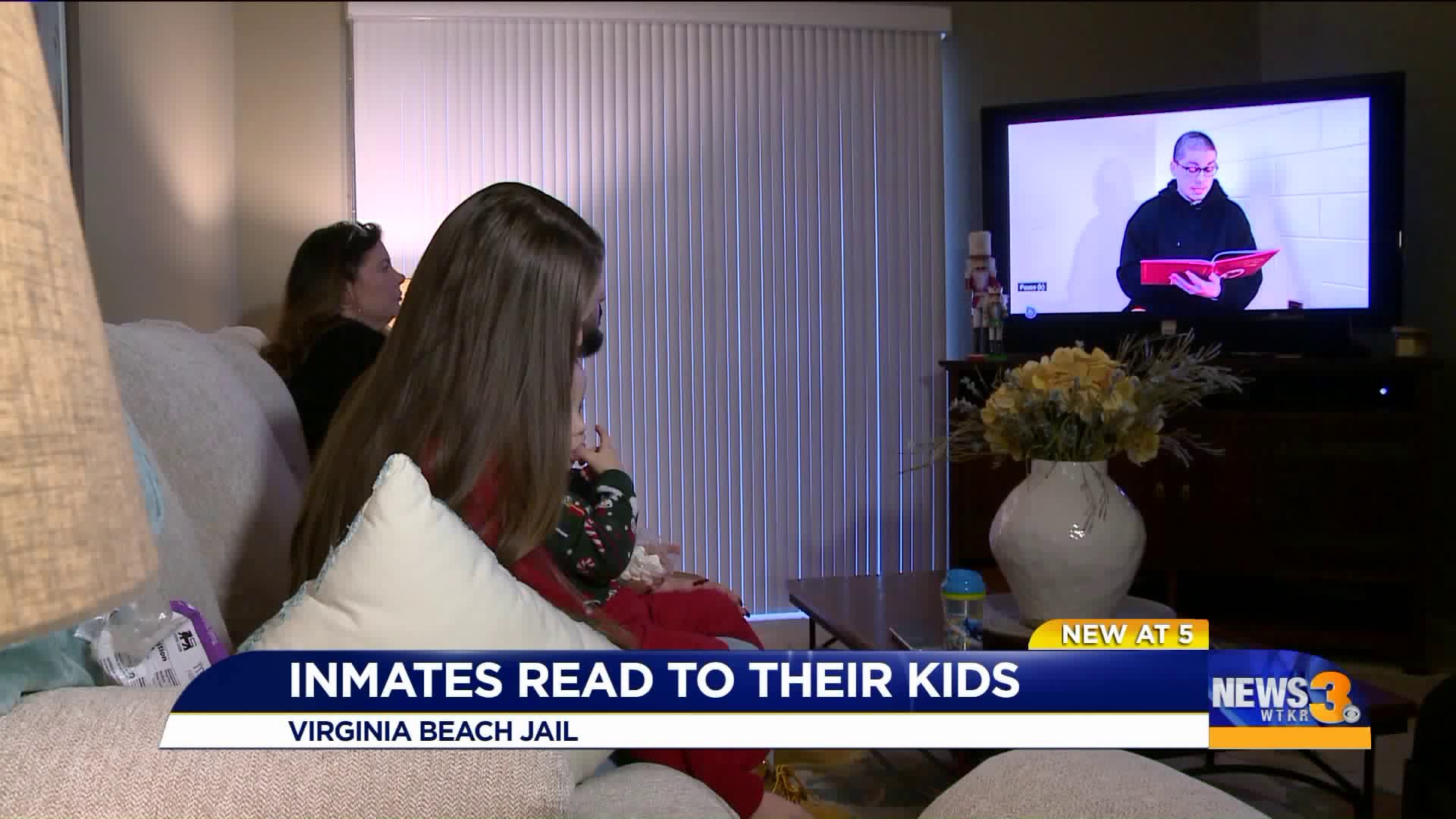 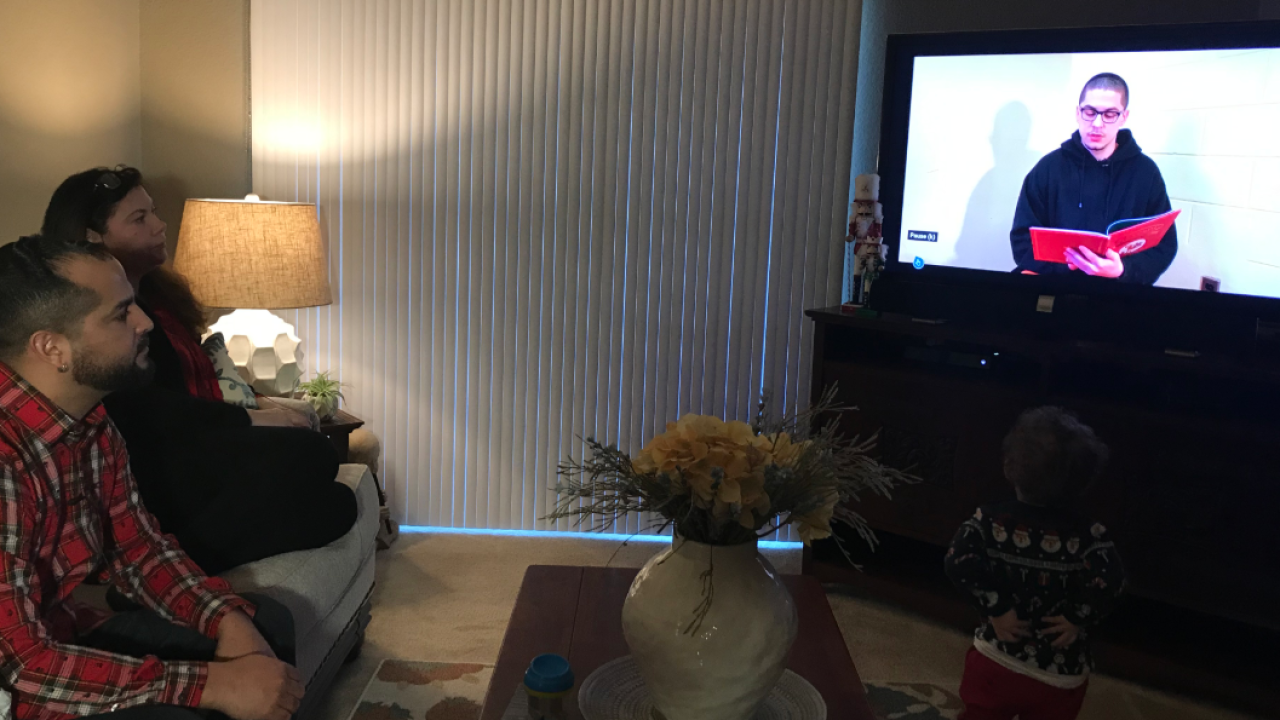 VIRGINIA BEACH, Va. - Inmates in the Virginia Beach Jail read to their kids from behind bars on Christmas Eve.

Being locked up this year can be difficult, but it's especially tough for the inmates’ family members.

Virginia Beach Jail officials recorded Anthony and a few other inmates reading Christmas stories to their kids and then sent a link over to the inmates' family members. They made a personal video and put it on YouTube.

That way, families could watch the videos whenever they wanted.

“I think it’s great for him and for us,” said Debra Arizmendi, Anthony’s mother.

News 3 met up with Anthony’s family Monday as they played the video.

Debra Arizmendi said it’s sad to know her son’s in jail, but she supports the new effort to have inmates read to their kids.

“He is my son. I miss him,” said Christopher Arizmendi, Anthony's father.

Anthony and the other inmates who were selected to read are part of the Reentry Program at the Virginia Beach Jail.

“It gives a lot of us the help that we need as returning citizens,” said Anthony.

Through the program, the inmates are educated on a bunch of different topics to help them prepare for release.

The program touches on topics like public speaking, interviewing for jobs and handling personal finances.

“It’s been good so when you get back out, you can be a little bit more confident,” said Geryl McCoy, “and you can start your journey on a better life.”

“They’re not all bad. These guys are family people just like you and I,” said Victoria Thomson, the Chief Deputy of Operations at Virginia Beach Jail.

Anthony’s loved ones can’t wait for him to return, and his mother offered advice to others this holiday season: “Mind what you do in life because this is what could happen. You are going to miss out on quality time with family.”

Anthony is expected to be sent home this March.

Jail officials said they would like to continue the book reading program in the future.

Below is information about the Virginia Beach Jail about their Reentry Program:

The Virginia Beach Sheriff’s Office created the Reentry Program in August 2014 in an effort to reduce recidivism by providing offenders with the knowledge and skills needed to successfully integrate back into the community as productive members of society. The program was created without any additional funding from taxpayers. Instead, the Sheriff’s Office utilized existing resources and partnered with state and local organizations, including the Virginia Beach Department of Human Services (DHS), Opportunity Inc., Wells Fargo and the Virginia Department of Motor Vehicles, which provides Reentry Program inmates with identification cards. The program merged with the DHS’s Jail Education Services (JES) last year and includes classes in family dynamics, finances, employment skills, anger management and complying with probation and child support, among other topics. Inmates in the Recovery Program are automatically transitioned into the Reentry Program upon their completion of the substance abuse curriculum. In addition, the program works with the Virginia Department of Corrections and Virginia Beach Probation and Parole to provide home care plans and community resources for people leaving the jail. Reentry staff works with City Social Services and the Re-entry Council to provide job fairs, informational bulletins and other services and is teaming with STOP Inc. to offer state job certifications and employment assistance upon inmates’ release. The Reentry Program marked its three-year anniversary this year and continues to have successful results, with 85 percent of participants — called “returning citizens” — being permanently released from the Correctional Center. That means they did not recidivate — or commit new criminal offenses — in Virginia Beach after their release. This would make the measured recidivism rate approximately 15 percent. That is a dramatic reduction from the jail’s overall recidivism rate, which is estimated at 40 percent for all offenders serving six months or more. Nearly 250 inmates have graduated from the Inmates learning about resume writing as part of the Reentry Program.