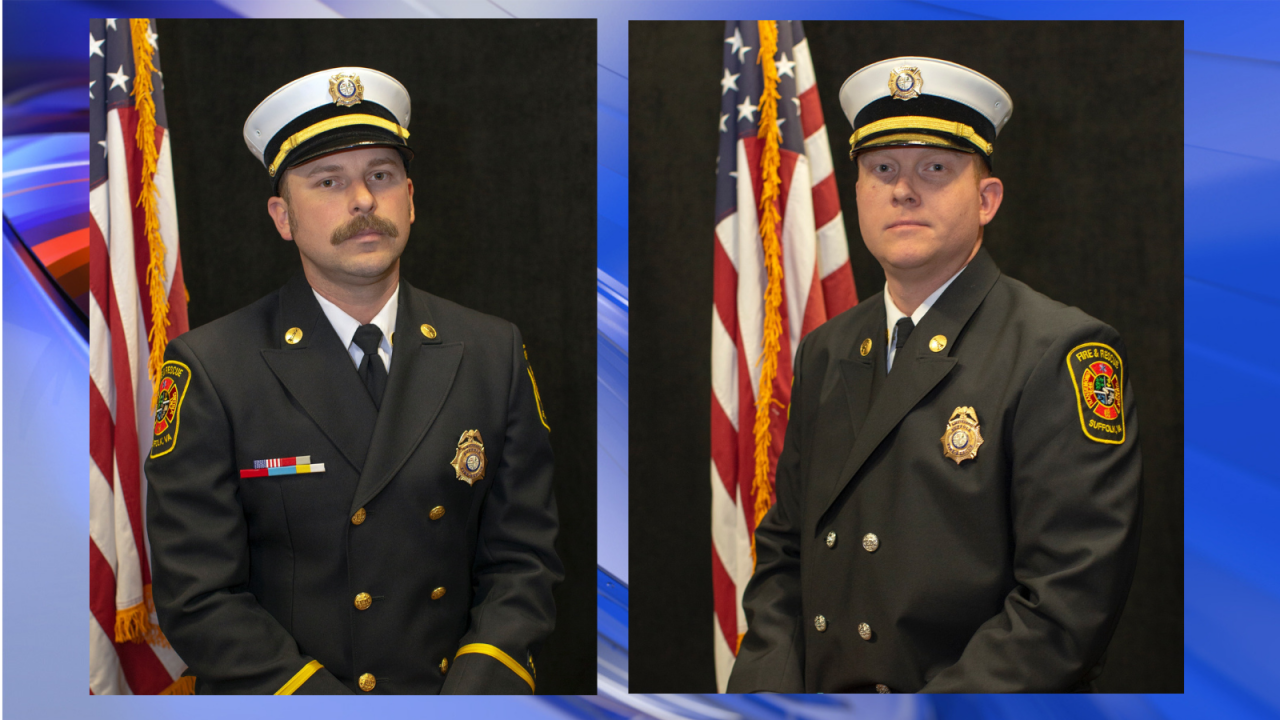 Lieutenant Christopher K. Hehl on the left and Lieutenant Roger W. Stinnette, Jr on the right

SUFFOLK, Va. – The Suffolk Fire & Rescue Department and Fire Chief Michael Barakey have proudly announced the awarding of the Firefighter of the Year and Paramedic of the Year honors for the department.

Lieutenant Christopher K. Hehl on the left and Lieutenant Roger W. Stinnette, Jr on the right

Lieutenant Christopher K. Hehl joined the Suffolk Fire & Rescue Department in September 2006. Lt. Hehl received his Associates in Science Degree from Tidewater Community College in 2006. He was promoted to Lieutenant in August 2016 and is currently assigned to Station 1, Engine 2, “C” Shift.

In the nomination for Lt. Hehl, he was credited with bringing personality, passion, motivation, inspiration, organization, book smarts, street smarts and a charisma that is hard to come by to the profession. His passion for the job was lauded along with his performance on the scene of incidents and ability to communicate with others. Lt. Hehl was noted to remain calm, focused, clear and concise while being decisive.

Lieutenant Roger W. Stinnette, Jr. joined the Suffolk Fire & Rescue Department in March of 2002. Lt. Stinnette completed his Paramedic Certification in 2001. He was promoted to Lieutenant in August 2016 and is currently assigned to Station 6, Engine 6, “C” Shift. Lt. Stinnette was also selected as Paramedic of the Year in 2007.

In the nomination for Lt. Stinnette, he was noted to be an exceptional ALS provider that is always calm, focused, clear and concise. Lt. Stinnette keeps personnel informed of all important issues related to equipment, hospital interactions, patient encounters, and unusual calls. He continually exceeds the minimum hourly requirements for re-certification while keeping super current with the ever changing world that is EMS. He takes advantage of many extracurricular activities to keep sharp.

His role as a SWAT medic provides his team with another set of ‘out of the box’ skills that allows him to be a resource during calls of behavioral emotional stress as well as blunt and penetrating trauma emergencies.