What makes eggnog so addictive? 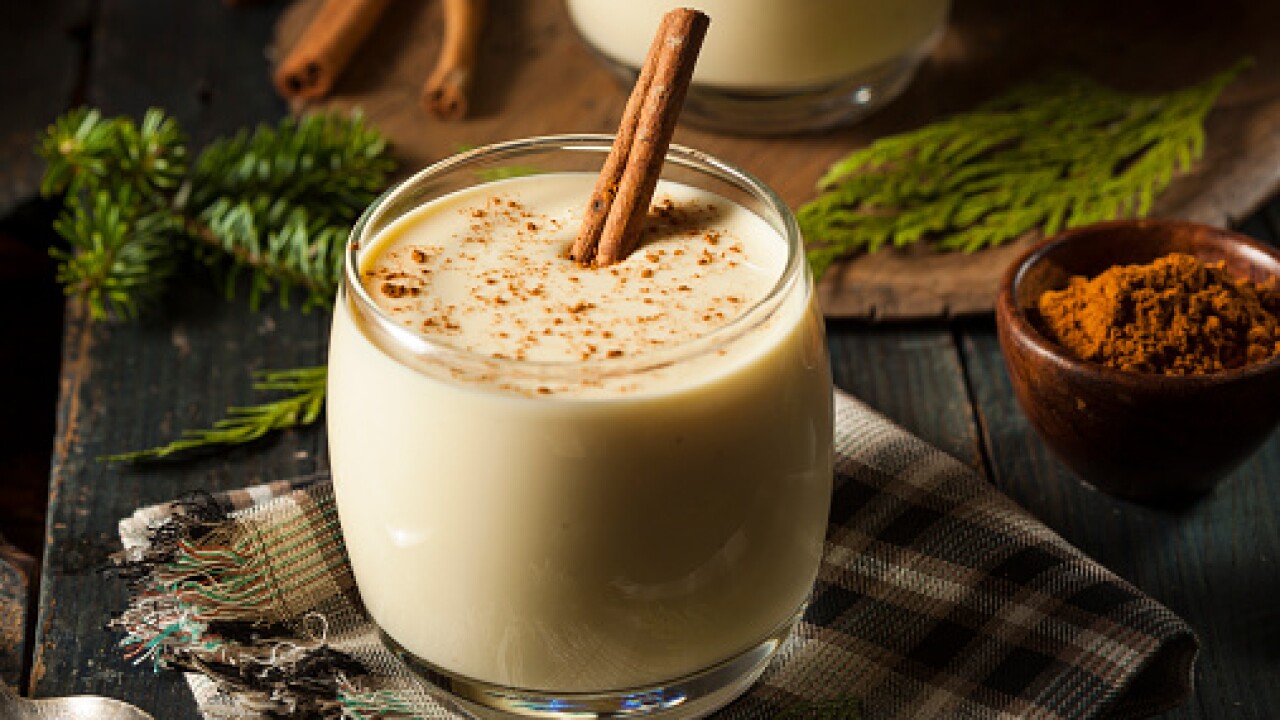 Some of these are more universally enjoyed than others. But I wondered what exactly makes eggnog such an enticing treat between Thanksgiving and Christmas. I asked some experts in the sensory and food technology fields for insight.

“It’s like ice cream. … It’s cold, and it’s sweet, and it tastes good, especially when you haven’t had it for 10 or 11 months,” said Steven Young, a consulting dairy and food technologist based in Houston and principal of Steven Young Worldwide, a technical and marketing consultancy.

In fact, eggnog dates back decades, and it was often consumed as a riff on classical French vanilla ice cream or custard.

“You would start by taking just regular ice cream mix with egg yolks in it, which are added for color and flavor,” Young said. A manufacturer might add more yellow color to the mix, in order to make it even more compatible with the egg yolk, similar to the color of a manila folder, according to Young. And then of course, you add vanilla, nutmeg and cinnamon.

“It’s a lot easier to take plain ice cream mix and ‘dress it up’ to become eggnog. For all intents and purposes, that’s what eggnog has been,” Young said.

Ice cream mix consists of cream, milk and sugar, and it is very thick before it’s whipped and frozen because there’s no air in it. But the thickness is perfectly suited for making eggnog, as it allows the mixture to be stable enough to tolerate being diluted later with alcohol, ultimately giving it a mouthfeel and flavor that is compatible with what you are looking for in the final product, Young explained. “That’s the dance.”

Alternatively, rather than drawing off a classic ice cream mix, companies may create an eggnog beverage from whole milk that is heavy and thick enough to withstand the rigors of ice as well as alcohol, Young explained.

An ingredient known as pasteurized sugared egg yolk (which is also used in French vanilla ice cream mix) is added to the milk, acting as a source of eggy flavor and color. The mixture is then heat-treated (pasteurized and cooled to refrigerator temperature) to ensure that it is safe to consume.

“You have caramelized sugar with cooked egg and dairy, and it unifies beautifully with the vanilla and brown spirits,” said Gail Vance Civille, founder and president of Sensory Spectrum, a consulting firm that helps companies learn how sensory cues drive consumer perceptions of products. “For a lot of people, it’s the richness of the fat and flavor of the custard that gives eggnog its sensory appeal.”

Some companies sell eggnog bases, which are pre-formulated mixtures of ingredients with specifically designed flavor qualities. These mixtures can be incorporated into milk or an ice cream mix, and they offer manufacturers a convenient, efficient and microbiologically safe way to produce large scale quantities of eggnog.

These mixes can also be formulated to be compatible with specific varieties of eggnog, for example, reduced fat or fat-free milk-based nogs or plant-based nogs, such as soy, almond and cashew.

As with other food products, the quality of eggnog ingredients matters. According to Civille, prepackaged eggnog made with powdered egg and artificial vanilla flavors or nonfat dry milk powder will not offer a rich, eggy nog.

“It should be made from real whole milk cooked to a custard with real eggs, and it should have real vanilla in it,” Civille said.

The role of sugar in eggnog

Could the amount of sugar in eggnog also contribute to its “addictiveness”? Sugar’s addictive properties have been studied, and ice cream mix used to make eggnog contains its fair share, both from the milk sugar lactose and from added sugars.

“Mathematically, basic eggnog has a lot of sugar, but by the same token, you have to expect it to have enough viscosity, flavor and sweetness to be diluted later with ice or alcohol and still be able to carry its sensory appeal,” Young said. “There is a lot of to manage, and this puts pressure on the inherent sweetness of the mix, in order to deliver the desirable sensory appeal of the finished beverage.”

A quick look at the nutrition facts labels for a sampling of store-bought eggnog reveals that the holiday drink often tops 20 grams of sugar — the equivalent of 5 teaspoons — for a mere half-cup serving.

“The amount of sugar will depend on the recipe and brand you buy. Some have tons; others don’t … but if it is loaded with sugar, it can become a dessert instead of a sweet beverage,” Civille said.

So we have a chilled, sweet, milky beverage, similar to ice cream and milkshakes. I wonder, is there something else that I missed when it comes to the magical appeal of eggnog?

I pressed Young once again to tell me the secret behind the allure of the holiday drink.

“We love it maybe because it’s cold and sweet — and all of a sudden, we get it for three or four weeks … kind of like ‘forbidden nog,’ ” he said.

“The day after Christmas, it’s over,” he added. “If any is left in the stores, you have to do something with it, because it just won’t sell. And after the first of the year, the novelty of eggnog goes down to zero.”